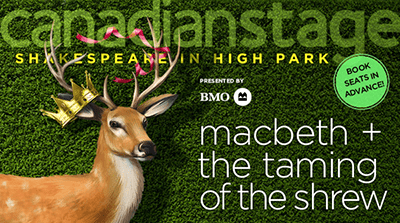 Fun Quiz: Which Shakespeare in the Park show should you see this summer?

Guys! Shakespeare in the Park is doing not one but TWO plays this year. Can you handle it?! A “rare repertoire summer”!! It’s all happening!

Shakespeare in a park is one of the #1 benefits of living in any large city, because most large cities and some smartypants towns have at least one outdoor Shakespeare company that pops up in the warmer months and sets our hearts and brains aflutter with some classic public domain works of art. This year’s offerings in Toronto’s High Park—on now until Sept. 1—are classic Scottish tragedy Macbeth and complicated-politics battle of the sexes The Taming of the Shrew (just pretend that last speech is sarcastic and you’ll be fine, feminist pals). While I certainly will not be able to skip either, maybe you are the busiest person in the world and can only see one, in which case, I am here to help you out. The following quiz will mark the first and likely only time my MA in “Shakespeare Studies” (hi) will ever come into use in my professional life. BEHOLD:

Prithee, which of these two merrie jestes should you see in ye olde parke? A QUIZZE.

A “friend” spreads a nasty rumour about you. You:
a) Straight up murder them.
b) Dress up as a teacher and teach them slowly over time the meaning of the word “respect.”
c) Hide behind an arras and yell devastating but witty insults at them until they ultimately stab you.

What’s the cutest thing you’ve ever done for someone you liked?
a) Killed a guy 😉
b) Trapped them in a basement and denied them basic food and water until they submitted to my authority 🙂
c) Wrote them some lame poems 😛

In high school you hung out with:
a) Goths
b) Jocks
c) Drama nerds

A personal pet peeve is when someone:
a) Hires two roadside murderers to kill your entire family.
b) Prefers your sister over you just because the entire country heard you were a ruthless bitch.
c) Hits on your mom.

At parties, you’re usually the one:
a) Screaming at a ghostly apparition.
b) Getting a peasant drunk enough to play a large-scale prank on when he wakes up, for the amusement of your wealthy friends.
c) Whining about the baked meats.

MOSTLY As
You’re a Macbeth, lady.

MOSTLY Bs
Check out saucy Katherina’s wooing/general abuse at the hands of Petruchio in Taming of the Shrew.

MOSTLY Cs
Hate to break it to you, but you are real into Hamlet. It’s not happening this summer, so maybe go see both? Macbeth has all kinds of kingship problems and Taming of the Shrew is nonstop weird gender politics, it’s all the fun of the Danish prince’s drama in two separate but equal productions!

Information on tickets—and a fancy cushion and seating area reservation service—is here. See you in the park! Bring bug spray!

Tags: MacBeth, Quiz, Shakespeare, Shakespeare in the Park, The Taming of the Shrew, Theatre