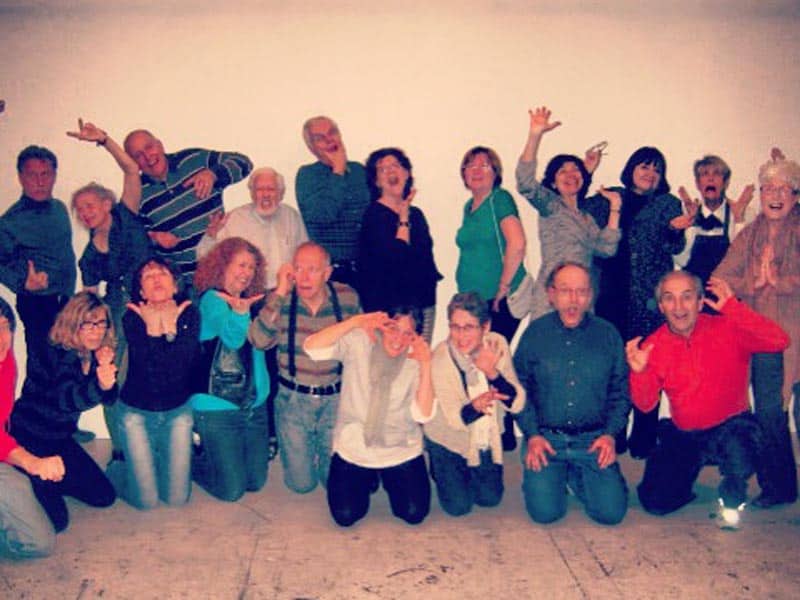 The Lady From Maxim’s begins like a late-19th century version of The Hangover.
Events & Culture

Fundraiser: The Lady From Maxim’s is a Sex Farce Featuring an Amateur Cast of (Predominantly) Seniors Working with Some of Toronto’s Hottest Theatre Talent

To raise funds for their upcoming production of Sarah Ruhl’s Passion Play, a triumvirate of Toronto’s hottest up-and-coming indie companies, Outside the March, Convergence Theatre, and Sheep No Wool, are producing a unique and very fun show. They’re working with a cast of amateur actors over the age of 40 (and mostly over the age of 65), to mount The Lady From Maxim’s, a French sex farce written in 1899. “We wanted to raise money the way we like to work”, says Amy Keating, who serves as choreographer and assistant director on the project. “The idea formed really naturally. [Artistic Associates] Julie Tepperman and Aaron Willis have worked with a lot of community theatre performers over 50 at Ryerson’s Act Two Studio, so it just made sense”.

Choosing the show initially proved a challenge.  They wanted to find something involving a large cast, their goal being to involve as many people as possible (for fundraising purposes), and to have the production truly feel like an event for those involved. Finding a large-scale play is no easy feat in a time when most shows are being written to accommodate increasingly smaller budgets… which is perhaps why community theatres tend to do the same few shows over and over. But this artistic team wanted to provide a different experience for their participants: essentially, no Our Town or A Midsummer Night’s Dream allowed.  “We read a bajillion scripts,” Keating says, before eventually stumbling upon George Feydeau’s The Lady From Maxim’s. The large-scale and rarely produced romp seemed a perfect choice and Tepperman (Autoshow, The Gladstone Variations) got to work adapting it: fleshing out the secondary characters, and updating some of the humor.

The team advertised the project at Act Two Studio, as well as at synagogues and community centres throughout the city, which led to audition-interviews, conducted by the show’s co-directors Mitchell Cushman (Terminus), and Aaron Willis (Other People). The two were looking for actors over 40 who fit the demands of the show, but more importantly, for those who simply love performing, and may not get an opportunity to do so often.  Soon, an eager cast of 26 was assembled to populate the audacious world of Maxim’s.

Which brings us to the content of the play itself. The Lady From Maxim’s begins like a late-19th century version of The Hangover. The protagonist—in this case a stuffy doctor—wakes up one morning at the eponymous Maxim’s, a Moulin Rouge-type burlesque/ brothel, with no recollection of the events of the previous evening. He soon pieces together that he has spent the night with one of the establishment’s dancers, hilariously named The Shrimp for her “soft, pink interior” (ooh-la-la!). Things escalate from there, with the doctor trying to hide The Shrimp from his stern, religious wife, while she (The Shrimp) accidentally gets mistaken for said wife and is forced to attend a party as her, wearing little more than her underwear!

If that sounds like taboo (albeit super-fun!) subject matter for a group of non-professionals mostly over the age of 65… it is! (one might say that the show “puts the ‘sex’ in ‘sexagenarian’”). Cushman, Willis and Keating had no bones about addressing their subject-matter head-on: “We had a session where we allowed everyone to ask any questions, and to state any problems that they might have, just to get it all out in the open.” But overall, the artistic team has been surprised and inspired by the openness of their cast: “they’re so willing to…I’m going to use the term ‘go there,’” Keating laughs. “It’s really amazing to see these individuals who may not be accustomed to doing so, take that risk, or go to that sexy place, or make that joke.”

The process culminates in a run this weekend at Factory Theatre. Although it’s too early to tell from a financial standpoint, from an artistic one, the process has already been a success. Not only have the participants gotten the opportunity to work in a professional environment; the professionals involved testify that they have learned a ton working with a cast so rich in life experience. And the audience will certainly benefit from the collaboration. “The amount of commitment and dedication that everyone has put into the project is something to celebrate. And the show is going to be really fun and funny. It’s going to be very exciting for people to watch.”

The Lady From Maxim’s begins like a late-19th century version of The Hangover.