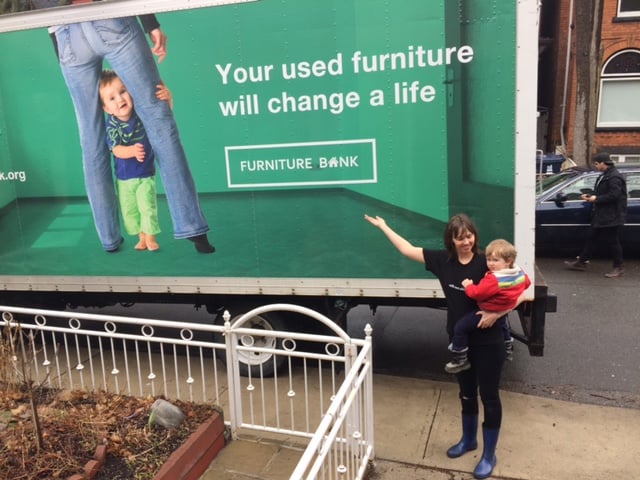 For months, we had an enormous piece of furniture in our home that we’d been reluctant to part with for sentimental reasons, but we also knew that while beloved, it was no longer practical in our space. Constantly mulling over the fate of its future, and after a few failed attempts to sell it, we finally found a solution: Furniture Bank, a local organization that transfers gently used furniture donations to people transitioning out of homelessness, women escaping domestic abuse, as well as refugee families trying to start a new life in Canada. Finally, parting with the oversized armoire, which has lived with me since birth, felt right.

In 1977, two years before I was born, my father took a job in London, England. He and my mom bought a flat in Kensington for 27,000 pounds. (Now it would likely sell for 4 million! Mom reminds me of this often.) They had no furnishings and so my mother, having a terrific eye for design and always one to take pride in thrifty finds, hit the auctions. She found a giant Edwardian mahogany armoire for 125 pounds, and it became their most cherished possession – one of the few pieces that filled their new space, and the one that made it home.

While my mom was pregnant with me in 1979, my father’s career took a turn, so they moved back to Toronto. Not willing to part with the piece, the giant armoire was shipped across the Atlantic Ocean. From 1979 to 1988, it lived in their bedroom. If I close my eyes, I can still envision Dad’s various wool sweaters that rested in the drawers.

In 1989, my parents divorced, and the armoire went with Dad from North Toronto to The Annex. In 2002, when he moved to Whistler, BC, I inherited the enormous thing, and it has lived with me in three homes since. It’s the one piece of furniture that has always been the most difficult to move and was ridiculously oversized for some of my apartments.

While I have a deep emotional attachment to it, the armoire was no longer practical for life with a small child. Our toddler is a fearless climber, and I have nightmares about him opening a drawer and attempting to climb this beautiful wooden piece with devastating consequences. It’s not made for that and would surely topple, even if secured at back, as it’s built in two pieces.

Over the years, the armoire has endured six moves; this piece has had its fair share of wear and tear. I lost one of the cupboard doors somewhere along the way, and there are lots of scratches and a couple dents, but the bones are strong, and the wood is unlike anything you’d find at IKEA or Urban Barn. My mother is convinced it has a real value and is worth something, so before I posted to Kijiji and Craigslist, I asked a few antique stores in Toronto if they were interested in purchasing it. While they found the piece intriguing, it wasn’t desirable to them because of the missing door. (Something my mother has cursed about since I lost it.) 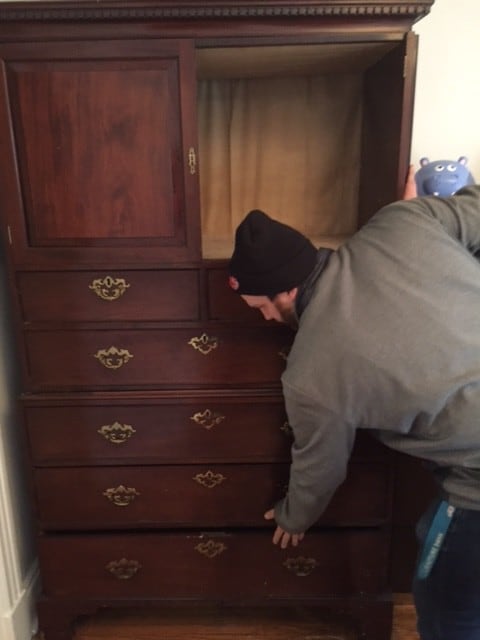 Posting on sale sites at a low rate did not prove successful, and not one of my 2600 friends on Facebook even wanted it for free! Minutes before I was about to post on Bunz, I learned about Furniture Bank, and I’m so glad I did. Giving it to them, so that a Toronto family in need can now enjoy a beautiful piece of furniture, possibly for generations to come, fills my heart and puts my mind at rest: it was the right thing to do. 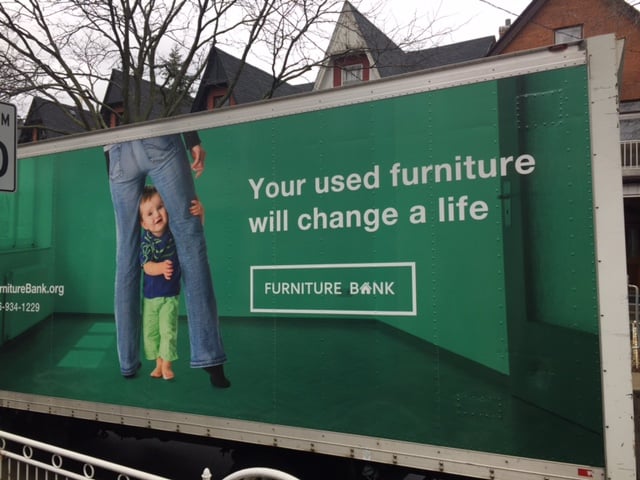 So last Saturday, we awaited the moving truck with excitement. I say excitement because when your two-and-a half year old gets his kicks watching the garbage truck roll down the street, it’s a really big deal to have a moving truck show pull up to your front door.

Upon arrival, my little guy and I showed the movers where the dresser was located and watched as they took it apart and carried it through the narrow hallway, and then down the steep stairs. My boy was transfixed, and I was amused watching his acute observance of the situation. I even let him stand inside the truck. I think the look on his face below captures the moment well: pleased as punch. 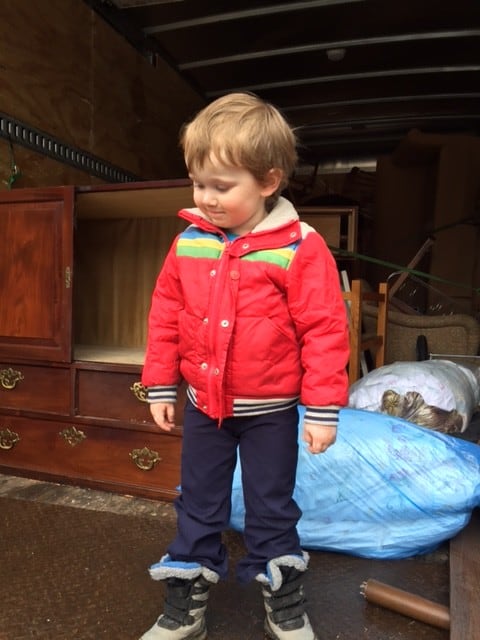 Tucking into my son’s bedroom to make way for the movers, my eye caught a glimpse of Nana’s old chair, or the one I used nightly to nurse my son for the first two years of his life. It isn’t in the best shape, with faded fabric, and to make it less sore on the eyes, I had draped it in blankets from West Elm, but it was her chair. It may have even been the chair she died in. 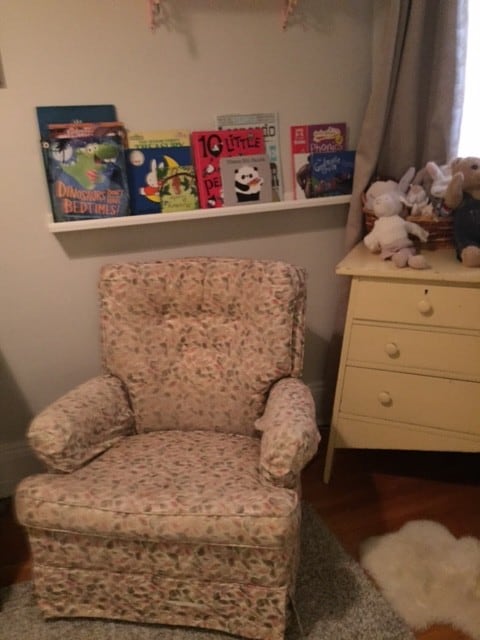 Looking at it for that brief moment, I was brought back to the night I received a call from her caregiver that she had suffered a heart attack. I raced up to her apartment, but she was already dead, lying on the floor, my mother by her side. I held her hand, it was still warm. I was about five weeks pregnant at the time. I wish I could have told her before she passed. I’d like to think she’d be happy knowing that her favourite chair played an important role in the first two years of her grandson’s life, and in my new life as a mother. Rocking him at night, I’d often think of her, her smell, the cookies she enjoyed, her squinty-eyed smile.

“How about we see if the movers can take Nana’s old chair too?” I suggested to my boy.

So with that, we said farewell to two important pieces of our lives, to free up space for new things to use and love. 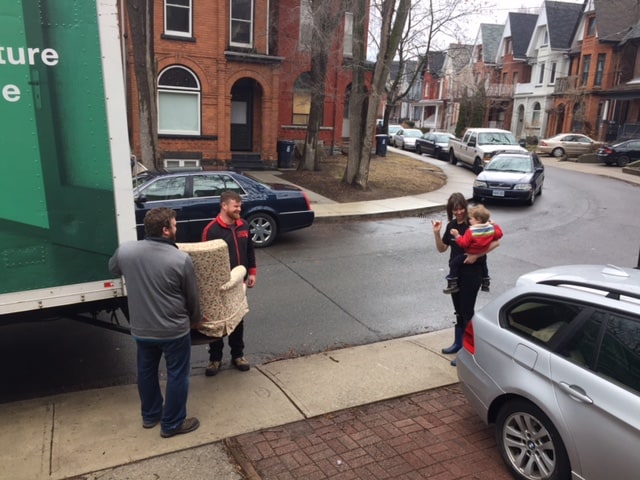 Donating those pieces to Furniture Bank not only made the process easy, but it also felt really good. With twenty-five families visiting Furniture Bank daily, I knew the pieces would be quickly re-homed.

Next week, I’ll share my experience visiting Furniture Bank. I didn’t anticipate breaking this story into two parts, but I also hadn’t sat down to give proper thought to the way stuff we own can hold us, move us. Heavy to lift, they also held an emotional weight that I hadn’t properly contemplated. These weren’t just things; they were multigenerational pieces that held our family together through divorce, death, birth and transcontinental shifts.