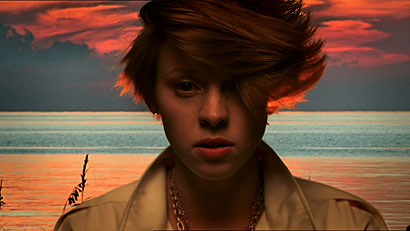 There’s a lot to take notice of the first time you meet Elly Jackson-lounging on a banquette at the Drake Hotel, her smudged white trainers kicked up in front of her, eyes thoughtful under a shock of blonde hair that’s standing straight on end, she’s saying hello through a mouth smeared with gold lipstick, and has a very serious look on her face, despite her casual demenour. One of half of UK electro-pop duo La Roux, she’s kicking back very casually for someone who’s about to become the new Crystal Castles- and she talks as good as she sings (which is very.)

“You know what I fucking love?” Elly asks. “There’s some wallpaper out there, at the end of the corridor, and it looks like really elaborate pink and white flowers, and you go up close and it’s all made of flamingos. That’s fucking cool. I have a slight obsession with flamingos at the moment. I’m about to get a flamingo tattoo on my wrist.” It’s clear from both her music and personal style that Elly takes inspiration from the random acts of awesome you only notice if you’re looking for them. When asked to compare her band to a living thing, her response is equally intriguing: “You know like one of those glow-in-the-dark, weird jellyfish things at the bottom of the ocean? A cross between that and a giraffe.”

Compared more often to their eighties influences then undersea creatures, Elly is careful to distinguish that there’s more to La Roux’s sound then a penchant for the decade of excess: “We don’t want to hang on 80s too much. We don’t want to be like ’80s revival!’ [Our sound] is just all the music we love, hopefully, with a modern twist.”

Creating that music comes from a synergetic relationship with bandmate Ben Langmaid. “Me and Ben have a lot of fun when we work together. We’re like best friends. We’re very close, and we’re very similar. We both have a stupid, silly sense of humour. In the studio, we’re cussing eachother, hitting eachother, having a laugh, eating nice food, jamming on keyboards and generally just talking about sounds. It’s really fun.”

Elly’s passion for talking about sounds-whether they’re the ones she and Ben craft together in the studio, or the songs and artists that move her, is evident. She laments the overload that has enveloped musical culture, a culture where, she says, “unfortunately, things get rinsed so quickly now you get bored of them,” but that doesn’t stop her from possessing a child-like reverence for the power of music. Speaking of a Prince show she saw last year, she says: “It was immense. I was speechless. I cried of happiness twice.”

Serenading in her spot-on pitch, she runs through a list of songs she can’t live without.”I like stuff that makes you feel almost uncomfortably intense. Uncomfortably touched…something that you relate to so much that it’s almost hard too listen to sometimes. You know when you flip through your iPod, and there’s a song that is like an amazing song, that’s so intense and emotional, like ‘You’ve Got the Love,'” she says, and sings the chorus… “songs like that. Songs by Joy Division and Tears for Fears and stuff…stuff that you love so much but you can only listen to about twice a year because it actually brings up too much emotion and it’ll just ruin your whole day.”

That’s La Roux’s strength-emotionally affecting lyrics tied around a dance-floor rhythm, crafting perfect pop anthems for the electric generation. La Roux is having a great time right now-riding the success of their single, Quicksand, and generating buzz from Shepard’s Bush to Brooklyn. But if they had to be anywhere but here? “I don’t want to say it, because I keep trying not to put too much emphasis on the ’80’s, but I so would just go back to the 80’s. I’d go and live in a Duran Duran video or something.”

How cool is that?

A thank you letter to Shedoesthecity's Managing Editor, Haley Cullingham, and summary of our adventures since 2008