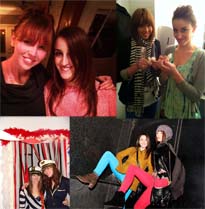 A thank you letter to Shedoesthecity's Managing Editor, Haley Cullingham, and summary of our adventures since 2008

Haley Cullingham is moving on to take on a wonderful position as Associate Editor at Masionneuve Magazine in Montreal. We’re all excited about her new chapter and I’m delighted to report that she will continue to work part-time for Shedoesthecity, with the priority of growing our Quebec readership. Although she will still play an important role with the site, I’d like to take this opportunity to share just how invaluable Haley’s work has been in the growth of Shedoesthecity over the past few years.

In the spring of 2008, Shedoesthecity was in its infancy. I received an email from a young girl who was moving back from Vancouver; she had spent three years as an undergraduate at UBC and was switching programs to attend Ryerson’s School of Journalism. She wanted to intern with us while pursuing her degree. I wish I still had that email, as there was something about it, perhaps a definitive tone of sincerity, that stuck out from the rest.  Ater a few exchanges I agreed to Haley’s proposal and in April that year, the doorbell rang.

At that juncture in time, the Shedoestheity work environment was more chaotic than usual. I had a pomeranian puppy, Rocky, that would not stop defecating on the living room floor, my desk was cluttered with Advil, coffee cups and the odd beer bottle: debris from late night partying mixed with an assortment of desperate hangover cures.

Stumbling over the dog gate, I led Haley up the creaky stairs, into a tiny office that might as well have been a closet. “This is where we work and this is Olga.” (Olga was instrumental in our initial launch into the Toronto media scene and still contributes regularly.) Olga looked up from her computer and gave Haley a friendly hello.

“There is no room for you in here…so I’ve made a desk area in the pink room.” I led Haley to a room a few feet away. It was decorated with spooky dolls collected from garage sales, a heap of neon laundry sat in the corner and a wall of photos documented parties I’d attended or hosted between 1998 and 2005. Some of the images displayed naked people tangled in wires, others of girls dressed in school girl uniforms provocatively crawling over one another. Mannequin body parts – clad in my lingerie – hung from the wall. (Still do.) Her desk lamp was a chipped poodle with a 20w bulb that barely cast a shadow.

“Welcome to Shedoesthecity. The bathroom is to your left…but I need to go grab some toilet paper from the convenience store.” Most people would have run.

Since that day, a lot has happened. Shedoesthecity extended our reach to include Montreal and Vancouver, we began a wedding blog (short lived) and last year we launched ShedoesthecityTEEN, which has afforded both of us lovely tea dates with ambitious high school students throughout the GTA.

Over the years, we have worked with approximately one hundred writers: some who have been contributing since the site launch and others who have drifted in for a month, passionate about some story they want to share, and then disappeared. All of whom, however, make up the powerful Shedoesthecity network: a group of vibrant, funny, clever young women who hail from as far as Yellowknife. Haley was key in building and fostering these relationships.

As her responsibilities grew so did her opportunities to interview some pretty big names including La Roux, Sara Polley, Elizabeth May, Detmar Blow, Margaret Atwood, Passion Pit (the entire band from the backseat of a truck in Texas,) and Alexis Krauss from Sleigh Bells.

Haley helped organize our annual Back to School Go-To Girls feature, wherein we wrangle up leaders from various universities across Canada and have them impart campus wisdom to anxious frosh. As time progressed, she became vital in the day-to-day operations and would juggle revisions on editorial content with her own writing and, of course, all the bullshit web crap formatting stuff that is time consuming and frustrating.

Over time, I learned what she loved and it seemed obvious to me that Haley’s passions of road-tripping and music festivals would only enhance our editorial. Lollapalooza, Sasquatch, Osheaga, Coachella, Bonaroo: she hit them all! Sometimes in her car but often on a Greyhound. Her adventures were documented with photo essays and personal anecdotes that included everything from sleeping in a cold car to sunrise, with thousands, in the Columbia River Gorge.

Speaking of road trips, we’ve had a few of our own, including that time where I drove a 16ft truck on an ’emergency’ trip to pick up furniture in Manhattan for the Toronto Interior Design Show. (My ex owned the furniture store, Ministry of the Interior.) Haley helped me reverse that truck through NYC’s Chinatown and navigated us to an industrial park in Brooklyn, where a man relieved himself on our vehicle while I was pulled over trying to sort out a web server crisis on the phone. I remember her tapping me on the shoulder, “Jen, there’s a man peeing on the truck.”

As if driving in a 16foot truck wasn’t enough of an ordeal, on the way back home we ended up being interrogated at the US border until 2am. Poor Haley was sleeping in the customs office while I was furiously trying to track down international paperwork. Trying to arrange faxes at 2am from US customs: Not fun. Oh, and while pulled over at a gas station, I was quite convinced that our truck was leaking fumes. Haley watched as I asked various men (who seemed like they knew about mechanics) to sniff the car and confirm whether my fears of being poisoned by a Budget rent-a-truck were justified. They were not.

If you’ve been reading us long enough, you might recall that PR crisis in 2010 wherein I foolishly called Kelly Cutrone “a witch” on Twitter. Do you know what it’s like to have Kelly Cutrone furious with you? Not only was I contending with angry messages direct from Cutrone but it seemed like half the city was lambasting me online. My careless tweet made headlines in TorontoLife.com and the National Post. Haley quickly helped me craft a public apology, published same day, and we managed to flip that PR disaster into a win. (Numbers shot up.) Sometimes you have to learn the hard way.

Aside from being the best furniture mover/PR crisis manager/managing editor, Haley grew to become a best friend. She was there when I decided to stop drinking. She was there when the sad day came when my ex-husband, Jason and I, decided to shut down the business he had worked so hard on. She even wrote about it. She was in the front row when I received my one year medallion. She was the friend who, most definitely, saw the most tears when I went through the pains of separation and divorce. For awhile, I had to relocate Shedoesthecity headquarters to the Starbucks in Rosedale (Coffee expenses that month tripled and I ate way too many muffins,) but we pushed on. Haley was always there.

It wasn’t always easy, balancing her hectic schedule at Ryerson with Shedoesthecity. There were a couple months when she took a leave of absence so that she could dedicate time to The Ryerson Review of Journalism, where she held the prestigious and demanding role as Editor. Wonky routine aside, we made it work.

Running a small business from one’s home means that as much as you try to keep things separate, personal life inevitably bleeds into work relationships. Haley got intertwined into every facet of my life, real deep. I have many sources of support, including my dear family and dozens of amazing close friends, but as I look back over the past four and a half years it has become abundantly clear that throughout the chaos, Haley was the one who was by my side most as I endured the storm within these walls. For me, she was the daily sunlight that arrived on my stoop every day and allowed me to refocus my attention from pain and heartache to my pride and joy; a little site called Shedoesthecity.

Please join me in congratulating her on this new exciting chapter and thanking her for a job well done. But yeah…our journey is far from being over.

Oh, what fun we’ve had. We will all miss you, Haley.
(Click to Enlarge)