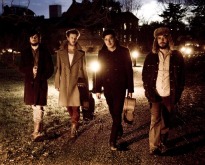 Their North American tour sold out instantly, despite the fact that only one song had landed on American radio. Singers, musicians, poets: their identifying titles are simultaneously multiple and meaningless, because when they perform live, you’ll forget your own name.

Mumford and Sons visited Montreal this month, bringing a tornado of talent, gusto and good hair to Le National’s main stage. A band composed of Marcus Mumford, Country Winston, Ben Lovett and Ted Dwane, this West London quartet have been subtly climbing the ladder of fame, garnering fans in all corners of the globe and selling out huge venues for the last two years. With King Charles and Cadillac Sky at their side – for the Montreal neck of the tour, anyway – Mumford and Sons played with refreshing and palpable determination.

Marcus’ vocals truly dig deep: with certain songs inspired by the works of Shakespeare (including the title of their debut album ‘Sigh No More’), instruments seem like a mere and lovely after-thought to the beautifully-written and poetry-esque lyrics. With audible British accents underscoring everything line, these boys gently pull each song out of the air, one at a time, for an audience that quite literally chanted each and every word.

With several successful attempts at addressing the audience in French (Ben oui! Vous êtes au Québec, mes hommes), boyish smiles and humorous on-stage conversation, the strong camaraderie between the band members definitely granted the performance a higher degree of intimacy. Acoustic and instrumental pieces were unique and at times improvisational, and both opening acts joined Mumford and Sons on stage for an epic and unforgettable finale. Violins, drums, guitars and beards (ahem, Cadillac Sky) were flying – there was no shortage of joy on stage, which ultimately translated into a mass of happy, sweaty fans, trying to rigorously deny the fact that good things must always come to an end.

Overall, Mumford and Sons’ appeal rests in their humbleness. They are highly talented, good-looking, polite and well-dressed musicians: Gentlemen of the Road, truly.