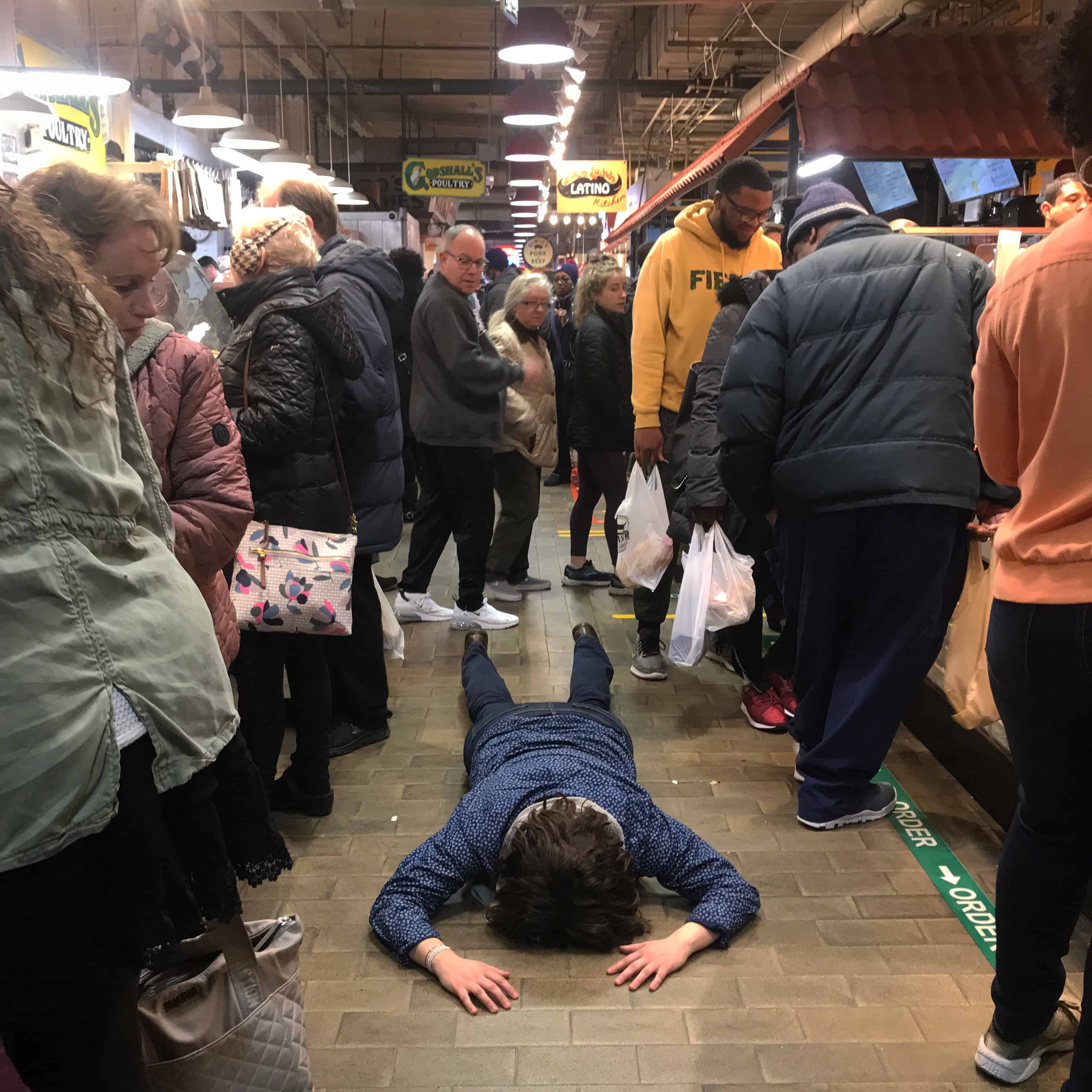 Devastation Portraits is a series of performative images by Philadelphia artist Alison Crouse, wherein she deliberately collapses facedown in public spaces. Part of the Rendezvous With Madness group exhibit “Making Mad” (October 10-20, Toronto Centre for Media Arts), these overt re-enactments give visibility to the often invisible weight of anxiety and depression and challenge societal norms of what is considered “appropriate” emotional expression.

The bold and disruptive physical performance, often staged in high-density subway platforms, boardwalks, markets, and music festivals, startles passersby, causing sudden and strong emotional reactions. Just like when spectators are viewing images in a gallery, their response allows for a pause, and time to slowly ask questions. This is a fascinating, uncomfortable series that explores mental health and our response to it, as individuals and society as a whole.

We connected with Alison to find out how this daring and deeply personal project began, and what the response has been like.

SDTC: What was it that originally inspired this series?

AC: I have a long and complicated relationship with emotional stability. In October of 2018, trapped in my brain and exhausted, I knew I needed to connect with the world again. I couldn’t think my way to a solution, however. My head was static. The idea for my series came to me first on a visceral level, and I decided that I would force, dare and trick myself into externalizing my deepest emotions. I would photograph performances and turn them into a digital archive, giving them new weight but less power over me. It was a project that stemmed from necessity, and it’s ironic that despite being an artist, I couldn’t have anticipated the role it would play in restoring my health.

How did it feel when you first began to stage these performances? Where was the first one staged?

The first few Devastation Portraits were actually done on 16mm film, when I took a long weekend outside of the city to collect my thoughts and explore some ideas. Using a self-timer, I jumped into the 30-second shots staged on the beach, in a hotel room, and in my car. It was only later, when the project was more fully conceived, that I began performing in public spaces that included people. It had become clear to me that my interest lay not so much in the documentation of my own personal despair, but in a broader tension between our private emotions and the public spaces we navigate on a daily basis. In the beginning I felt a bit timid and exposed, but as time went on, I realized that the performances were actually bringing me out of myself and connecting me to my environment.

What are the more memorable reactions you’ve received since you first began this project?

One dreary mid-winter day I was getting ready to create a portrait when I saw a woman with a small child in a carriage. The baby was crying, and the woman told her to shut up and sit down. It broke my heart. As I lowered myself to the cold sidewalk, the performative element evaporated, and I experienced a genuine sadness at the moment I had just witnessed. The woman, having then crossed the street, was startled to see me and asked if I was okay. I think I jumped up and laughed it off, but I remember feeling a disconnect between her gentle show of concern for me and the harsh words I had just heard. I am not in a position to be judgmental of anyone, but I think it’s important to observe how early we are being told to stifle our expressions of sadness or distress.

What are you trying to get people to think about? What conversations do you imagine are sparked from the Devastation Portraits?

When I began this series, I was very conscious in my choice to lay flat with my face downwards. I hoped it was dramatic, maybe even absurd, and that it would provoke conversations about vulnerability and humanity. This manifested once in an exchange between two young women who said, “I totally get it. Sometimes I just want to fall out like that.” More often than not, however, I hear people commenting on germs or filth, and I have to wonder if that’s a way to avoid the real question of what would bring someone to be on the ground that way.

When I look at your work, it makes me think of people who are often lying face down in bus stations, or on busy city blocks. Your work is described as exploring the “often invisible weight of anxiety and depression,” but I wonder if you are also commenting on homelessness?

My intention with this project has always been to focus on invisibility within the public sphere. While I am particularly interested in the stigma of mental health, homelessness and other forms of vulnerability certainly fall under that umbrella. In fact, as I was driving onto the interstate ramp the other day, I saw a man lying face down on the sidewalk. Pedestrians were walking by, and stuck as I was in highway traffic, I couldn’t get to him. I felt as though I was watching my own Devastation Portrait playing out. It made me think that as resilient as I believe we all have the potential to be, we are also all susceptible to struggle. These portraits are about the feeling of isolation that often comes from those challenges, regardless of what they are rooted in.

Do people ever offer assistance? As in, do they come over and ask if you need help?

The times that people have offered assistance are memorable because they are rare. The majority of my performances, even if they draw attention, do not elicit a response. Whether this is the result of discomfort, or whether people are simply unfazed, I am not sure. On the occasions when people do approach, I use their expression of relief as an opportunity to explain what I am doing, and to hopefully raise some awareness.

What do you consider to be the biggest lesson(s) you’ve learned since embarking on this series?

One of the most important things I have learned from working on this series is how the performance of devastation can pull me out from the actual experience of it. The dedication to making pictures multiple times a week, to posting them, and to maintaining a website, have all forced me out of fruitless rumination and into a process of making. It is the process, not the end result, that has been the most beneficial.

Where was the most uncomfortable location that you ever performed in? Why?

I choose my locations based primarily on my daily routines and travels. In other words, the images are staged, but they are not usually pre-planned. This has led to some interesting locations, and those environments have not always been comfortable, for a variety of reasons. Devastation Portrait no. 142 was performed in the Philadelphia Museum of Art. I remember hovering for some time, getting up the nerve to drop quickly to the ground for fear of “getting in trouble” with the security guards. It was a sort of societal concern that I was feeling.

On the other hand, Devastation Portrait no. 77 was performed at a gas station at night, and while I had told the person next to me what I was doing, not everyone was aware. It was only after the fact, when I heard the commotion, that the time of day combined with the specific location of the gas station should probably have caused more thought on my part. In general, however, I have found that I am much bolder than I used to be, and that I shed some of my personal shyness when I see an opportunity.

Making Mad exhibit is part of this year’s Rendezvous With Madness Festival. Alison Crouse’s work will be displayed alongside the work of artists Peter Dillman, Esmond Lee, Ben McCarthy & SpekWork, Sarah Trad and Véronique Vallières. Opening reception will be held on Thursday, October 10, 7-11 p.m., and on Saturday, October 12, 1-3 p.m., there will be an artist talk/panel with curator Claudette Abrams, where guests will be invited to join the conversation, and #GetMad. FREE.