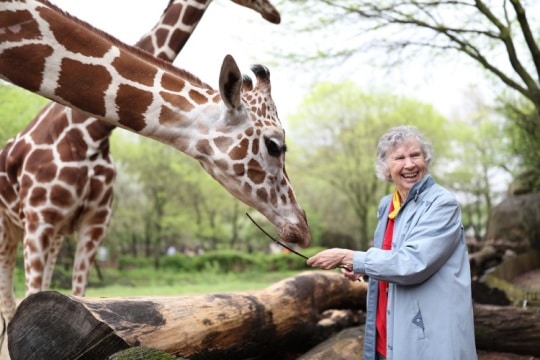 The Woman Who Loves Giraffes: The Inspirational Journey of Dr. Anne Innis Dagg

Years before Jane Goodall set out to study chimps, twenty-three-year-old Dr. Anne Innis Dagg was studying giraffes in their natural habitat. A new documentary from Alison Reid retraces Dr. Dagg’s path to follow her dream, and the significant obstacles she faced as a woman in male-dominated academia.

In The Woman Who Loves Giraffes, we get an intimate account of Dr. Dagg’s life as a young woman, juxtaposed with a first-hand look at the devastating reality that giraffes are facing today, and the forces that bring her back at a time when the giraffe world needs her most.

We spoke with Alison Reid this week. 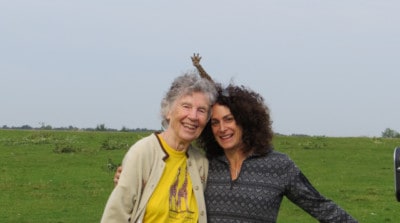 SDTC: What was your first introduction to Dr. Anne Dagg?

AR: I first heard about her story on CBC radio. They did a piece called Wild Journey. I was just captivated by it. I immediately went out and read Dr. Dagg’s book, Pursuing Giraffe. I thought it would make a great film. I spoke to her and she was kind enough to give me the rights to her book. My initial intention was to make a scripted film about her, but when I found out she was going back to Africa for the first time in over half a century, I thought it was historic and should be recorded. I scrambled and got a little crew together and we went with her to Africa.

Dr. Dagg ran up against significant barriers, especially in being refused tenure from the University of Guelph due to her being a woman. The 1970s weren’t that long ago. Were you surprised that that’s what the situation was like for women in academia back then?

It really wasn’t; it was like yesterday. Certainly, I was aware of this. It’s been written and talked about. Its very timely. It seems like now is the time where it’s a tipping point. It feels like we’re making much bigger strides in some regards; in other regards, we’re going backwards.

Were you surprised that the University of Guelph issued her an apology?

The action that the university of Guelph took was pretty remarkable. They acknowledged what went on back in the 1970s. Not only did they issue an apology, but they made a scholarship in her name; the Dr. Anne Innis Dagg Summer Research Scholarship for female undergraduate students majoring in either Zoology or Biodiversity.

What was her reaction to the apology?

That wound was a very deep wound, and it doesn’t completely go away. She wrote to the current Dean of Biology a beautiful email that said something along the lines of, “I never thought I’d feel comfortable in the halls of Guelph, the university that meant so much to me. I was so hurt by what happened. When I went there and had such a positive response from the students and the faculty and you, I did feel comfortable again.” So it was significant for her. 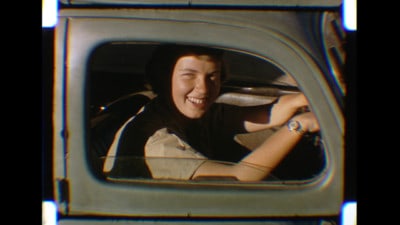 I enjoyed the portion at the end where it shows her at the Women’s March.

To me, that did sort of encapsulate everything that was important to Anne. It brought together not only the conservation issue but climate change, feminism, equality. I wanted to go out on a positive note. Anne said she used to feel alone, like she was the only one. Or there were very few women and people fighting for equality for women back in the day. She said it was so powerful for her to be surrounded by all these like-minded men and women; it bolstered her. If we have this groundswell of like-minded people, we can change things. 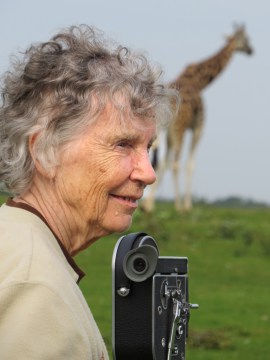 What about giraffes did you find particularly fascinating?

They have a fifteen-month-long gestation period. It takes a long time, so when a baby is born, it is a big deal. So many of the newborns in the wild are very vulnerable when they’re first born, so the mothers go into hiding when they have their calves. The babies are on their feet within an hour of being born, because they need to be able to survive.

The social structure is interesting. The mothers and daughters stay together when they travel in groups. The males stay solo and interact with females when the urge strikes them. They’ve got the largest heart of any land mammal, with this incredible blood pressure control system that is actually the basis of the science that they use to keep astronauts from losing consciousness in space. They have very dense arteries and veins that allow them to keep their blood pressure constant.

When you experience them in the wild, it’s very powerful. They’re such magnificent creatures and they’ve survived for so long.

What was the biggest challenge you faced in making the film?

It was to sift through the hundreds of hours of footage I collected and find a way to construct the story in a compelling way. I always wanted to weave through Anne’s past and present stories—juxtaposing them—and use the letters and archival footage to do that. I had an embarrassment of riches available to work with; there are so many fascinating parts to Anne’s story, so many amazing letters, and I had to figure out what to leave out. That was tough.

What has Dr. Dagg taught you about life?

She’s got a funny combination of being gentle, yet tenacious. She forges ahead no matter what. She’s driven to find the yes. If there’s something she wants to do, she just ploughs forward and does it. She’s very passionate about following her dreams. And she’s always gotta be moving and doing something; she just finished a biography about her mother and she’s eighty-six years old. Practically every day, she asks, “When are we going back to Africa?” She’s very keen to see how the money donated to the giraffe conservation agency that she supports is making a difference.

That they can follow their dreams. That you can dream whatever you want to dream and go after it and not let anyone stop you. Also, we have to take care of this planet. This film is about the first person to study this incredible creature, and they could be at the end of their existence. It’s a tipping point, and we’ve all got to change the way we’re living for this planet to survive. Anne’s a vegetarian. I think that’s one of the most important things we can do; not eat the amount of meat that we eat. Unless we really buck up and do something, we’re losing this planet.

The Crave Original Documentary The Woman Who Loves Giraffes begins streaming on International Women’s Day, Friday, March 8, before its world television premiere on Crave that evening at 7:30 p.m. ET.