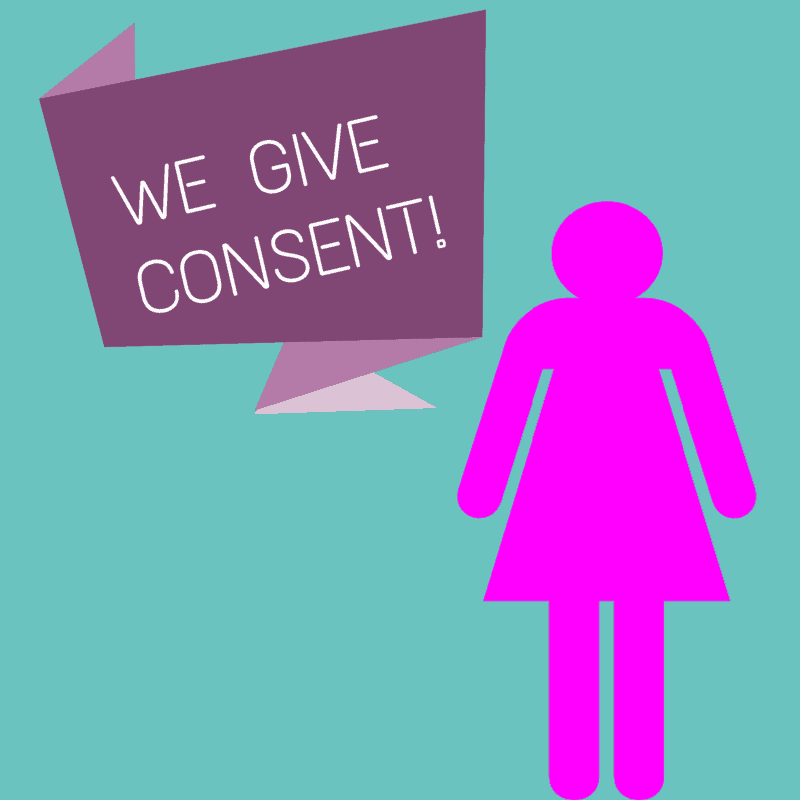 WE GIVE CONSENT: Interview with Tessa Hill and Lia Valente

Tessa Hill and Lia Valente are two 8th grade feminists who are making waves and taking names with their project We Give Consent, which strives to get the topic of consent included in the Ontario Health curriculum. These unstoppable tween women’s rights activists are also making a short documentary about Rape Culture in the media and garnering the attention of feminists across the country with their far-beyond-their-years brilliance, poignancy, and Beyoncé-level powerfulness.

Jess Beaulieu spoke to Tessa and Lia to find out more about their campaign, what inspires them, and what changes they want to see in 2015.

Jess Beaulieu: When did you begin to identify as feminists?

Tessa Hill: I don’t know if there was really a certain point when I started calling myself a feminist, but it was probably around the beginning of grade 7 when I started learning more about sexism and the issues facing women. I think I’ve always been a feminist, whether or not I have called myself one. I always knew the way boys at my school talked about girls
was wrong and that the stereotypes of women were untrue. I was definitely always the one girl to stand up to sexist comments at school and talk about gender equality.

Lia Valente: Like Tessa, I started becoming more educated and passionate about feminism when I started learning about it at school in grade 7, but it’s been an issue I’ve cared about my whole life. My parents and older sister have been teaching me about it for practically my whole life, so I guess I’ve always been a feminist.

JB: What does feminism mean to you?

TH: Feminism, to me, means believing in gender equality but also being a strong woman. I don’t think feminism is limited to women, but calling myself a feminist connects with being an activist and fighting for women’s rights.

JB: When did you get the idea for We Give Consent and what inspired you to take on this issue?

TH: The idea for We Give Consent started from a Media studies project. We’re creating a 20-minute documentary about Rape Culture in the media. Through our interviews, with people like Farrah Khan and Steph Guthrie, we kept hearing the phrase “Consent Culture” and “to end rape culture we have to create a consent culture.”  A part of our project is called a ‘Call to Action’, where you do something that will help change the issue you are talking about. So, one day in a Queer Straight Alliance meeting at our school our teacher brought up the fact that the Ontario Health curriculum was changing. Right now the health curriculum doesn’t include anything about affirmative consent, and this started a conversation with our teacher about what we could do. Lia and I decided on creating We Give Consent.

TH: It was definitely nothing but supportive. We weren’t dismissed because we were young or hated on by anyone around us, and on Twitter starting out there were only great responses. Once it began to pick up speed there were one or two weird tweets, but mainly just awesome support from awesome people!

JB: How do you feel about Kathleen Wynne recently deciding to rework Ontario’s new sex-education curriculum to include the issue of consent? I assume you’re thrilled!

TH: Yes! So very excited! I honestly don’t think it’s hit me yet, because Lia and I have both had an incredibly tiring week. It makes me so happy that it’s finally happening. I think about all of the behavior in schools and the sexist environments where I grew up, and how that is all going to change because of the curriculum adding consent. We’re both so excited to finally get taught proper sex ed, it’s about time!

JB: What are your impressions on the current climate around relationships in your age group?

LV: As middle school students, relationships and dating are definitely something we talk about amongst our friends. I think that in many ways, Tessa and I are lucky that we go to a social justice school where everyone is very accepting of people’s sexual orientations and sexuality, but at the same time, a lot of kids and young people’s ideas of relationships are morphed due to the media and lack of sex education. For example, boys our age are often pressured to ask people (mostly girls) out and “make the first move” in relationships, and a lot of the time, are shamed if they don’t (which I think is completely ridiculous). However, girls are taught to wait patiently for boys to ask them out; honestly, I think it’s completely stupid. Even though kids and teens our age aren’t necessarily sexually active, everyone needs to be taught about healthy relationships regardless of age.

JB: Do you find social media helpful in the fight against sexism?

TH: I think social media can be really great and really terrible in the fight against sexism. On one hand, it can really open up the conversation about sexual violence and gender equality to people who may not have the same knowledge. On the other hand, it is an incredibly easy place for people to spew hate messages and tweets, and exploit victims of sexual violence. Right now I think the good side is winning, and social media is playing a huge part in changing how we talk about sexual violence and how we handle sexism.

JB: Who are your feminist idols?

TH: So many people! To me, it’s really everyone who we’ve met and talked to so far through our doc and We Give Consent. Farrah Khan and Steph Guthrie have been so awesome in supporting us, and we admire them so much!

LV: We also admire the famous YouTuber Laci Green, who has told us everything we need to know about this issue and more. We’re also totally inspired by Beyoncé, who we both agree is super talented and amazing overall.

JB: Sometimes being an activist can be painful, scary, and just plain exhausting. What motivates you to keep fighting the good fight?

TH: Through this past week, Lia and I have really experienced what it is like and, yes, it is extremely exhausting. I think what motivates me is the idea that the world can actually change because of what I’m doing. It’s just really exciting and very very motivating.

LV: I completely agree with Tessa. Of course it’s frustrating and tiring being a thirteen-year-old that’s never done anything like this before, but we have so many great supporters that make me happy to keep going. Now that they’ve added consent into the curriculum, it’s all kind of rewarding and I just need to remember that we’re doing great things and it’s all worth it.

JB: What do you do when you’re not being powerful agents of change?

TH: Well, I think I’m just a regular teenager. I mean I use a lot of social media (Tumblr yasss) and hang out with my friends. I also really love photography and writing. AND MUSIC.  Beyoncé, Marina and the Diamonds. Love it.

LV: When I’m not doing homework (ew) I like Tumblr and Instagram; I’m really into film, photography, and writing. I also love movies, TV shows, and music, especially Marina and The Diamonds, who is my absolute idol.

TH: Obviously the health curriculum, but also just the general conversation about feminism and queer rights. I really want to see Leelah’s Law about banning conversion therapy pass. I also hope that the conversation and understanding of LGBTQ and women’s rights won’t end and be forgotten. I hope 2015 will be the year of change.

LV: When kids and teens are being taught proper sex ed (meaning the understanding of affirmative, enthusiastic consent and acknowledging LGBTQ people) the ultimate goal will be to create a culture of consent. Our generation is being raised in a culture where rape is accepted and expected as a norm and girls and victims of sexual violence are blamed for their own assault, and that’s what needs to change.