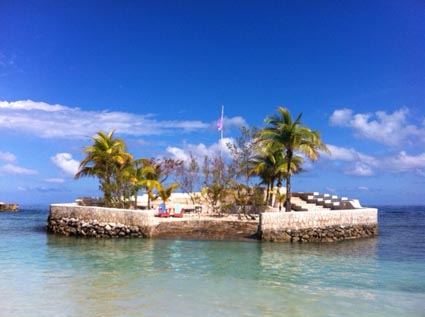 GoldenEye Resort, Jamaica is Double Oh Heaven. Here’s Why You Should Probably Spend Your Next Vacation at Ian Fleming’s Old Villa

Where does James Bond go when he needs a vacation? With all that bed-hopping and bon mot-tossing, surely an overworked exec like him craves a bit of R&R occasionally. But it would be hard to picture him at a place like Disneyland (too family-friendly) or Club Med (too conventional) or even Hedonism II (too much like work). He would probably most enjoy a place that is elegant, but low-key. And somewhere secluded, so as not to be bothered by any counter-agents still out for revenge Maybe even somewhere close to his roots?

Luckily for our beloved British spy there is GoldenEye, a heavenly, 52-acre resort and hotel located in Oracabessa Bay, on the north coast of Jamaica. This stylish but subdued resort also happens to be the former home of Bond’s creator, Ian Fleming, and to add to its cool quotient is now owned by Chris Blackwell, the founder of Island Records.

Bond Vivant A list of previous guests who have visited GoldenEye over the years reads like a who’s who of Hollywood royalty. Elizabeth Taylor, Katharine Hepburn, Errol Flynn, and, in more recent years, Johnny Depp and Kate Moss, have all stayed here. The beauty and immediate sense of calm experienced upon arrival is surely one reason for its appeal. Add to this an infinity pool with a panoramic view of the beach, the fabulous FieldSpa, an array of water activities, all coupled with a laid-back attitude, and it’s not hard to see why the beautiful people flock here in droves.

Bond Nuit The guest villas, which are all situated either on the beach or surrounding a lagoon, are spacious, minimalist and tasteful in design. Suites contain large, comfortable beds with all the modern fixin’s as well as fabulous outdoor showers. But to get a real sense of GoldenEye’s legacy, request a tour of the Ian Fleming Villa. Guests fortunate enough to stay at this mini-compound are outfitted with a media room, private beach and pool, a full-time kitchen staff, and a butler (a butler). The main house, an artfully-restored bungalow, is where Fleming resided in the 50s and where he penned all fourteen of his Bond novels.

Bond AppetitThe cuisine is one of the main attractions of GoldenEye. Breakfast and Lunch are served outdoors at the property’s Bizot Bar. Dinner is also served al fresco at the resort’s slightly more formal Gazebo restaurant. Jerk dishes are featured on the lunch and dinner menus along with other local specialties, such as ackee and saltfish. As for drinks, guests can alternate between the vodka martini (shaken, not stirred) or the slightly-less-obvious GoldenEye, the house beverage made with Blackwell’s Fine Jamaican Rum and fresh pineapple and orange juices.

Bond Jovi and other mainstream rock music is not likely to be played on the sound system piped in the common areas, given Blackwell’s musical influences (Bob Marley, Jimmy Cliff, Roxy Music and Marianne Faithfull were just a few of his notable signings). You can be sure that a hip selection of tunes ranging from reggae to Barry White to Cold War Kids will be on constant rotation. (And, yes, on Day 4, I did finally hear the James Bond Theme song, albeit a modern remix).

Bond Anniversaire 2012 happens to be the 50th Anniversary of the Bond movie franchise (Dr. No being the inaugural film). Locally, TIFF is presenting a local exhibit, Designing 007: 50 Years of Bond Style commemorating this milestone, making this a banner year for Bond.

A trip to GoldenEye is definitely more expensive than your average all-inclusive beach holiday. This is likely the kind of place you’d visit if you have an extra special occasion. But c’mon, you only live once (ok, twice).