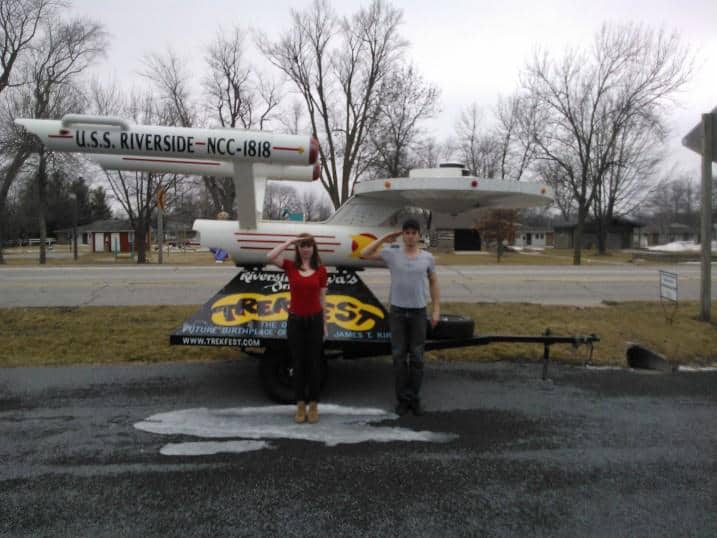 Alice is currently travelling around America in a sketch comedy show. This week, she’s in Iowa.

Riverside, Iowa, the birth place of Captain Kirk, is a dot-on-the-map of a town. Tiny and quant, with kind people, it takes under a minute to drive through.  When you enter, a small model of the Enterprise greets you, along with a museum comprised mostly of Star Trek toys from the eighties. My friend Pat ran up and down the aisle pointing at toys he’d owned, and at toys he’d always wanted.

In the centre of town is a tombstone, commemorating that Kirk will be born here someday. Next to a pool table in the bar is a plaque noting that here is where he’ll be conceived.  Riverside, future birthplace of Captain James Tiberius Kirk: after spending a week in Iowa, that notion wasn’t hard to believe.

It’s a place where you have to get creative making your own fun.  We rose to the challenge, scheduling rubber duck races, buying cheap dye to switch hair colours*, and, of course, drinking.

It seems natural that a swashbuckling, roguish captain would be bred here.  In the latest Star Trek movie, a young Kirk steals a car and drives it off a cliff, nearly killing himself in the process.  Two days in Iowa, and I guarantee that’ll sound like a really fun time.  I arrived in Des Moines after the rest of the cast and crew, and upon arrival, Jesse informed me had already done everything there was to do in Iowa.  Skeptical, I made him list off what he’d done.

He had done everything there is to do is Des Moines, Iowa.

BJ Don’t Be a Hero

“I think I’m just going to have a salad,” I muttered, glancing over the heart attack-inducing menu.  Zombie Burger had been the thing to do in Des Moines, as it was the only thing suggested by people we’d asked.  It did not disappoint – the menu is loaded with burger choices, most of which had caloric intakes so high that they straddle the line of the “right-to-die” debate.  Not wanting to break my diet or euthanize myself, I settled on a salad.  BJ, however, does not fear the reaper; he ordered “The Walking Ched.”  We joke about American food in Canada – its likelihood to be deep-fried, served on Krispy Cremes or waffles, its portions.  We all shook our collective heads at Tim Hortons Americanizing their cup sizes and to this day when I forget and order a medium, I stare down at my behemoth of a French vanilla and harshly reflect on my life and choices.  The Walking Ched makes that French vanilla and any joke about American food sound like foolish child’s play: Bacon, cheddar cheese, onions, caramelized onions, cheese bun, mayo, and mac n’ cheese, served on a burger, served in between two breaded and deep-fried piles of Mac and Cheese.

My salad and its dried cranberries quaked in the presences of this first-world tribute to hedonism and heart disease.  We took a moment to marvel and photograph, as if it was the Arc de Triomph or the statue of David.  As classic works of arts herald the epitome of the works of Renaissance man, this burger touted the success of modern-day Des Moines.  Then, we ate.  As BJ sat, with his face close to the plate to attempt to eat the burger, a waiter walked by and said, “Oh my god.  You’re eating it without a knife and fork?  Wow.”

*With varying results, ranging from barely darker to horrible, cataclysmic disaster.  More on that next week.