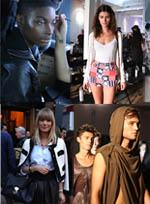 Prior to the waiting and waiting and what-the-FUCK waiting, we snooped around backstage to watch as models got their MAC make-up done and hair spritzed and straightened just so. From the quick conversations we had, we extracted that the look and feel of the show was “androgynous… moneyed… vacation… poolside…. Norweigian…. luxurious.” Now you know how to work it come April.

As for hair, L’Oreal’s Colin Ford cut to the chase, “It’s like you are on holiday, you are at the pool and your hair is dry, it’s a little loose, a little rough.” Now, this look can not be achieved by actually emerging from a pool and sunbathing but rather with L’Oreal’s new Mythic Oil. It’s not hard to get the I-didn’t-try-hard-but-I’m-dripping-in-sex look, but you need product honey.

Oh, sorry, you want to know about the clothes? FABULOUS DARLING, simply fabulous. Truly. At first, it was models gowned, head-to-toe in bright hues, almost like paint cans had been tipped over their body and hung just perfectly off bust and hips. I can guarantee had half the crowd thinking, “Oooh, maybe for Power Ball next year.” Sophisticated and stunning, the girls walked out in all purple, pink, orange, red….like a rainbow, but I thought of freshly cut bouquets of spring tulips.

Then came the edgy. Bring on the EDGE! All gray, white and black with leather bits: Cuffs, mini jackets, armies, or jagged scraps just hanging off of jackets. It was tough, a little sadomasschistic and, our favourite fashion word, RAW. So effing raw. I have nothing bad to say about the Greta woman, loved it and wanted it all. What I didn’t love was the monk-chic man capes. Blech.

Of course, the most fun at a fashion show is always the fashion parade on display. From Value Village to $5000 glittery Balmain pants, we saw it all but without a doubt, the winner for WTF goes to stylist Tony Pham who wore, what our photog Becca Lemire described as a “Lace red cloud hat mask.” For a second, photographers in the pit thought that maybe Lady Gaga had arrived. Although we aren’t sure how he could see where he was walking, we applaud the ludicrous apparel, if only for making us ha-ha while lingering in a fashion mob.

No longer new to the scene, but still making waves and keeping everyone excited, it’s obvious that Greta Constantine has a long career ahead. And we salute them, once again, for a WOW-oh-WOW worthy show.

Contest: Win all the goodies from the Bask-It-Style Gift Lounge!