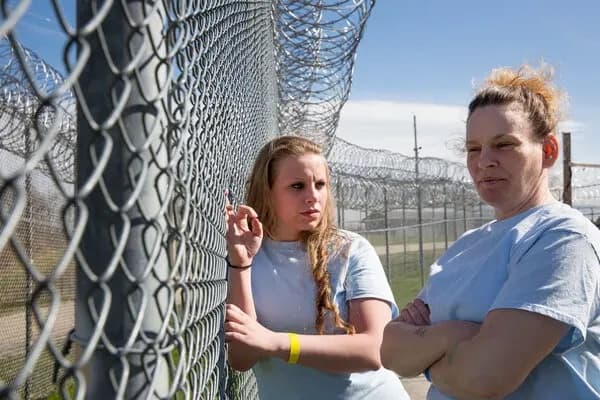 "Anyone who understands addiction knows that you can't stop someone when they want drugs."
Film

Jessica Earnshaw was working on a photo essay about people ageing in prison when she met Rosemary and Jacinta, a mother and daughter doing time at Maine Correctional Center for drug-related crime. “I was struck by their relationship… their banter, their closeness, they were like best friends,” says the director.

Jacinta was first sex trafficked, by her mother, at the age of 15, which is around the same time she began smoking crack, and also when she got pregnant. She grew up watching her mother do drugs, and followed in her footsteps. In Earnshaw’s hard-hitting documentary, Jacinta, audiences see how trauma is passed down from one generation to the next, how addiction can ravage a family, and how incarceration has become a “solution” in place of proper treatment and support.

Over the course of the film, we watch Jacinta getting released from prison and trying to maintain her sobriety, and start a new life, while also repairing her relationship with her young daughter. Her ups and downs are frustrating and devastating—it’s a familiar story for so many families.

“When addiction had her, it was like her spirit left her. There was something in her eyes that was no longer there,” says Earnshaw, who had no idea what she was in for when she first picked up the camera to start filming. “I tried to get her help, but she didn’t want it. Anyone who understands addiction knows that you can’t stop someone when they want drugs.”

For a while, Earnshaw wasn’t sure if what she was shooting would actually ever be a film. “It was intense,” she says, of the night Jacinta left the sober house, determined to get high. “She was dead set on getting heroin. I tried to get her help, but she didn’t want it. I really struggled with whether I could continue working on the project. It felt like I was witnessing a slow train wreck.”

But through it all, audiences get an intimate and honest look at what life looks like for a woman, a mother, in active addiction—including the never-ending cycle of debilitating guilt and shame, and the constant fear of being hurt and/or killed by dealers.

The film is full of poignant and heartbreaking scenes, but one that stands out is when Jacinta remarks that she’d rather be in jail for ten years, than living with addiction on the outside for ten years. “People can be incarcerated in many different forms,” says Earnshaw, who after following Jacinta around day after day, understands exactly why life on the outside was tougher. “The women that I’ve met in prison are some of the strongest and most intelligent women I’ve ever met. They’ve gone through such trauma in their childhood. If I went through that, I’d probably shoot heroin too. It’s mind-blowing to me that we incarcerate people instead of putting the money into healing. There are so many women, like Jacinta, who are completely stuck.”

Earnshaw always hoped that her doc would inspire compassion and empathy for people like Jacinta, but she’s been overwhelmed by how many people have connected to say how much they relate to the film. “People have been tapping into their own trauma, through the film,” she says.

Whether or not audiences connect with the theme of addiction or not, many will relate to the story of a parent who loves their  children fiercely, but lacks the tools and understanding of how to care for them. There’s no denying that Rosemary loves Jacinta, but her actions have robbed her daughter of so much time and potential.

Jacinta is screening at the Rendezvous With Madness Festival until November 7th. Digital screening is available to rent and PWYW (Pay What You Wish). More info here.

"Anyone who understands addiction knows that you can't stop someone when they want drugs."