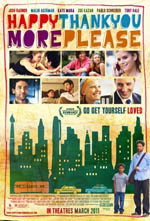 A hit at Sundance, Happythankyoumoreplease is a cute and quirky flick about a group of friends who, in their late twenties, are struggling to figure out what they want in life before settling down as organized and fulfilled adults. It’s not an easy transition, and for some, growing up never actually happens.

Written, directed and starring Josh Radnor (How I Met Your Mother) Happythankyoumoreplease seems like a diary of Radnor’s own experience growing up in NYC. The script feels sincere, which gives the movie heart and, despite one zany plot line, credibility. Radnor’s main character Annie, played by Canadian beauty Malin Ackerman, was inspired by his real life BFF, Rachel Fleit. Annie is depicted as a strong, beautiful and honest young woman whose confidence is entangled with her ongoing struggle with Alopecia, a disease that prevents hair growth. And although Fleit admits it isn’t verbatim, she does relate strongly to Annie’s story.

A recognizable figure in the New York art world and a dynamo producer who is now starting her own line of clothes, we chatted with Fleit about what it’s like to be written into a film,

why she practices gratitude and how Alopecia has shaped her identity:

Shedoesthecity: How did your life become a movie?

Rachel Fleit: My friend, my good friend, is Josh Radnor. We met in the summer of 2003 in the East Village at a party we used to throw with a bunch of theatre actors and directors, and we became fast friends. Four or five years ago, Josh told me “I really want a character of you.” The character [Annie] is inspired by me, but it’s not verbatim.What we have in common is that we both have Alopecia, I definitely identify with her struggle, but we aren’t exactly the same. The film is a love letter for our friendship. It’s moving….it’s quite an honour to have a friend make a character inspired by you.

SDTC: In the film, Annie’s Alopecia is a strong focal point. How much does this disease affect your life on a daily basis?

I lost all of my hair when I was eighteen months old, so I’ve been bald my entire life. From age four to eighteen I wore a wig, every single day. When I was eighteen, finally, I sort of had the courage to be who I was. I was, like, “I’m bald, and it’s okay.” I got a lot of strength from attending annual [Alopecia] conferences, which I’m actually on my way to next week. Eight hundred people converge, it’s in a different American city each year, and we just kind of get together and hang out. People are at varying stages of acceptance. This condition isn’t a physical illness, in no way am I sick, I just have no hair. It has a pyschologoical and emotional impact on me….I’m in a pretty good place but there are some days, as my condition is on the outside, where I have a bad Alopecia day…so I wear a turban on my head.

SDTC: How did life change once you turned thirty?

Rachel: My priorities shifted. I am a producer, I produce films, performances and in the past two years I launched a designer women’s wear collection in NYC. I’ve been working on my own projects versus solely facilitating other people’s visions. I have projects on the side that are for me, and are very fulfilling.

In terms of personal life, I lost my grandmother last year, the year before I turned thirty. She was the person who was the closest to me. To see a huge, full life come to an end, I started to really think about the important things in my own life. I’m making sure that I”m spending time with people I love, who love me, and demand a certain level of respect in all of my relationships. That changed when I turned thirty for sure. I got a new idea of what I deserve and what I’m able to do.

Rachel: I do. I meditate every morning and I definitely give thanks to the greater force out there that I believe in. Yeah, every single day. I’m well aware, on many different levels, that I’m not running this show. The greater universe is someone else’s show and I’m just here to help. That’s something that Josh and I share.

Gratitude is a foundation you should have. Life is going to be really twisty, and you are going to get curve balls, and it’s going to be scary, but you have to be grateful for what you have. And give thanks.

No wonder this woman inspired a script.