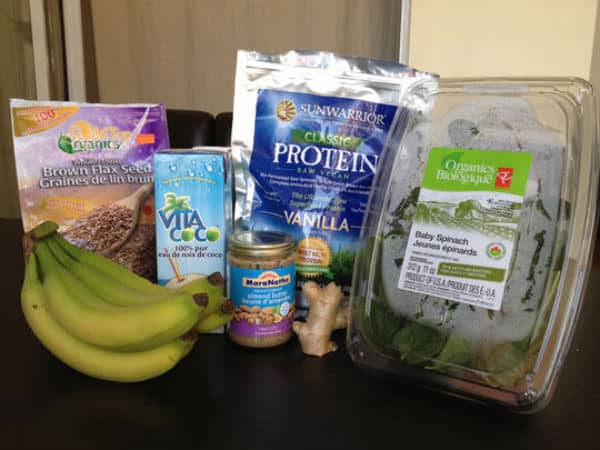 Since I began writing about nutrition, I’ve had a number of people ask me what I eat in a day.  Before I start, though, you might be surprised to hear that for the most part, I don’t actually cook during the week.  With work, school, blog writing and just life in general, I find myself insanely busy, so I usually get as much as I can ready on Sunday night.  I make a list of two to three main meals that I want to eat for the week before I go grocery shopping and then cook up a storm on Sunday evening.

I truly think meal planning is the key to healthy eating.  If you don’t meal plan, by the time you’re hungry, you’re just going to grab whatever is around (healthy or not) and most often it’s not.

So, while this isn’t always what I eat, here’s what I’ve been munching on this week:

This won’t come as a surprise, but 99% of the time, what I eat for breakfast is a smoothie.  It consists of a blender full of greens (usually spinach as the taste is best), ground flax, berries, almond milk, and protein powder.  This week I’ve been adding maca powder, a sprinkling of cinnamon, and a big wad of ginger.

This week I’ve had veggies and hummus a lot.  The veggies were a red bell pepper and a ¼ of a cucumber with some Summer Fresh spicy hummus (probably about three massive tablespoons, though I didn’t measure).  Occasionally, I make my own hummus but given that I’m so busy, the Summer Fresh is okay with me.  It’s labeled gluten free, and I can pronounce all of the ingredients on the label.

Lunches are almost always a big salad with some sort of protein.  Typically, if I have an animal protein for lunch, I have a plant-based protein for dinner, and vice versa.  I find that usually I have the animal protein at lunch as it sustains me a bit longer.

Here’s what was in the salads this week (all were organic ingredients, except for the avocado): spinach, cherry tomatoes, cucumber, a kimchi mix from Live Food Bar, avocado, broccoli and sprouted adzuki beans (which I’m VERY proud of since this is the first time I’ve made my own sprouted beans and I was always super intimidated by them, but turns out they’re EASY!).

For the salad dressing, I put Dijon mustard (sulfite-free), apple cider vinegar (unpasteurized/organic), chipotle olive oil, and a splash of tamari. Obviously most people don’t have chipotle olive oil, but you could make your own version by using cold pressed olive oil and adding some chipotle spice, or red pepper flakes, or just use regular olive oil!

By far the most important snack for me, because if I screw up on this one, it’s a 3pm crash and a downward spiral to snacking all the way until dinner. I often have an apple and a handful of almonds, or some Mary’s Crackers with almond butter.

You’re going to think I’m just saying this, but I actually frequently eat a lot of my own recipes.  This week I made zucchini pasta with my liver loving pesto recipe and I put some baked salmon on top.  For those of you without a spiralizer, you could put this with brown rice pasta or quinoa pasta (Costco has the Tru Roots brand that is by far the best GF pasta I’ve ever had).  For an even better option, you could make some spaghetti squash for the noodles.  No gadgets required, and it’s a vegetable based noodle high in vitamins!

Everyone’s bodies are a bit different, so this may not be the perfect way of eating for you, but this works well for me!

Mandy King is a Holistic Nutritionist and Gluten Free Guru who shares her expertise with She Does The City. For recipes and nutrition tips, visit her website, HEAL.

8 ways to stick to healthy eating

What happens to your digestion when you turn 30