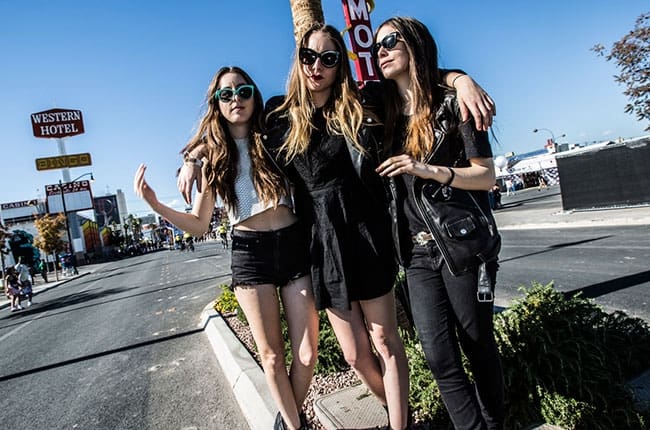 Hello, HAIM! Our fave sisters are coming to Toronto May 15th

When I have friends over to my apartment, I used to immediately ask if they’d heard of HAIM. These days it’s more yeses than nos, but whatever the answer, whatever their level of popularity at the time, we’d always spend the next forty-five minutes swinging our bodies around to HAIM’s album, with my friend saying “oh man this is really good!” and me going “I knooowww right!?” Before proceeding with the rest of this article, we need to clear up that HAIM is pronounced “hime”, as in, HAIM rhymes with time. Just FYI! Now that that’s out of my way, I can fill you in on why they are hands down my favorite band of the moment.

Their music is entertaining, innovative, and just plain addictive. Their play count on my iTunes is almost embarrassing. They often get compared to Fleetwood Mac and Stevie Nicks, which is true in the sense of the softness in their rock grooves, and the hints of folk which are most obvious in their three-part harmonies. Other influences are easier to detect, like TLC and Destiny’s Child RnB that the girls grew up listening to in the 90’s. Overall, they play smooth and dreamy Los Angeles rock, with waves of synths, and a swagger-inducing grooviness.

Their backstory is full of surprises. It’s cool enough that they are three incredibly talented sisters, but they’re so much more than just a sibling girl-band. Each one of them can play multiple instruments, and by play, I mean shred to absolute pieces. After graduating high school, lead-singer Danielle was recruited to drum for the opening act on Jenny Lewis’ tour. Following that, she got asked to stick around and play guitar for Jenny Lewis herself! How insane is that! The list goes on: Julian Casablancas, the lead-singer of The Strokes, saw a show from that Jenny Lewis tour, and then asked Danielle to contribute her guitar and percussion skills to his solo tour. When that was over, she became the guitarist for Cee-lo Green’s all-female backing band. After a few years of exploring these other aspirations, and making unfathomable music industry connections, the girls decided to come together and focus on HAIM more seriously.

They have a great sense of humour. You can tell the sisters don’t take themselves all too seriously, they goof around in their videos and on stage.

Este’s incredible bass-faces. She’s so well-known for them that there are entire websites dedicated to her contorted facial expressions!

The HAIM star is on the rise. It was merely two years ago that they released their first EP to the masses, containing the tracks Forever and Falling. Days Are Gone, their debut album, was released in June 2013, wherein the single The Wire became a gigantic smash radio hit. They’ve been on countless magazine covers, made SNL performances, and have tour dates booked through til August. This rate of acceleration doesn’t seem scientifically possible, but when you’re signed with Jay Z’s Roc Nation management group, I suppose anything is!

They are coming to the Kool Haus in Toronto on May 15th, and you bet your bottom dollar that I’ll be in the audience. Come dance! The opening act is the American indie-pop band Tennis, meaning it will be a full night of feel-good dance grooves. Get your tickets here, and keep up with HAIM shenanigans by liking their Facebook page.