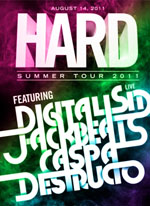 11am. 2011 Under Pressure International Graffiti Convention. @ several lower East venues, including Foufounes Electriques, 87 St-Catherine East. Under Pressure hosts dozens of globally-renowned and crazy-talented graffiti artists and DJs for a weekend of fresh paint with the best of the best in the underground art scene.

12pm. Queer Between the Covers @ Centre St-Pierre, 1212 Panet. Montreal’s one and only annual queer book fair returns with the 2011 Pervers/Cité programming. Support local LGBT organizations by checking out the queer-themed merch of bookstores, publishers and zines hailing from Eastern Canada and the North-Eastern USA. Until 6pm. Free.

3pm. Mega Yoga Jam @ Scène TD, Place Émilie-Gamelin. This huge two-hour yoga extravaganza, in association with Montreal Pride 2011, will attempt to beat the record number of participants who turned up for last year’s event in Toronto. Bring your friends, bring your mats, and get there early to grab a good spot! All levels of yoga are welcome. Until 5pm. Free.

10:30pm. A Night at the Races @ Espaces des arts, 9 St-Catherine East. The launch party for the Equeerie Project, the after-party for the Big Freedia Garden Party and the official closing-party for Pervers/Cité 2011 all combine, bringing together 17 of Montreal’s biggest DJ’s for an unforgettable gay bash. Two huge rooms of music and performance art debauchery! Until 5am. $6 before 3am, $12 after.

8pm. Hard Summer Tour 2011 @ La Société des arts technologiques (SAT), 1201 St-Laurent. Spend your Sunday dancing it up at the SAT, with the likes of German electro duo Digitalism, London dubstep master Caspa, British-based Jack Beats and the old school mix of LA’s Destructo. Until midnight. $30 in advance, $35 at the door.