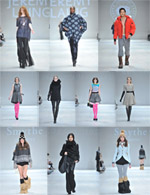 It was the usual scrum to find a seat but when we were finally settled the lights went dim and Jeanne Beker introduced Robin Kay who then introduced a head honcho from title sponsor LG and then back to Kay who cued a teaser video: A montage of Canadian designers lip synching Takin’ Care of Business and dancing with mops. It worked for me.

The purpose of the Holts showcase is to, well, show off what they deem as the top crop of Canadian designers available in store. It’s a wonderful way to kick off LGFW as you really get a taste of our varied talent. Too bad most of you will never receive an invite. Nonetheless, you should know these names: Jeremy Laing, Denis Gagnon, Lida Baday, Greta and Ezra Constantine, Pink Tartan and Smythe. Look for them the next time you walk into Holts for a spritz of Chanel No. 5, you may find yourself awed by Canadian design.

At such an eclectic show, it’s hard to summarize the trends for Fall/Winter 2011, so instead I’ll tell you what got me wiggling in my seat thinking, “Oh….I waaaaaant that.” Designer Kimberley Newport-Mimran, of Pink Tartan, consistently gives us clothes that are wearable and conservative but with a badass undercurrent that reads “I’m not always a good girl.” I liked how thick knits were mixed with S&M-like cuffs and thigh-high boots. Just enough superhero to make you feel like you can cut glass with your eyes but polished enough that you can actually wear to an event without feeling like you are in costume.

From Montreal, Denis Gagnon also had a ton of black for Fall/Winter 2011, but his was more industrious, more Massive Attack-y. A few looks were accented with bright pink stockings, “LIKE.”

The Queen West crowd always swoons for Jeremy Laing, and last night his collection felt extra dark and moody; just how we like it.  Jeremy’s collection was impressively diverse but certainly a 90s influence was seen throughout. I was reminded of listening to Nirvana in my bedroom and using a math kit compass to carve four letter words into my Dr. Martens. His evening wear had me reminiscing that first semi-formal. I couldn’t score a date, but did arrive in an awesome crushed blue velvet dress. Boys suck.

Clearly after a different demo, Smythe caters to the uptown Holts shopper, or the reliable money. The elbow patched daiquiri blazer, wooly sweaters and hairy mukluks were youthful, cute and made me think, “Gossip Girl does Sundance.” It’s definitely not edgy but it is absolutely warm cocoa apres ski that hopefully includes a steamy fireside make out. Am I making sense? Probably not, so let’s just say this: Blake Lively loves Smythe and so does Rachel McAdams, so there! Beat that!

The only oddball part of the show was when a male model came charging out wearing an enormous Canada Goose jacket, bare chest, droopy long johns and a grin from ear to ear. I get that Canada Goose is a cherished and successful homegrown brand but it didn’t fit. At all. And who wants to see that when for the past five months, it’s the only thing we’ve seen on every snowblown intersection? I can only assume a favour was due or that Canada Goose sales at Holts are an extremely important chunk of annual revenue. Probably both.