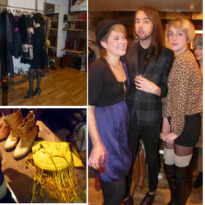 Dennis Adamidis didn’t have a chance to put price tags on his merchandise before a DJ, an open bar and about 200 West Queen Westers arrived to celebrate the re-opening of House of Vintage.

Adamidis’ previous store of the same name was a little further east on Queen and closed in June of 2008 because, quite frankly, Adamidis needed a break. He’s been working in the industry for 15 years, and now, a year and a half later, he’s built a high ceiling-ed, exposed brick vintage paradise in Parkdale, where according to Adamidis, you get more square footage bang for your buck.

The new shop features clothes from all over Europe and Japan, (“the best stuff comes from Europe”) in the $20-$250 price range. Though the store opens today, Adamidis already has his eye on the future. The space has a downstairs that will be redecorated into an extension of the store above with an exclusive focus on high-end designer pieces to be opened in the spring.

Adamidis cites this biz to be a combination of his three passions: design, material and antique and this is evident as soon as you walk into the store. “I’m a guy and I’m straight, I can’t wear any of this, but when you see a piece and it’s so fucking brilliant, it’s like, where did that come from?”

While the party was a rager – it had to be, the drinks were free – the real star of the night was the gorgeous collection of carefully plucked dresses, fringe vests and boots. Guests were seen cheek kissing and holding clothes to their body whilst trying not to spill their wine on the merchandise, a task, which especially after copious amounts of free wine, I knew I was too clumsy for. A mental note was made to return when I was sober.

Vintage Crawl: Plan a Night Walk To Hit All Your Favourite Shops for a Dreamy Summertime Adventure