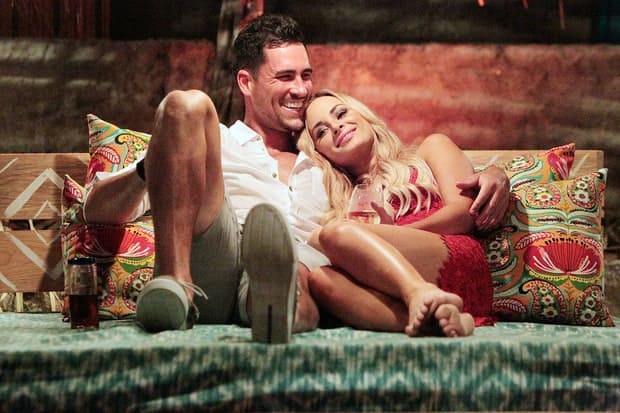 How Bachelor In Paradise Has Always Undermined Consent Culture

Last weekend, the media learned production had been halted on ABC’s hit reality show Bachelor in Paradise. The details of why this happened are still a little murky, but we do know it ended in response to a complaint made by a producer. The producer in question was upset by footage showing a lack of sexual consent on the part of participant Corrine Olympios, who was, by her own account, blackout drunk during the incident.

For those of you who are not familiar with the program, Bachelor In Paradise is a spinoff of the Bachelor/Bachelorette franchise. The premise is that a group of contestants (who failed to capture the affections of previous Bachelors or Bachelorettes) is dispatched to Mexico. They are put up in a gorgeous resort, supplied with copious amounts of alcohol, and are then encouraged to hook up. Supposedly, the goal of their two-week stay is to find love, but rarely do couples formed on the series last. In reality, Bachelor in Paradise ups the ante on the action from the franchise’s more romantic tent-pole shows. It often feels like spring break on steroids. put on film for posterity.

I am horrified by these allegations of sexual assault on a show I myself have watched – and sometimes enjoyed. I am dismayed that neither the bartender dispensing drinks, nor the producers and crew were able/inclined to intervene. I think it’s important, however, for viewers to acknowledge this is not the first time BIP has been problematic where consent is concerned. As a show, it has always peddled in rape culture, or – at the very least – undervalued consent culture. This is simply the first time we are talking about it.

The bread and butter of BIP are the outrageous and salacious scenes between inebriated adults in bathing suits. In the past, producers have included cast members known to be volatile, like Chad Johnson, infamous for his aggressive behaviour on JoJo Fletcher’s season of The Bachelorette. Unsurprisingly, after being invited to last season’s edition of BIP, Johnson caused a maelstrom of conflict and was later forced to leave. Drama has trumped safety on this spinoff.

Not only does the show ply people with alcohol, but its rules also undermine an enthusiastic consent paradigm. In order to stay, participants must be coupled off with someone of the opposite sex. Unlike on The Bachelor, where only the lead is paid, everyone here is compensated with a fee. Given how many contestants are paid per day, there is a direct financial penalty that results from not hooking up with someone from the very limited pool of people available. When cast members’ paychecks are on the line – and their judgment constantly impeded by alcohol – meaningful consent is always at risk.

Ultimately, I am saddened by what happened to Olympios but am relieved that ABC has all but cancelled this ill-advised spinoff. Even before this past weekend, its very concept was anathema to promoting a culture of consent.