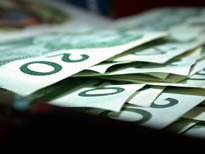 Like just about everyone between the ages of 12 and oh, dead, I’m always looking for ways to save money and increase what I have. Last year I read an article by Krystal Yee entitled “How I hope to give myself a $25,000 raise” and decided to make my own financial goal of earning an additional $7,000. While I didn’t quite make my goal, I did come pretty close, and learned a few good tricks about increasing my income. Krystal recently updated her goals for 2012, which made me re-evaluate my own – as well as sharing some with you guys.

I’m still looking at new ways for me to save money this year, but here are a few of my favourite tips that have helped me earn some extra dollar bills this year.

What it is: I’m sure most readers know that instead of paying your $3.00 fare every time you use our city’s fine transit system that you can sign up for a monthly pass instead that will likely save you money, depending on how much you travel. Lesser known may be that you can choose to have this pass mailed to you. In addition to avoiding waiting in those annoying long lines at the end of the month with all the other suckers, this option will not only give you an even lower fare, it will ensure that you won’t experience any of the fare increases until your one-year commitment is up.

What you’ll save: Called the Metropass Discount Plan, signing up will save you $10.50/month with the TTC’s current rate. I signed up last September, so my rate is still the original $111/month rather than the current price of $115.50/month. So sign up now and ensure yourself no fare increases for one year, the trouble of waiting in line every month, and the hassle when it’s a new month and you forgot to buy a new pass.

Yearly savings: Assuming you take transit twice a day, every day, at the current rate, you would save $804.

2. Sign up for loyalty reward programs – the good ones

What they are: If you’re really not familiar with Air Miles or Shopper’s Optimum Points, I really feel sorry for you… if you are, fantastic – just make sure you’re using them to the best advantage. On their own, Air Miles and Optimum Points can be good and maybe save you a few bucks here or there. Used to their maximum benefit, these babies can be money in your pocket. Air Miles are more basic – keep your eyes out for good deals at prominent Air Miles locations like Rexall Pharmacies and the LCBO. If you’re looking at two wines for example, grab the one with five Air Miles and it will begin to add up. They’ll also periodically send you emails asking you to take quick surveys with Canadian health care companies for example that can be worth about 35 points each. Optimum Points are a bit more complex. Watch for flyers and in-store ads that will alert you to their big sales. Every few weeks they’ll have a 10x or 20x the points sale – save your pharmacy purchases until then, and when shopping, really watch out for the in-store tags that promote further point increases on individual products.

What you’ll save: Air Miles is dependent on what you’re using your points for. It still takes quite a while to build up enough points to purchase a huge trip, so your best bet is to spend them on items that have a lower cash value. For example – I just purchased a $50 Boston Pizza gift card for 440 of my approximately 1,600 points. I’ll probably never save enough points for a flight, so this is a great deal for me, and is basically a free meal for my boyfriend and I. He also purchased a three-course meal at the CN Tower 360 Restaurant for about 555 points. – a great deal, even if we still have to buy the other person’s meal.  With Optimum Points, one of the important things to remember is to still look for sales. You also don’t want to buy things you don’t even need. Stock up on supplies that are on sale during the 20x the points events, like toilet paper, cleaning supplies, hair products, deodorant. Our latest trip cost us about $58, but we still saved $26, and everything we bought was on sale. We earned 530 regular points, but because it was a bonus event, we earned an additional 10,070 points. Another day like that will give us enough that we’ll have $170 free dollars at Shopper’s.

Yearly savings: Assuming you earn enough to purchase one gift card a year from Air Miles (let’s say $50), and you earn enough Optimum Points for a free $85, you’ve saved $135.

What they are: Whether you use Groupon, Travel Zoo, Travel Alerts, or your school has coupon packages, these little babies are everywhere – and they’re worth keeping your eyes peeled for them. It can be annoying to scour through the bummer deals, but there are definitely some gems available, especially if you tailor them to your interests. You might not always get the best quality, but sometimes that might be okay compared to what you’re saving. For example, when I was in college at Humber, I purchased one of those four-service deals – you know, the massage, the pedicure, the manicure and facial. It all came to about $100 – a good buy for a stressed-out student on a budget. The catch was that the services were from students at a local beauty school, which wasn’t a problem until I went to use the massage coupon. When I arrived at the school, no one was prepared to see me, so they had to interrupt a class and asked in front of me who wanted to do it – and no one volunteered. I can hardly blame them for not wanting to go massage someone for an hour instead of getting the education they paid for, but it was certainly awkward. Not as awkward as me getting my massage while a mere curtain over a woman was getting a bikini wax for the first time, but still. Needless to say, I won’t be purchasing that coupon again.

What you’ll save: This can range from a few bucks to a few hundred, depending on what you buy. And don’t be scared about the bikini story above – amazing deals are out there. This weekend my boyfriend purchased a Travel Zoo deal for $189. This deal was for a two-night stay in a whirlpool room with a king size bed at the Four Points Sheraton in Niagara Falls and it included $40 vouchers for The Keg, Outback Steakhouse and Dave and Buster’s Arcade. That would have cost us at least $300 had we not had the deal.

Yearly savings: Obviously you’re not going to be buying a hotel package every few weeks, but even if you grab let’s say a dining deal a month (savings of $30 each time), a fitness deal (let’s say savings of $150) and two hotel packages, that could total $710 in savings.

Now, obviously these savings aren’t going to work for everyone and they’re not really meant to. If you’re really scrimping and saving every last penny, a weekend in Niagara isn’t worth anything to you. And it’s important to note that most of the above deals still involve you spending money to save money. The above deals are more about if you want to save money, but have the budget to still have fun.

So go out, have fun – but remember to keep your eyes peeled for the deals.

When You Make Less Money Than Your Friends

Lykke-Inspired Ways To Make Your Winter Commute Better in 2018