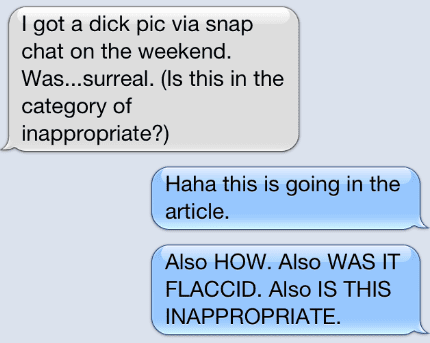 “I Can’t Believe You Texted Me That,” and Other Modern Qualms

Everybody knows you don’t text message break up, but in this age of heightened connectivity, the rules that guide what is appropriately communicated via electronic device—and what isn’t—are rapidly shifting. Pioneers like Kanye West push us towards new, flaccid-penis boundaries of acceptability, and it can feel almost impossible to keep up with what warrants a tweet, what feels okay to text, what works in email form, and what you really just need to pick up a god damn phone to say. (“Hello, it’s me, Kanye West. I have a large flaccid penis.”) From workplace questions, to friendly queries, to relationship qualms, to sassy quips (too far?), you want to make sure you’re communicating effectively, and your chosen medium is a huge part of that. But too often, it can feel like expressing yourself is a gauntlet of #BlurredLines (yes, I get paid by semi-relevant cultural reference).

The key here is to make sure that, no matter how you’re expressing your concern, love, or even anger, it never feels like an afterthought. (Or maybe it’s to stop taking advice from people who are still blogging about the Kanye West dick pic.) If picking up the phone isn’t an option, try to contextualize the communication. Don’t send a triggering or testy email to someone’s work account at 2pm on a Wednesday. Don’t send a sext when you know they’re out for dinner with their parents. Don’t text your friend about a difficult subject when you know that she’s just trying to get through her day. And when in doubt, when you need to let the person know they’re in your thoughts but don’t want to bring up tough subjects over Gchat, a short, “Thinking of you,” text or email sends the message without demanding they dwell. The idea here, at least from my perspective, is to bridge the time between meaningful conversations with reminders that you care. Don’t replace the Big Talks with a barrage of texts, but take advantage of the fact that it’s now so much easier to send a small reminder of affection or concern.

At work, things can be even more complicated. Casual or non-traditional professional environments mean our relationships with our superiors are far less formal than they used to be. And when you’re in a late-night panic, it can seem natural to text your boss (SORRY, JEN). But unless it’s something they need to deal with immediately—a capital-C crisis—send an informative email. And like most things at work, take a cue from your boss and communicate in the medium that they use most often.

Communication, unlike Kanye West’s internet penis, can be hard. But we’re lucky; it’s easier than ever to stay in touch with the people we care about (nothing says I miss you like a Snapchat of a man’s face Photoshopped onto an avocado). Just remember that these channels are designed to SUPPLEMENT the classics, not replace them. Make time for Facetime. ©

The Face Behind The Phone

Talking Kanye, Culture, and Kickstarter With The Women Behind My Beautiful Dark Twisted Fantazine