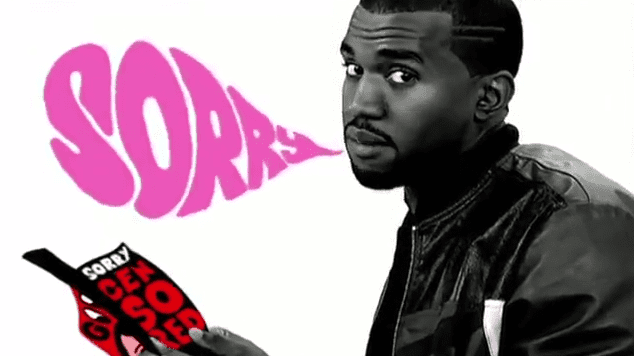 Talking Kanye, Culture, and Kickstarter With The Women Behind My Beautiful Dark Twisted Fantazine

Fariha Roisin, Haley Mlotek, and Sarah McCulloch are “three freelance writers living in Toronto who have a lot of feelings about Kanye West.” These feelings led to fandom, and that fandom has now led to an ambitious fanzine project, the Kickstarter for which wraps up TOMORROW. We chatted with these talented women about attitude, “Givenchy Kanye” and what we talk about when we talk about Mr. West.

Let’s get this out of the way at the beginning: Why a Kanye zine? Why do the people need this, and why are you the ones who want to create it?

HM: I think people need this because, first, I always think we need more intelligent commentary on contemporary pop culture, because so much of what already exists is either extremely academic or TMZ-ified, writing that either goes too high or too low, and I’m always looking for that perfect balance somewhere in between. The writers we’re working with have, in our opinion, consistently achieved that balance, celebrating what they love and connecting it with other influences and references and personal feelings, without using too many buzzwords or gifs, you know what I mean?

FR: We’re three women trying to make a homage to a truly unique individual. His remarkable creativity, and not to mention resilience, is unquantifiable. It’s not hyperbolic to suggest that there’s no-one else like Kanye, and I doubt there ever has been someone like Kanye. He is a Renaissance Man—a person with a vast amount of vision, and potential. People need this publication because there’s relatively very little about him, and there should be more! The lack of positive things about him is also emblematic of the racism involved in the discourse with rappers in general.

SM: Recently, Kanye said that he would never write a self-help book, which is strange because he’s one of the few people who should write one for artists. I mean if you watch any interview—watch the “full” version because a lot of the important, poignant, smart things he says get cut out—you realize he’s this person who just wants people to do more, try harder, and dream bigger. Kanye is a dreamer who actually does things. More importantly, he’s always fighting for his vision. With all this—always at the back of my mind—I have wanted some kind of beautiful space that could properly examine and critique his art. I mean Kanye has a reputation for recognizing and nurturing talent, so why not appreciate his talent? Why not create a beautiful space that filters out all the Jimmy Kimmel noise so his work can be examined and critiqued properly?

I know this is mentioned on the Kickstarter, but I want details: Favourite Kanye song, and why?

HM: “No one man should have all that power” – a perfect line. Power is my misandrist anthem.

FR: I’m with Haley, POWER is my favorite Kanye song. Close second, though? Devil In A New Dress.

SM: Right now, it’s not really a song, but it’s the last listed track on The College Dropout—”Last Call.” It clocks in at just under 13 minutes and it’s Kanye recounting all the steps and struggles leading up to the making of The College Dropout. He lists every success and every failure. It’s really an anthem for anyone out there trying to do something different; trying to carve out their own path. The song is there for you when you really need to put things into perspective. It always reminds me to stop taking no for an answer.

Talk a little about how the project came to life. Have you been planning this for a while? When did you decide to go for it?

HM: It was definitely one of those things where I kept talking with so many different people about all of our different Kanye-related feelings, and just seeing firsthand so many thoughtful, insightful, and really necessary opinions about Kanye West and his music that were already out there. When Fariha and I met for the first time in Montreal, we were just drinking coffee and sitting outside and the conversation went to Kanye, as it often does with me, and I just said something like: this should be a zine.

For me, that was a turning point: after I’d said it out loud, I had to make it happen. When I got back to Toronto Fariha and Sara and I started have Skype meetings and started asking writers and artists we knew if they would be interested and it really, truly, just fell into place.

FR: As Haley mentioned, it all happened over coffee. We were fangirling one moment—and next moment it was an idea that seemed really possible and tangible. Like the best things in life: calibrating our ideas was so simple, which is in large part because we, as a team, are a well oiled machine. Plus, I’m working with two amazing women, who, like Kanye, are also LEGIT AS FUCK.

SM: Back in May, Haley emailed me and was just like “I want to do a Kanye zine with you, Fariha.” I remember how Haley and I had just…one of those weeks, and we were talking a lot about how unconventional ideas get suppressed. We had an email thread going called “feels.” So, when Haley replied to said email thread with the Kanye zine idea, the first thing that came to mind was this deleted Kanye tweet that Rawiya Kameir found online: “Feelings are the only facts.” What I mean to say is that I replied “YES YES YES YES.” Haley has always known how much I love Kanye and she’s clearly a wonderful enabler. Also, Haley, Fariha and I have been emailing each other essays, pictures, tweets, about Kanye for a few months now, so I guess we were really itching to do something about it.

FR: As a woman of color, I really appreciate, admire and necessitate the “George Bush Hates Black People” Kanye—he should never have apologized, it’s ridiculous. He’s impulsive, but he has integrity, something people are unfortunately unmoved by. I admire his tenacity to make matters right, to call, question and challenge societal norms—he does that a lot with his music but he’s shaking us, forcing us to wake up and see the world as it is.

SM: I love Kanye in interviews, obviously. I also love Kanye on Twitter. But, the biggest moment that still resonates with me is when he announced The Glow in the Dark Tour. I mean, those visuals. I remember wondering how the hell he could pull that off—the risk, the artistic ambition. I’m sure he was saying this well before Glow in the Dark Tour, but this is, for me, the moment when Kanye gave us a peek into his rich inner world.

Describe an important moment you’ve had with Kanye’s art. How has he figured into your lives?

HM: Most of the really important moments I’ve had with Kanye, the artist, have come not from his music or anything, but really from the conversations I’ve had about Kanye, seeing for myself all the different opinions that were out there. Everyone had unique and beautiful opinions (special snowflakes!), but there were basically two camps: Kanye is a flawed genius and/or role model, or Kanye is an idiot masquerading as someone smart. I think everyone can guess what camp I fall into.

I started finding myself at parties with people who had very loud opinions that were very different than mine, let’s just say, and at first I tried to be polite and understanding, but when I started to hear that there was no way Kanye West could possibly understand the works of the artists he was referencing, or at least understand them enough to incorporate them into his visual imagery, I thought I was going to lose my mind with rage. Like, let’s just go there: those people can go fuck themselves.

So, as counterintuitive as this might be, it was really the rage that motivated me to start thinking really seriously about what Kanye West means to me, what he means to music, to pop culture at large. I don’t know if this zine would have happened if I hadn’t had this specific kind of rage-fueled incentive.

HM: At first I was going to say Yeezus, because I think that’s the one I love the most, but it might actually be My Beautiful Dark Twisted Fantasy; I find that to be the one I listen to the most. The College Dropout has the biggest hold on me, in terms of nostalgia, but I don’t listen to it as much because it reminds me of being sixteen, which was the worst.

FR: My Beautiful Dark Twisted Fantasy is his magnum opus. It’s the album where his lyrical genius became an actual tangible, sensory entity—he’s sexy, he’s funny, he’s angry, he’s mad: it’s the very essence of Kanye—it’s him at his best.

SM: Usually, it’s a new Kanye album, freshly leaked on the Internet. I change my mind every week. But the only album that got me through this horrible winter—and that I somehow only discovered this year?!—wasThe Late Orchestration. I have never seen Kanye live [cue quiet sobbing noises], so this is the closest thing I have to it. It’s live recordings of songs from his first two albums. There’s an all-female orchestra. Just listening to the crowd’s reaction when Lupe Fiasco jumps onstage for “Touch the Sky,” still warms me up. If you’re just listening to it (which, there is a video of it, of course), you can hear Kanye smiling, if that makes any sense. Just listen to it and you’ll know what I mean—you have to be there.

If you had fifteen minutes with Kanye West, what question would you ask him?

FR: “I’m Cancer Rising too, we’re destined to be friends.”