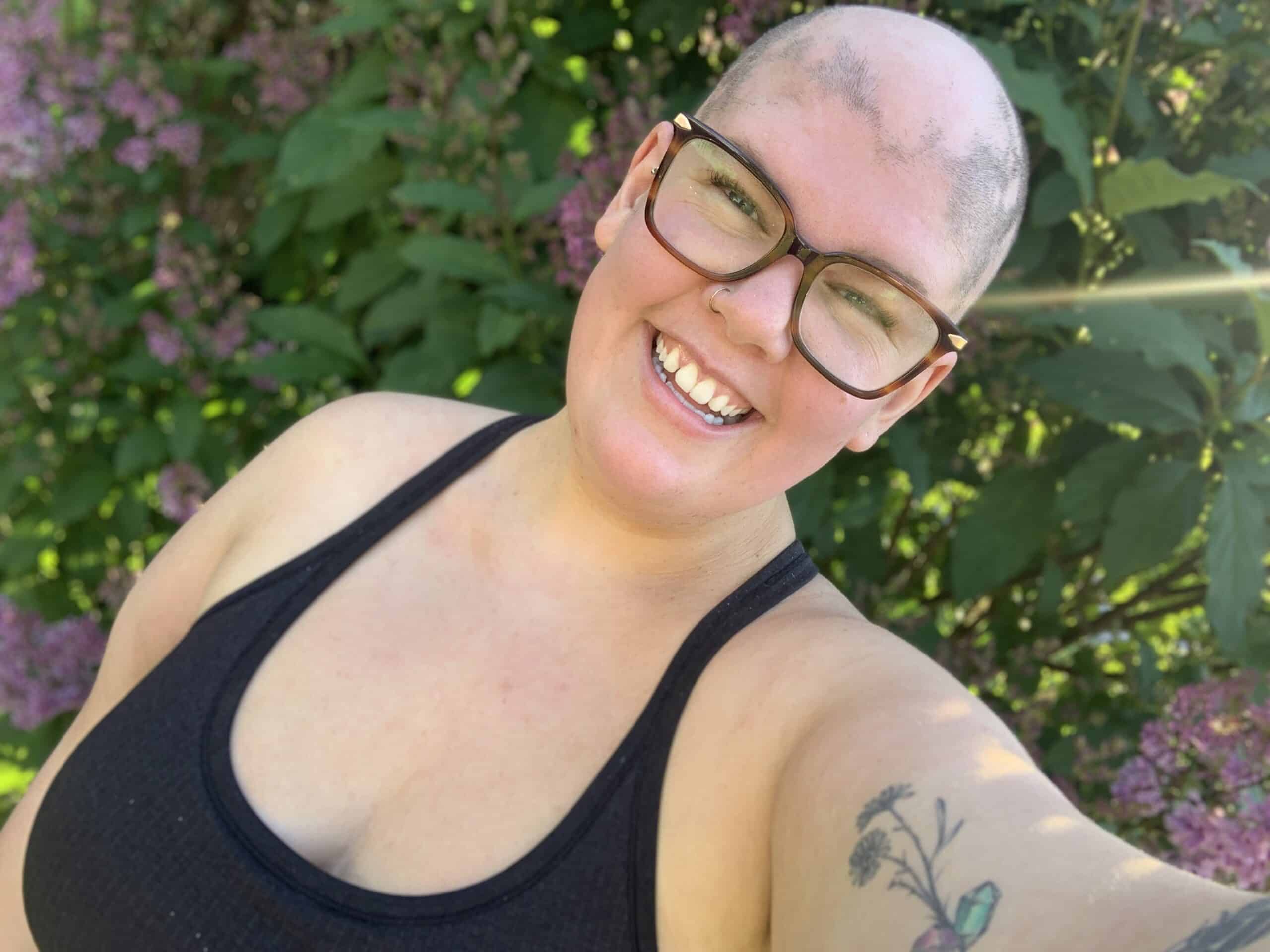 "Handfuls of hair would fall onto my lap as I was typing."
Life Stories

My hair has always played a big role in my life. Bangs, perms, long hair, bob cut, different colours—I have been changing it as often as physically possible since I was 13. Being creative with my hair has always signified new life chapters. Cut and dye transformations have represented my evolving identity. So what does it mean now that I’ve lost all my hair?

I have alopecia areata, a disease that causes hair loss. In alopecia areata, the immune system attacks the structures in skin that form hair (hair follicles) It usually affects the head and face, though hair can be lost from any part of the body. Hair typically falls out in small, round patches about the size of a quarter. In some cases, hair loss is more extensive. In my case, it has been very extensive.

The first place I began to lose hair was a small round spot on the top of my head. Since I’m tall, it was easy to cover. Initially, I wondered if it was because I always wore headbands, or perhaps it was stress induced. I didn’t think too much about it. But then things got worse. 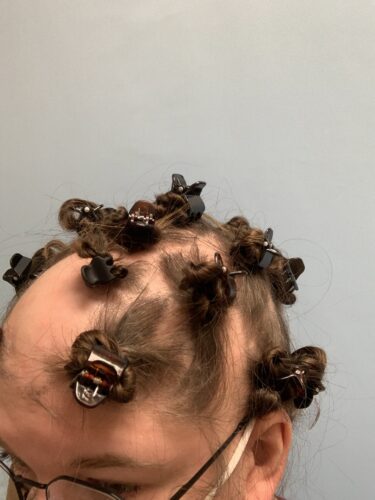 What started as the size of a quarter grew to the size of a tennis ball. Because of the pandemic, I wasn’t able to go in and see my doctor, so I made a virtual appointment. He advised me to just wait and see. I tried to explain how drastic the changes were, but I was given no treatment. I was distressed, anxious, and I felt my confidence dropping each week that I lost more hair.

It took me 6 months to get to an appointment with a dermatologist, and only because a cancellation bumped me up. By the time I saw this new doctor, my case was too severe. I couldn’t get cortisone injections, a popular treatment for alopecia. And I was way past the point of topical treatments, which are also common.

While I missed out on those options, I was selected for a clinical trial and have been doing that for the better part of the last year. What this looks like is monthly visits to the dermatologist where they count all the hairs on my head and take blood (so many vials of blood that I feel like a tree being tapped). I get an ECG, have my weight recorded, and answer a tedious questionnaire. Now I’m on the trial drug, and even though I am trying to be optimistic, I am back to doing the same thing: waiting.

I was not prepared for the toll that hair loss would take (and still takes) on my mental health. A certain level of trauma occurs when your body goes through dramatic changes quickly and I haven’t really come to terms with it. Not 100%, anyway.

In the early months, I was constantly trying to hide the patches while on endless Zoom calls for work, hiding my ‘self-view’ so I wouldn’t have to look at myself, and eventually opting to be off-camera. Handfuls of hair would fall out onto my laptop as I was typing.  Showering became a traumatic event, as the hair would cling to my hands in the water, no matter how gentle I was. 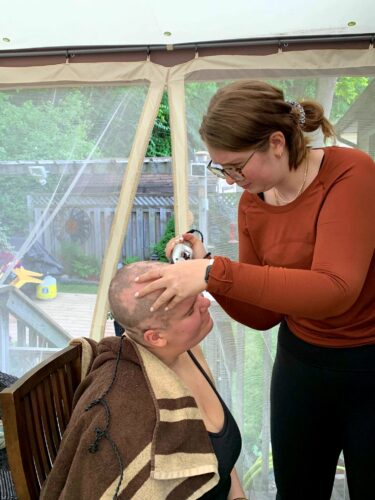 In June I made the choice to shave my head – it was something I had been considering for awhile, but was hesitant, because I knew there’d be no going back. Some family and friends tried to dissuade me, saying that I wasn’t at “that stage” yet, but when I saw a photo of the back of my head, where longer hair was no longer able to cover large bald patches, I decided it was time. So that Friday, after work, I took two shots of vodka and presented the clippers to my mom in the backyard. I figured it was best to just commit and not dwell on the idea any longer.

Immediately I felt liberated. Free. Yes, I lost all my hair, and yes, sometimes my reflection still startles me months later, but I feel like I won in a battle that I was never prepared for.

While I have begun to slowly acquire a collection of wigs, they still make me feel like I’m hiding. There shouldn’t be any shame in wearing a wig, but it never really feels right.

Both men and women go through hair loss. When a man goes bald, it becomes a running joke, even if it is a point of sensitivity. But it’s associated with growing older, and most often accepted, sometimes even considered sexy. When a woman loses her hair, it isn’t met with the same acceptance. It’s not talked about as often and I can understand why: losing your hair as a woman feels like you are losing your femininity, even if that’s because of outdated beauty standards. 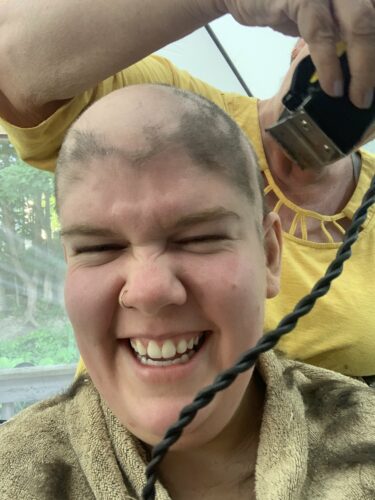 I have lost count of the number of times I’ve been called “brave” for shaving my head, or for sharing my story. I have a hard time with that word. Brave. I don’t feel brave – I spend a lot of time replaying choices I made within the last year and wondering if a different choice would have avoided this. I don’t like my appearance most days. I have cried, been in denial, and grieved what I have lost. What I am, without a doubt, is angry. I am very angry.

There is no cure for alopecia areata. My hair might never come back—I have accepted that. I have also accepted that it is okay to be upset by that. Because at the end of the day, I have lost something important to me. I just have to remember that while my hair was a part of my identity, a part that I really enjoyed, it was just a part. Maybe not yet, but I can learn to feel wholly myself again. 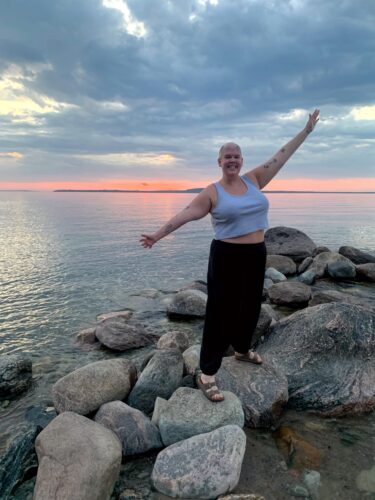 "Handfuls of hair would fall onto my lap as I was typing."

Embracing and Loving My Gray