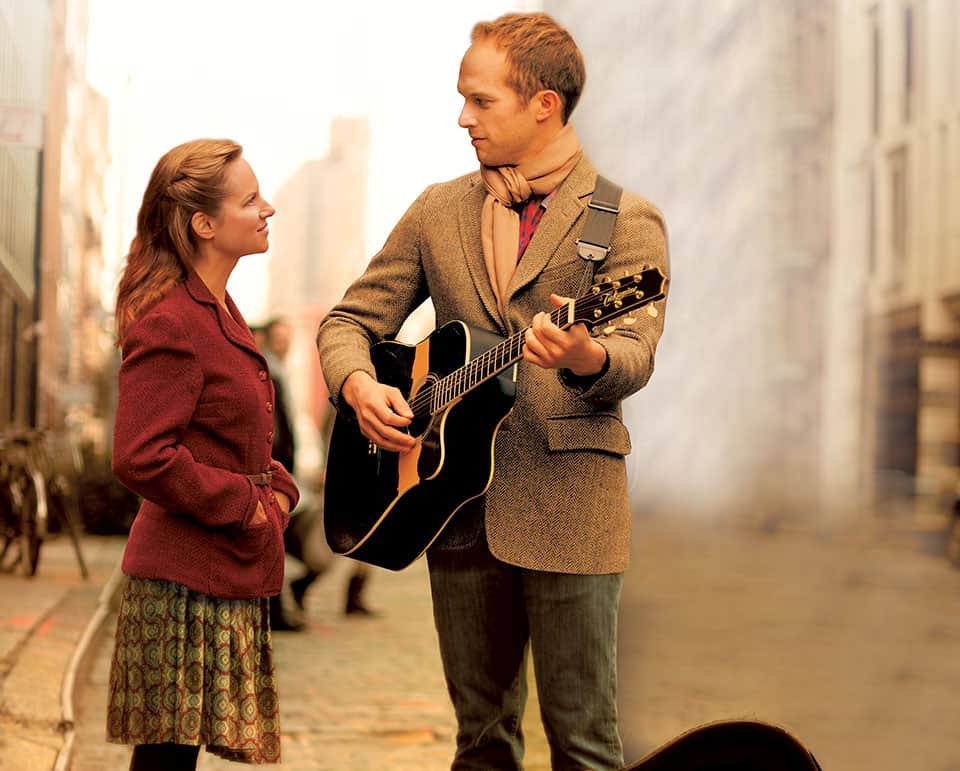 I went to Mirvish Date Night and It Was…Meh

Single? Check. Theatre lover? Check. Match made in heaven? Not quite.

On June 3, I was one of the 1,200 single Torontonians who participated in Mirvish’s “social experiment”: a blind date conducted by the theatre giant in which singles were matched by a computer based on gender, orientation, age, and their favourite stage musical. The date: a free ticket to the musical Once at Ed Mirvish Theatre.

As I entered the super long TIFF-ish queue to pick up my ticket and learn the name of my date, I wondered how I even found myself there in the first place.

“How’s it going?” My mom texted me as I joined the line. Oh, yeah. It was her fault.

My Lorelai Gilmore-like mom had received the Mirvish Date Night email and quickly signed me up without telling me beforehand (this is what happens when you’re over thirty and single – you get the “Mom worry” interference). I knew something was up when she asked me what my favourite musical was, but I brushed her off, thinking she was doing some BuzzFeed quiz. I immediately regretted this when I a) received her forwarded email about the event (“I signed you up for this!”), and b) realized she had checked off the Rent option. Don’t get me wrong, I love Rent, but I wondered how many straight men would.

I suppose I could have just not shown up (as some people did, more about that later) but here’s the thing: I’m not an online dater. I’ve tried it, and I hate it. That’s right, people, I am anti-Tinder. Call me a Luddite, but I like relationships to grow from something natural rather than from forced interactions. I’m big into feeling and reading other people’s energy, and you just can’t do that very accurately through a computer screen. I prefer when relationships are borne through friendship and/or shared experiences, which explains why the men with whom I’ve been involved in the past all happened to be associated with IRL interests of mine: improv, writing, food. Theatre also happens to be a big passion of mine, so, I thought – why not? If anything, I’d at least be able to write about it.

“It’s weird,” I texted Mom back. “There’s some crazy weird energy happening around here.” The line-up for registration was basically a rubber-necking meat market wherein people eyed each other up and down anxiously, crossing fingers and toes, hoping that you were, or weren’t, his or her date. I couldn’t help but laugh out loud at the absurdity and awkwardness of it all.

This is what happens when we get out from behind our tablets and iPhones and decide to put our dating future into the hands/algorithm of a “computer” without a picture to judge: we get scared shitless.

“You’re brave for going there,” a friend of mine said to me before the big night. “Going without knowing who he is.”

I love Google. I really do. I am pretty much Nancy Drew when it comes to Google sleuthing. But I also think Google, along with online dating websites and social media, has ruined the surprise of dating for us. I hate to sound all “Bachelor Nation” but dating is supposed to be a journey: discovering each other’s interests, discussing one’s occupation, revealing fond family memories – these are relationship touchstones that should unfold naturally and not be reduced to “but that’s not what your Facebook says.”

I can remember the early 2000s (oh, god, how is that even a thing?) when my first boyfriend, whom I met at the restaurant where I worked, had to muster up the balls and say something funny and interesting to ask for my number TO CALL ME ON THE PHONE. There had to be a real human-to-human connection in order for things to progress organically. It was exciting to discover new things about him for the first time.

Nowadays, in our cynical “swipe left” world, I would have totally Googled him before our first date even happened. I wouldn’t have to earn that trust or share that intimacy about getting to know him because his LinkedIn would’ve told me what he did for a living, and his Twitter account would reveal his sense of humour (or lack of). The date would be pretty fucking boring.

And what do “dates” mean today anyway? They’re practically disposable. Just swipe right, and bam! You’re on a date. And another one, and then another one. And most times you’re banging, not talking. I think it’s safe to say that dates have all but lost meaning and magic.

So I suppose it was in search of that meaning and magic that I, and 1199 other single people, went on the “world’s largest blind date.” When I finally entered the theatre, I was given my ticket, complimentary drink chit and the name of my mystery date.

“My mom told me about it,” a young, nervous-looking twenty-something told my friend and I as we walked into the lobby. He shrugged, “You never know.”

Of course, there were some cynics – or realists, depending on your POV. Like the two ladies who stood behind me in line at the concession stand prior to the show.

“If he has bad body odour, then we pull the chute,” said one. “Or bad breath.”

“And we will definitely leave during intermission.”

“You’re already planning your escape route?” I asked them.

“Totally,” one said. “I got matched with a guy named Kay. What fucking guy is named Kay?”

There were actually a number of no-shows, including my friend’s date “Laura.” Maybe her grandmother died, but, more likely than not, she bailed. I understand the anxiety and fear of “What if he smells bad?” or, “What if he’s my second cousin?” but “what if,” at the very least, he turned out to be a good friend? Your loss, Laura.

My date showed. I found him in his seat beside mine, half-an-hour before curtain. We chatted, and it was okay. But there wasn’t any attraction or chemistry (on my part, anyway), which is an essential must-have for a first date. I also soon discovered that he lied about his name, so it caused me to wonder what else he lied about (when I asked which musical he chose, he told me Once, which didn’t make any sense). Suffice to say, we didn’t talk much after the first act.

Intermission was frenetic. My friend and I surveyed the room from the balcony above the lobby. Some couples were chatting while most people clung to their phones or waited patiently in line for their much-needed free booze. Female friends clustered in groups, single guys commiserated. It was a mingling mess.

“Why should I stay?” asked my friend. (Thanks a lot, Laura.) And I wondered, why did I go?

But here’s the thing. Although my experience with Mirvish Date didn’t end up being a “meet cute,” as I looked around at the 1,200 singles in the theatre, I was hopeful. More than 5,000 people registered for the event – and that’s not including those who were too late to register. You know what that means, single friends?  It means there is a shitload of single people in Toronto who are looking FOR YOU. So, that familiar feeling of “everyone’s coupled up but me” is bullshit.

There are people to meet who are just as awkward and self-conscious as you are. Connecting with them might be a matter of stepping out of comfort zones and risking something – like a ridiculously huge blind date – other than swiping right when you wanted to swipe left. When dating has become about metrics, it’s time to rethink that more doesn’t always equal better. Things got uncomfortable at the Mirvish Date, but guess what? That’s what real intimacy feels like. It’s fucking horrible until it feels awesome. That’s dating IRL.