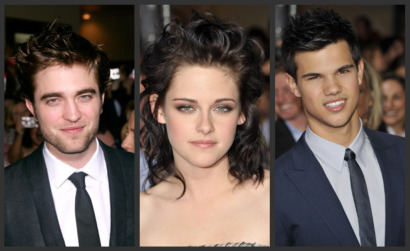 I Drank The Twilight Kool Aid

I resisted for a long time. I really did. I made all the usual protestations-I’m not 12, I have a life, I feel no desperate desire to swoon over barely-legal werewolves jacked up on steroids-I’m better than that. But guess what? I’m not. I’ll admit it. The war is over, they won. And by they, I mean the ferocious swarms of hormonal girls swooning in theatres country-wide this weekend, sighing over Taylor Lautner’s pecks and Robert Pattinson’s broody stare. Pre-teen hysteria, take me, I’m yours.

What it comes down to is this: you might as well go see New Moon. Why, you ask? Because it’s awesome. If it’s already too late-and you know who you are, those of you with plastic vampire teeth already in place even though you’re far, far too old. Those of you rooting around the closet for mouldy old Halloween capes, those of you surreptiously hiding tell-tale book bindings on the subway-then you know what I’m talking about, because you’ve already seen it. And so have I. All it took was one professional obligation to fill a seat at an Amex Gala Preview Screening to break the camel’s back, and turn me into a bona-fide Twihard.

The movie is a serious crowd-pleaser. Fans and newbies alike will squeal with delight as the otherworldly cast gazes beautifully at one another, experiencing passion and pain heightened by the ever-present threat of death. The movie holds true to the book and makes no frustrating deviations that aren’t necessary. A seriously beefed-up budget is definitely noticeable-especially where the costumes are concerned. The cast looks less like the rejects from a 1998 casting couch now, and more like the tween dreams they’re supposed to be. And whether you’re a Jacob or an Edward, there’s enough slow-motion shirtlessness to keep you salivating for days. The addition of some ferocious new friends-from Jacob’s pack to the eerie Volturi-add some cinematic colour to Twilight’s ever-present cloud cover, and despite the occasional slip in to unnecessary CGI images of Robert Pattinson, the movie feels a lot less like something you should be embarassed to admit you’re obsessed with, and a lot more like-gasp-the cultural phenomenon those damn kids have been telling us it was since the beginning.

What This Month’s Full Blue Moon Means To Me