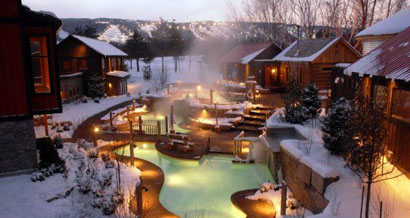 Instead of chugging my face off, I spent New Year's Eve at Scandinave Spa in Collingwood

Last year, I had a weird feeling that I wasn’t going to be hosting another balls out New Year’s Eve party for a loooong time. I can’t explain it, but something in me switched; I’m glad it did. This year, instead of ringing in the new year with a deathly hangover that has me cawing for w-a-t-e-r at the crack of dawn, or worse, staring into the toilet bowl, I woke up feeling rejuvenated, glowy and ready to take on 2011.

At 2:30 pm, my husband and I began our trek to Collingwood. We tuned into CBC Radio and listened to all of the year-end programming for the duration of our ride. I find that all CBC radio hosts have soothing voices that immediately calm, except for maybe Stuart McLean, who sounds more like a bible thumping preacher. The sky was grey and spitting cold slush but clean feeling. A smile came over me when we reached the rolling terrain dotted with horses and hay. I should really leave the city more often.

We stopped at a diner for a bite and watched as the servers delicately teetered on stools trying to hang up the last remaining twirly streamers and balloons. Locals had already begun to gather to get a head start on their cheer.

By the time we pulled into Scandinave Spa, it was already dark. The hot pools were lit up and the glistening turquoise water radiated steam while snow banks lined the perimeters. Looking up, you could see the night skiing on Blue Mountain and in the far corners of the spa, fire pits crackled and filled the air with a smoky cedar scent. The only other sounds were of the jets by my back, soft whispers from other guests and the sound of water dripping down a wet body onto stone. Someone should mic this and play it in a yoga class.

I suppose most had opted for a big bash because the spa was sparsely populated, giving me ample space to paddle and wade around. I tiptoed from the hot pool to the steam room to the sauna to the fire and occassionally braved the cold plunge pool. Twice I nodded off in the wooden bench rest areas but this was perhaps induced by the antihistamine I’d taken in the parking lot.

We lazed around until 9PM and then began our journey back to the city. We were lucky to drive towards a spectacular fireworks show at the foot of the mountain. Jian Ghomeshi’s Q came on at 10pm with Best Ofs interviews featuring Neil Young and Sarah Silverman. Just south of Barrie we listened as Randy Bachman plucked his guitar and played songs he had forgotten to during the year. I know it sounds like we are a couple of sixty year olds, but it was perfect. We popped Ferrero Rocher’s in our mouth and returned to our home just in time for Auld Lang Syne. Slow dance then up to bed.

To my astonishment, our sober NYE was pretty heavenly. I doubt there’s a better way to kick off a fresh new year.

Scandinave Spa has four locations in Canada: Collingwood, Gatineau, Mt. Tremblant and Whistler. It is open seven days a week from 10am to 9pm. Towels are provided free of charge but I recommend you bring your own robe and flip-flops. Beyond the baths, Scandinave offers a variety of massages and relaxing day packages. Honestly, you should make the trip.

Taking The Plunge: The Benefits of Cold Therapy