Last January we told you about Brotherhood: The Hip Opera, the one person show written and performed by National Theatre School graduate Sébastien Heins. On Friday, June 28, Sebastien will be performing Brotherhood at a fundraising party for The Olive Branch for Children.

The event, entitled  A Branch For Brotherhood, will be held at Young People’s Theatre (165 Front St. E.) and has been organized by Dasha Peregoudova and Brooke Daprato in conjunction with Deborah McCracken-Nangereke, the founder of The Olive Branch for Children.

We talked with Dasha, who in addition to her humanitarian efforts is a past elite taekwondo athlete and soon-to-be law student, about her involvement with A Branch for Brotherhood and her hopes for the event.

Shedoesthecity: Tell us a little bit about yourself and Brooke Daprato and the charity work you do together.

Dasha Peregoudova: Brooke and I met in middle school, and have been best friends ever since. Brooke has vast humanitarian experience, works in the film industry, and is a caregiver to her younger cousin who has cerebral palsy – she is ruthless and selfless.

While our life experiences have taken us to very different places, we have always come together in wanting to give back to a world that has been so good to us, and less so to others. We also share in wanting to motivate and inspire others to do the same. Although we volunteer together locally, this is the second “Network for Humanity” event – a term we settled on five years ago while planning a fundraiser for Habitat for Humanity. We wanted to go on a big adventure and really take ourselves out of our element. We chose the most unlikely location – Mongolia. We planned “Music for Mongolia”, which was a huge success, and built 5 houses for 5 families in 2 weeks with a team. Ultimately, we care about bringing people together to foster inspirational, intentional relationships. We find that when this happens around a shared cause, people really break through the barriers that prevent so much incredible collaboration and shared understanding. Hence our “network for humanity”.

SDTC: How did A Branch for Brotherhood come about?

DP: We promised that no more than five years would go by before we did something even bigger and better than Music for Mongolia. Two things happened to spark this event. First, we got in a pretty bad fight. I know that sounds trivial, but we don’t really “fight.” I was running one day, and was thinking about what our relationship will look like in the next chapter of our lives. And the only way I could see us getting over the hump was to work together, because we do that really well.

We had met a fellow Torontonian, Deborah McCracken-Nangereke, who founded the incredible Olive Branch for Children in Tanzania not long before. Since first meeting Deborah and hearing her beautiful vision, there’s been no doubt in our minds that this is a cause that we want to both honour and support. I thought, “Brooke and I need to do something important. It’s time.”

We had seen Sébastein in Mr. Marmalade last summer. How funny the world is to bring us together with a childhood friend, after all this time. Sébastien and I went to elementary school together. I’m glad he’s taller than me now. His one-man show has not left my mind since the first time I saw it in December. Running that day, all the sudden, the shared values between The Olive Branch and Brotherhood: The Hip Hopera struck me. I called Brooke, we quickly forgot what we were mad about, and we dove in. We’ve been obsessed since that day in March. 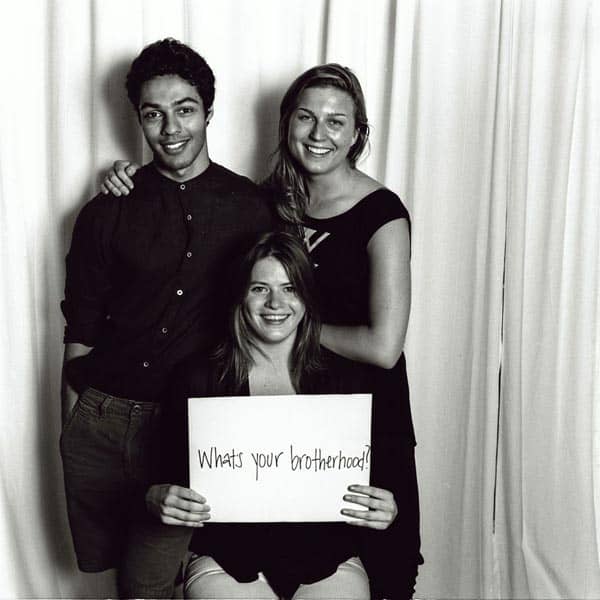 SDTC: Can you tell me a little bit about your partner organization, The Olive Branch for Children?

DP: The Olive Branch for Children helps remote communities in Tanzania assess their primary needs and establish programs that target the most vulnerable. They focus on HIV/AIDS prevention and care, early childhood education, food security, and vulnerable children and women. The fact that it’s led by a female powerhouse, Deborah, hits home with us, as we’ve never been afraid to stand out as strong women in our community. The fact that women connected to The Olive Branch are encouraged to lead and grow feels real and honest without being pretentious. The goal is to establish community-led programs that empower remote communities and generate models that can be replicated in communities throughout Tanzania and elsewhere.

SDTC: What can guests look forward to seeing at the event?

DP: It’s an evening of theatre, art, food, conversation… We like to have fun, inspire, and share. The play will speak for itself—it’s an incredible piece of art written and performed by a humble, wonderful, and talented person. We have a video compilation of footage we’ve shot and assembled from around the world, with everyone’s shared idea of brotherhood. A photography exhibit shot by our talented friend Jared Rosenbaum will serve as background for our reception, while Duncan Davies of The Treasures will serenade us with some beautiful tunes. Neal Brothers has been kind enough to donate yummy snacks, while Amsterdam Brewery and Charton Hobbs have graciously provided us with liquid fuel. Everything is biodegradable, as we’ve partnered with Greenshift. A huge canvas, which everyone at the event can contribute to, will go to Tanzania to go on the wall of the main orphanage. That’s all I’ll say for now, as there should be some surprises, but for a mere $25 bucks, we really just want it to be an accessible and special evening that people will never forget.

SDTC: Is there anything specific you’re most excited about for the event?

DP: We are most excited to bring such a diverse group together to celebrate the power of people. If there were any cause worth celebrating it would be The Olive Branch for Children because of its unwavering belief that we can make a difference without giving up our values. All the proceeds of The Olive Branch for Children go to the communities rather than administration, which has been one of Deborah’s strongest values for her organization. She firmly believes in the power of sending positive messages to empower those around her, and we want to create an environment encouraging that positivity right here.

It’s going to be a great, entertaining night. If you’re interested in buying tickets for A Branch for Brotherhood you can do so on their EventBrite page or check out more details on the Facebook Event. Thank you Dasha for sharing this fantastic event with us!