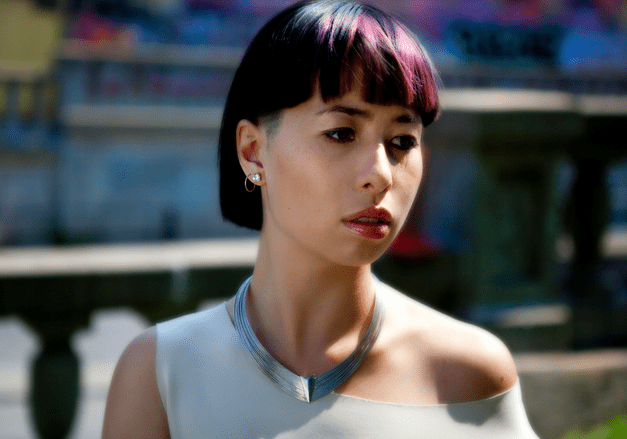 "Nobody blinks twice when I talk about Hua Li being from space."
Events & Culture

Want to see one of the coolest queer Canadian hip hop artists this weekend? Believe it or not, just $2 gets you in to see the amazing, multifaceted queer hip hop artist Hua Li this Saturday at The Dirty Hustle, a wickedly fun dance party that takes place at The Steady (full disclosure, I also run another popular event at this bar, but this is not about me, it’s about incredible hip hop). Keaton Kash Taylor, owner of the bar, describes The Dirty Hustle as “simply about having a sweaty, grindy, dirty hiphop dance party with a queer-positive crowd.” Taylor says keeping the good vibes and dance energy high is a goal of the event.

This is where Hua Li comes in.”We wanted to mix it up and bring in some live hip-hop to keep the party exciting,” says Taylor. Hua Li is the fierce and brash alter ego of Montreal-based alter-ego of musician and writer Peggy Hogan. Her bombastic mic stylings are on full display in this sexy video for Pinkett. What can we expect from Hua Li? “Her music and video is uber-creative, sexy and skillful,” says Taylor. This is a can’t-miss performance for several reasons, he says, not the least of which, the chance to “brag later that you were up close, shoulder-to-shoulder, seeing her in cool, little Toronto backroom bar.” I got an opportunity to interview Peggy Hogan aka Hua Li via email, in advance of the event. Here’s what this dynamic performer had to say.

STDC: Do you often get a chance to come out to Toronto to perform? If so, how do you like the hip hop scene here, and how does it contrast to that of Montreal?
Peggy Hogan: I can’t say I’ve been especially exposed to the hip-hop scene in Toronto outside of what’s happening within the queer hip-hop community. It seems like there’s some good music coming out of the city and people seem to be working hard, and that’s always nice to see from a music scene in any city.

How does your musical alter ego Hua Li intersect with Peggy, and where do they part ways? What can Hua Li do that Peggy can’t? and vice versa?
I often refer to Hua Li as my drag. She’s a character and as such, I feel like I have a larger range of expression with her. For instance, nobody blinks twice when I talk about Hua Li being from space, but if I started walking around the streets of Montreal talking to people about my home planet I might get committed. I’ve learned so many valuable lessons about identity and what it means to perform identity from going on stage, or DJing, or just being in social situations as Hua Li, that I can’t say that I necessarily think there is anything that Hua Li can do that Peggy can’t.

How does your identity as a queer, biracial woman impact the way you approach recording and performing hip hop?
I started Hua Li as a side-project, and my intention was to use the project to explore and experiment with electronic music and production and also to explore subject matter that I felt was too risqué for my jazz project. To me, it was more of an experimental music project than it was a hip-hop project so I consider myself a lot more embedded in a more electronic music scene in Montreal than I am the hip-hop scene here.

Do you feel there are barriers to entry in hip hop which you’ve had to overcome? How do your experiences there compare to those in other musical realms?
There have always been great female MCs in hip-hop, and I don’t think being a woman is a barrier. There’s a perception that women have to prove themselves more than men do in hip-hop, but I would argue that that’s been the case in almost any genre of music. I encountered situations like that in my jazz education and the professional jazz scene, but I don’t consider it to be a huge stumbling block. Ultimately if you’re a hard-working, talented musician with something to say, people will recognize. I’m much more focused on growing as an artist and having integrity in the material I put out than I am on the way privilege dynamics play out in the music industry. I represent for marginalized communities with my music because I think that’s the best way for me to express myself as an activist.

Who do you consider your influences musically? Do think coming from a jazz background changes the way you approach recording?
I think my musical education taught me discipline from an early age, and makes me a serious self-critic; I’m rarely ever happy with my recorded material because I’m constantly working on my craft. I listen to my music with the ears of a critic, whereas I listen to most everything else with the ears of a music lover. My jazz training has made me aware of all sorts of technical details in music, but it also taught me how to be expressive in the moment as a performer and how to listen and respond to what’s going on around me musically. It’s an essential part of musical practice no matter what genre I’m dealing with.

The Dirty Hustle happens Saturday, April 12th at 10pm at The Steady (1051 Bloor Street West). Cover is just $2 (seriously!). Join the Facebook event here. You can check out Peggy’s tumblr at http://huali.tumblr.com/

"Nobody blinks twice when I talk about Hua Li being from space."