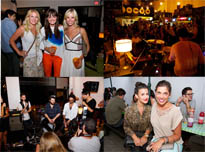 inTO's inaugural Living Room Jam, hosted by Marcello Cabezas, Mary Kitchen and Jeffrey Remedios, features a performance by Eight and a Half

The party was called the Living Room Jam, and the 2,800-square-foot venue suited the casual house party-style soiree, with retro mismatched couches, coffee tables and a ground-level “stage” set-up. Party-goers not only enjoyed an exclusive night out that was meant to feel like a night in, but also got to rub shoulders with hosts Mary Kitchen, Jeffrey Remedios and Marcello Cabezas as well as members from band du jour Eight and a Half.

Taking a moment to chat with keyboardist and percussionist Liam O’Neil (formerly from The Stills), we learned that he was an early supporter of SDTC – thanks to our support of his friend’s clothing line in Montreal: Lustre Boutique.

Apparently O’Neil and his Stills counterpart Dave Hamelin met Broken Social Scene’s drummer Justin Peroff while at 2003’s SXSW and they became fast friends. Affable and passionate, O’Neil also mentioned that his magnificent beard has been in the works since 2005 (with minor trims) and says that fans of Eight and a Half should expect some remixes coming down the pipeline.

Despite the party being held at a restaurant and not a music venue, the band sounded flawless – with a melodramatic yet hopeful sound that’s akin to The Postal Service. Eight and a Half’s music aims to tug poignantly at your heart strings with a subtle ass-kicking: O’Neil’s layers of synth combined with Hamelin’s wistful vocals and driven by Peroff’s electro-acoustic power drumming.

While Peroff’s snare stand may have collapsed at some point during their set, Eight and a Half definitely put on an emotionally-charged performance for an intimate crowd of 100 Torontonians that was both experimental and uplifting.

The Living Room Jam was an inaugural event in the series of arts and culture evenings popping up all across Hogtown, and those who missed the first one can rest easy – inTO is just gaining traction.

Cabezas, who played an integral part in the launch’s success, describes the inTO series as “a two-way conversation between an artist and the audience,” and Kitchen, who also values this intimate connection, proudly says that while our city hosts “amazing cultural experiences, Toronto still feels like a small neighbourhood.” Remedios, rounding out the glitterati trifecta, warmly notes that Toronto’s cultural identity is independent: “We don’t look externally for validation – Toronto supports its own.”