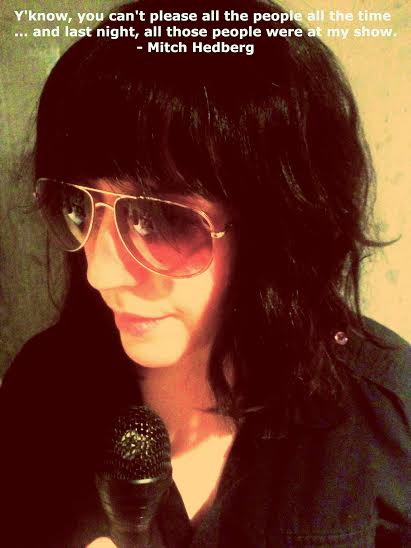 I once thought about being a stand-up comedian, then I realized that brick walls don’t bring out my best features (hey-oh!). Then I realized I have a penchant for terrible jokes (see above).

There was another problem: since stand-up comedy tends to happen in front of, you know, an audience, everyone gets to witness your failures and successes. And some of those watching feel like entitled to share their opinions about it, becoming my greatest stand-up comedy fear: hecklers. I’ve seen performers open up, make themselves vulnerable, only to have someone interrupt mid-spilling of their guts. It takes a certain kind of bully to be a heckler.

I had an interesting experience with heckling last week. Having gone to see one of my favourite comedians, I was surprised when a group of men and women, each more stupid than the last, began making a slew of loud, sarcastic comments, each more stupid than the last.  Though she tried to be nice about it, the comedian eventually had to be stern with them. Lesson learned: sometimes you have to lay down the law to be heard.

Thinking back to the way I’ve seen other performers handle hecklers, there’s a lot of wisdom that can be taken away from watching comedians get plastered know-it-alls to stop making face noises. In no particular order, here are the top lessons:

1. Patience
I once saw a comedian simply repeat “Please stop heckling me” to someone who was attempting to speak over them. The comedian didn’t change their calm tone but also didn’t let up until the heckler was silenced.

2. Ingenuity
After a front-row heckler kept swearing through each comedian’s set, the one on stage announced his bright idea: “Instead of waiting for laughter after every joke, the DJ is going to play some house music and you guys can all watch me dance.” Without any quiet moments between jokes, the heckler was confused and quickly shut up.

3. Empathy
“I think I know why you’re speaking. You secretly wanted to be onstage all your life but you were always too scared. And maybe now you’re really lonely. Maybe you secretly wish more people would pay attention to you and I understand that,” I once saw a comedian say to a chatty audience member. Such earnestness somehow got the audience member to pipe down.

4. Tenacity
A fight broke out between a comedian and a heckler–it actually almost came to blows. Somehow, despite things turning violent, the comedian kept telling jokes once the heckler had been kicked out. Can you think of any other profession where this would be expected of you, aside from, I don’t know, being a cop?

5. Fearlessness
A cousin of mine had a brief stint as a stand-up. She said it made her fearless. I hope to one day approach people who try to make me feel less-than-stellar about my work the same way Patton Oswalt does here. Fearless and pissed yet somehow creative.

The way a bully could never be.