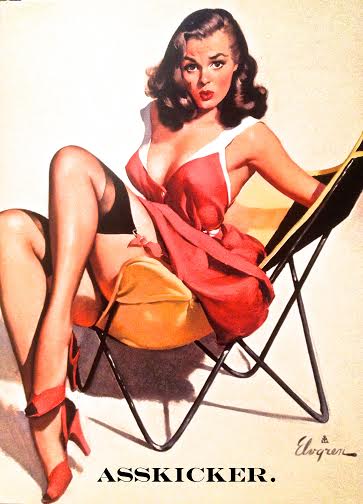 It Wasn’t That Bad: I Am Not My Dress

I would never consider myself a fashion aficionado (unless staying up past 2am to watch episodes of Under the Gunn counts), but I do enjoy when conversations turn to clothing. That’s probably why my recent exchange with a woman I sorta know who’s 7 years my junior threw me. An excerpt:

Woman I Sorta Know:  Hey, it’s nice to see you wearing jeans so much again.
Me: What?
WISK: All those dresses you were wearing were nice but they were a bit too feminine, don’t you think?
Me: What?
WISK: There’s nothing wrong with them, but you know, they kind of make you look weak.
Me: WHAT??

I wanted to show her just how strong years of dress-wearing had rendered my bitch slap, but I’m an overly analytical pacifist, so instead I took a moment to consider the fashion skeletons in my own closet. Most of my fashion sense has been (mis)guided by comfort. If an outfit turned out to be bold, so much the better, but mainly it had to feel good. Examples of this include a warm neon yellow vinyl windbreaker-hoodie I thought was the shit in 6th grade, large blue and red clown-esque sneakers I often tripped over, and a ratty orange scarf I thought went with everything and so wore with everything until it made me sick because it was so full of bacteria (it hadn’t occurred to me that one could wash a scarf) (Where were you on that, 25-year-old Erica? Where??).

This WISK’s comment also brought to mind the fact for a long time, I’d convinced myself and others that dresses and skirts “weren’t for me.” “I’ve hated dresses since I was a kid,” I’d proudly assert, as though this deserved some kind of medal (it doesn’t). But then a girlfriend managed to slip me into a dress she was giving away. Sweet fancy Moses. It was the closest thing I’d found to wearing pyjamas and I wanted more. MORE! I started wearing skirts and dresses almost exclusively. It was cozy and lovely and I didn’t look back.

A few months ago, I added jeans back into the mix after not having worn them for years. Again, it was a decision based on comfort, but for the WISK, it was the difference between strength and weakness. In that moment of Totally Unsolicited Fashion Advice From a Younger Person, I had so many questions: Okay, I guess I could understand why you equate dresses with femininity and softness, but weakness? Really? By that rationale, am I right to assume you equate jeans with masculinity and strength? Is a person’s power solely demonstrated by whether or not they have to unzip an area near their crotch before taking a piss? Are you trying to argue that a female is disempowered if she’s wearing a dress? You must realize that you’re just reinforcing the superficial stereotypes about women you claim to be against and that labelling women who dress differently than you actually hinders everyone, including yourself? You DO realize that, right? Right?

I bit my tongue, though. After a long silence, I responded “You know, I think you should really mull over the implications of what you just said,” since it dawned on me that at her age, I had the exact same close-minded notions about what a woman’s outfit said about her strength. I thought it might be helpful to give the WISK more power by letting her figure it out on her own. Fingers crossed she learns about washing scarves soon, too.

Tags: Fashion, Feminism, It Wasn’t That Bad, Personal Essays, What Your Clothes Say About You