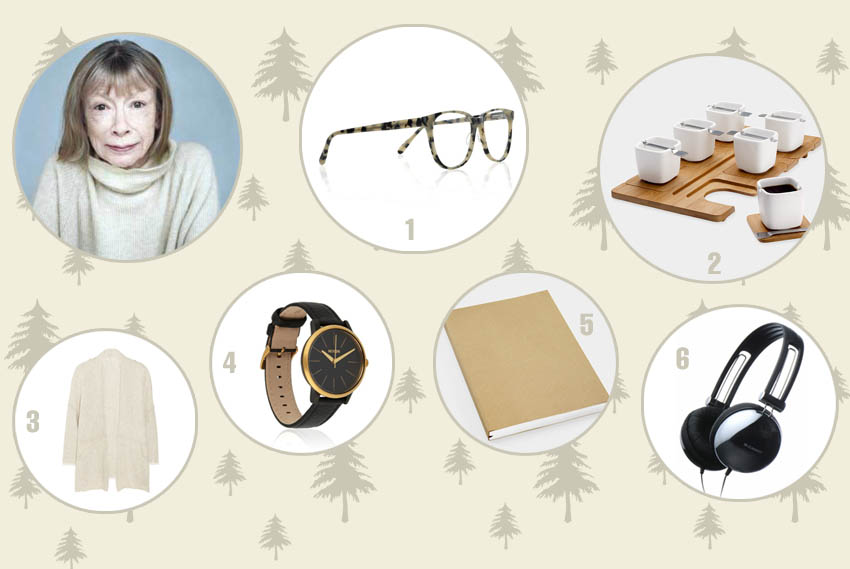 Joan Didion transcends objects, but if we were going to gift her, it would be one of these finer things.

1. Joan has always known how to rock a pair of frames, and we think these would suit her perfectly.
(Prism New York D-Frame acetate glasses, $375)

2. In her moving memoir about the death of her husband John Dunne, A Year of Magical Thinking, Didion describes friends who rally around her after she loses John, and bring her comforting Asian soup. We imagine Joan serving up piping broth in this structural espresso set.
(Fellina Sok-Cham Espresso Set, $55)

3. Joan’s fragile stature gives her the appearance of someone who is perpetually shivering. It makes us want to wrap her in something cozy.
(Inhabit Merino Wool-Blend cardigan, $580)
http://www.net-a-porter.com/product/177935

5. Joan’s late husband John Dunne was known to say that the difference between being a writer and not being one was carrying a notebook around. Ergo… (MUJI Notebook, $3.75)

6. Joan is a world traveller (it’s taken us awhile to get over her suggestion that a career in writing forces you to take off to all sorts of places you rather wouldn’t, like Toronto), and we imagine some music would make the long trips go by faster.
(Zumreed ZHP-005 Mirror Headphones $70)