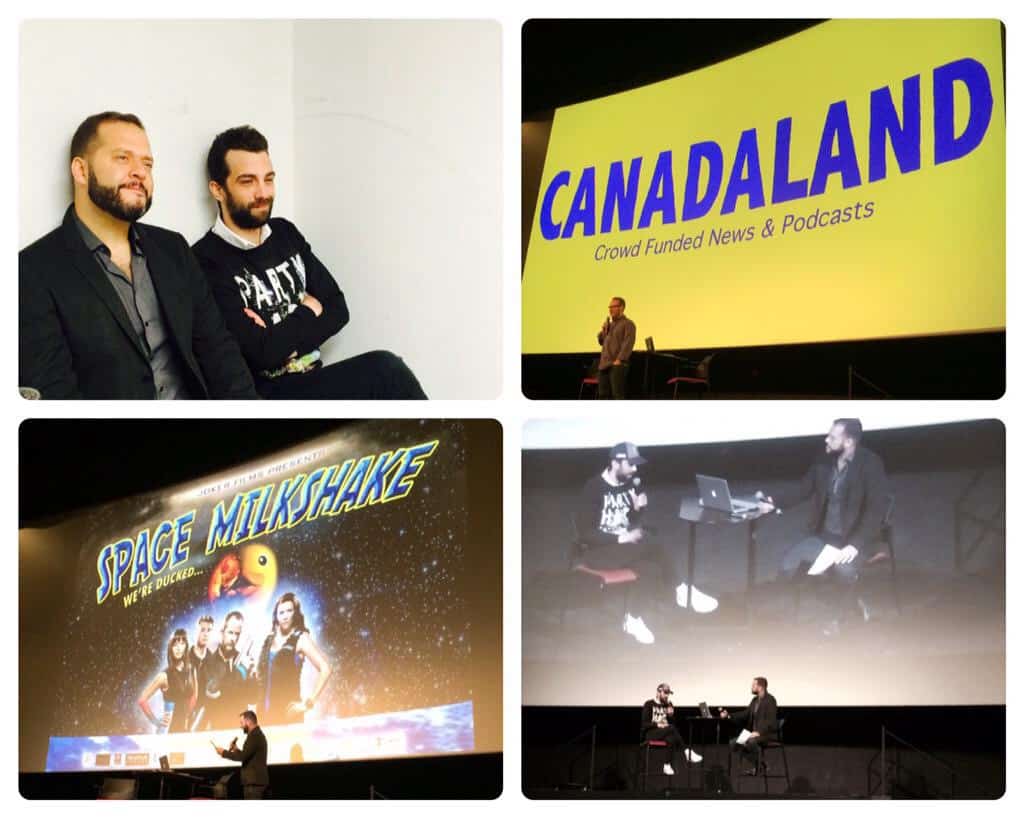 Last night at a live taping of his CANADALAND podcast, Toronto journo Jesse Brown sat down with actor Jay Baruchel in an attempt to solve one of Canada’s age-old conundrums: What the heck is wrong with Canadian film and TV?

As a freelance-writer-by-day and unemployed-TV-comedy-writer-by-night, it’s a conversation that I know too well. Many a G-chat and IRL conversations with my out-of-work newbie writer friends have revolved around the seemingly “brokenness” and exclusivity of our country’s entertainment industry. We constantly ask ourselves: How do we break into an industry that we love, for a nation that we love, that doesn’t seem to love us back? And, also – I hate to say this, but it’s true – do we even want to write for Canadian film and TV?

Brown opened the night at Bloor Hot Docs with a poster for the film Space Milkshake. Yes, that’s a real thing. It’s a Canadian flick that was released in 2012 and apparently features an alien rubber duckie. Whether or not you’ve watched it or heard of it (you probably haven’t), your precious tax dollars went into making it. The movie served as a perfect example of the current state of the Canadian film and TV industry: millions of dollars are being spent on movies we not only know exist, but also on those we probably wouldn’t want to watch anyway (sorry, Space Milkshake).

“Something is broken,” Brown said.

Yes, indeed. But what exactly?

Brown was the night’s interrogator with Baruchel acting as a sort of star witness, attempting to answer Brown’s questions – everything from marketing issues to Canada’s identity crisis – with great earnestness and heart. The Canadian actor basically expounded further on remarks he made earlier this year about wanting to be a part of a thriving Canadian film and TV industry.

“What makes a Canadian project Canadian is something we all have to figure out,” Baruchel said at the time. “It doesn’t always have to be Laura Secord running through the forest. If someone is from Canada and they create in Canada, and the money and tax dollars go back into Canada, that’s Canadian art.”

Canada’s “problem” seems to lie within three repeating themes: the people who are in charge of creating shit, the people who market the shit, and our ongoing Canadian identity crisis. Baruchel argued that Canada spends far too much time comparing itself to the U.S. “We suffer from a small man complex. We are so eager to prove ourselves.”

The people who are in charge – the Canadian Zuuls of the entertainment industry – belong to an “an old boys club,” said Baruchel. They are allowed to keep making movies quite simply because they made something before that may or may not have been moderately successful. “There’s a whole generation of storytellers with stories that aren’t being told,” he continued, and later said it was a dream of his to run the CBC. “We have an opportunity here.”

In terms of marketing, Canada just doesn’t have the same huge budget that our American counterparts do when it comes to hustling and promoting our projects. (This explains why we’ve never heard of Space Milkshake before…for the most part.) There is a whole lot of pretty awesome Canadian content being made, but sadly we just don’t know about it.

Though the evening proposed more questions than answers, and some even labeled the evening as “cynical,” I left the discussion feeling a bit more hopeful than before. The first step in resolving any problem is acknowledging there is actually one. At least now the “brokenness” of Canada’s film and TV industry is open for debate amongst Canadians, and not solely contained within G-chats of emerging writers or inside circles. The future of Canadian art shouldn’t exclusively depend on its creators; without an audience, there is no art.

“This is not an unexciting time,” said Baruchel as the session wrapped. “There’s a pretty great pool of talent here to create good stories.”

Listen to the full podcast here on Monday.