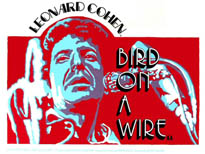 Bird on a Wire the 1974 feature-length documentary chronicling Leonard Cohen’s European concert tour, will be screened at Montreal’s Théatre Corona on Wednesday, May 11.

In 1972, British filmmaker Tony Palmer followed Leonard Cohen on tour, capturing footage of Cohen on stage, in the studio and “off duty.” After a brief run, the resultant film languished in rusted film cans for nearly forty years. The doc was believed to be lost forever until over 290 rolls of film were discovered in late 2009.

Lovingly restored by Palmer in 2010 to its nearly original form, Bird on a Wire is a fascinating portrait of the iconic singer-songwriter, musician, poet and novelist. The film features performance footage of Cohen’s spring 1972 concerts in Berlin, Vienna, Copenhagen, and Israel, as well as readings from Cohen’s poetry collection The Energy of Slaves.

Palmer will be in attendance to introduce this special screening of Bird on a Wire and will discuss the experience of making (and remaking) this long-lost classic.

Recommended preparatory viewing? Check out 200 Motels, a zany 1972 rock doc that Palmer co-directed with Frank Zappa prior to filming Bird on a Wire.