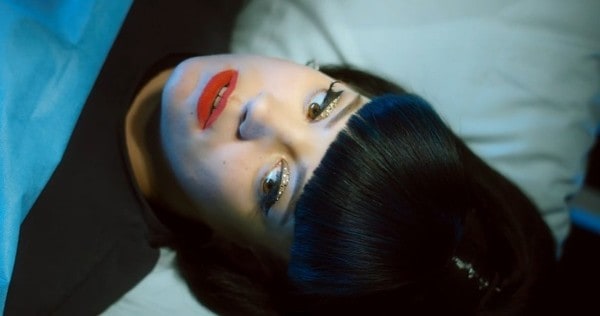 Lily Allen’s got a new video, ready the thinkpieces!

We love Lily Allen, you guys. She’s super British, she takes no shit, and Monica is pretty convinced ol’ LA  introduced her dad to the idea of feminism, which is a burn on Mon’s impassioned dinnertime speeches but if it means more feminist dads out there we’ll TAKE IT. Allen’s been out of the spolight for a while (she’s been busy having two kids, among other things) and we have missed her cheeky brand of pop-sass. Well, Lillerz is back and she has not forgotten how to make an entrance. The video for her new single “Hard Out Here,” a look at misogyny in the music industry and elsewhere, dropped yesterday.

Over the course of the vid she writhes around a car and rubs up on some twerking, champagne-popping dancers in bodysuits, singing lines like, “Forget your balls and grow a pair of tits, ” and “If I told you about sex life, you’d call me a slut,/but boys be talking bout their bitches, no one’s making a fuss,” before walking in front of some Robin Thicke-style letter balloons with a message so funny we spat out our drinks when it came onscreen. Although she’s purportedly satirizing a culture that sexualizes female (and especially black female) bodies, as well as out of control consumerism and gender norms, the video does sort of… well, consist mostly of glistening close ups of all of those things. Is it a case of displaying to dissect or is she merely giving people what they want and dubbing it satire?

We’re inclined to think the former–to us, she’s pretty clearly having a go at Miley and her ilk, and everything from the extensive auto-tuning, elderly man directing the twerking, and those perfect, perfect balloons points to that. What do you think? What do the blogs think?? For heaven’s sake, won’t someone think of the blogs!!