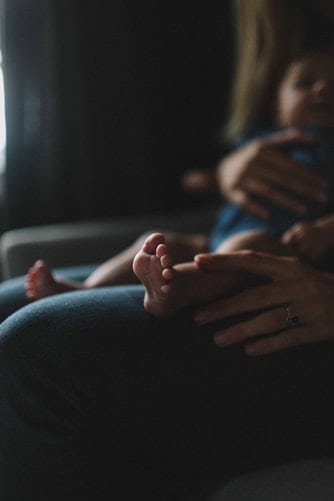 A Maelstrom of Anxiety: My Struggle With Postpartum Depression

Within a period of two years, she went from being a single woman and an actress on a long-running TV series, to being married, having a baby and moving to the suburbs. While pregnant, she remembers a friend telling her, “You have no idea what sleeplessness does to you.” She brushed it off as ridiculous; after all, she was used to getting up at 5 a.m. and working on a set for twelve hours a day.

Fit and active, she underestimated how gruelling childbirth would be. When the baby arrived, the excitement, pride and fulfillment of motherhood didn’t materialize. “My husband left town for work. The baby had colic. And I felt isolated in a city where I had very little friend or family support. I felt like I entered a cave where my only function was to nurse and keep the baby safe.”

Nights of endless baby crying and days of relentless boredom created a maelstrom of anxiety. “I did not know what was happening to me but I did not feel like myself. At the time, postpartum depression was something Brooke Shields was going through. Or it was a scary news story about a woman killing her child. I had no frame of reference for it as it pertained to me. I did not get help. I didn’t know I needed it. I thought, this is my life now and I will have to cope.”

A few years later, she had emerged from the fog and was back living in Toronto. She began to reflect on her experience. Working alongside an old friend and theatre partner, Selina Martin, she felt a drive to re-enter her creative life. They began workshopping ideas. “Selina and I loved the idea of personifying anxiety and created two quirky characters who plagued humans with anxious thoughts: “Where are your keys? Did you forget your keys? Oh GOD, you forgot your keys! Why are you so fat? What’s that sound? A burglar? Oh GOD IT’S A BURGLAR!” And other thoughts that kept us awake at 3 a.m.” It was then when she realized she was writing about her own struggles with PPD.

“With A Blow in the Face, I didn’t set out to write a play about postpartum depression at all,” she says. “I wanted to express my truth about the funny, absurd, and sometimes dark journey from womanhood to motherhood. When I started doing readings of the play, I received feedback from women of all ages about their experiences postpartum. I heard stories about fear of living up to a standard, dark thoughts, resentment of partners; stories that had been kept quiet for fear of judgement. It is baffling to me that we have so much shame surrounding such a profoundly life-altering and almost universal experience. Parenthood is no joke! It can be wonderful and mind-blowing, but to deny that the shift can be difficult is harmful. I wanted to communicate, in a creative way, that this experience can feel disorienting at times and also to affirm that this is all valid.”

She wants people to know that postpartum just means after childbirth. “I feel the term postpartum is now automatically linked with depression. But the postpartum period is understandably a time of hormonal fluctuation, shift in identity and previously unconceived-of sacrifice,” she says. “Some women handle it fluidly; some experience depression or anxiety. No two women experience it the same way.”

She hopes that her play will open the door to conversations about postpartum and demystify an issue that’s been taboo for far too long. “You are not alone,” she says. “There is no shame in what you are going through. Many, MANY women have a hard time postpartum. It’s important to talk about. There is no shame in asking for help. DO ask for help from your doctor, from friends, your partner, a therapist. Connection and community will help.”

A Blow in the Face opens March 26 at the Franco Boni Theatre (1115 Queen St W). Get tickets here.