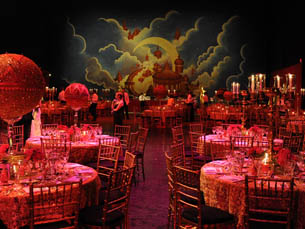 The theme of the night was Russian red—this girl didn’t get it, wore black—for The National Ballet’s million-dollar annual fundraiser MAD HOT: A Russian Seduction. Hundreds of suits and gown-clad gals (though I’m counting the ballerina bods as half-people) flooded the Four Seasons gala for a special performance of Russian classics (that’s Nijinsky, Tchaikovsky and Pavlova, you cultureless heathen) handpicked by Artistic Director Karen Kain (also in black; she’s awesome). The all-powerful swan overlord chose an eight-way lovefest from Musings, some geographic foreplay from Polyphonia, and a very suggestive man-in-the-mirror deflowering scene from Onegin (that would be O-nye-gin—not “one gin”, as in with tonic).

Though there’d be plenty of those to follow: after the show, the patrons—donning diamonds and sky-high Louboutins and I even saw some pink fur—went to a better place with an on-stage (you heard me) VIP gourmet feast by celebrity chef Mark McEwan. As Suzanne Rogers, Olympic skater Kurt Browning, Sexy Rexy and the CTV gang dined alongside the big ticket supporters, the rest of us, mostly dance loyalists and lucky media peeps, indulged on special Russian-inspired “Cosmonaut” cocktails—though supplies were quickly depleted, just as the Russians would want it. We somehow managed, and then even more somehow scored a bouquet of flowers on the way out the door. Just like Karen Kain would, I noted, minus the tummy ache from excess hors d’oeuvres.

SAVE THE DATE: The Rosé Picnic Returns August 11 with Gourmet Fare from Chef Mark McEwan

Our Pick of the Week: Toronto Sandwich Fest

boombox, TIFF’s Annual Fundraiser, Is Back on November 2nd