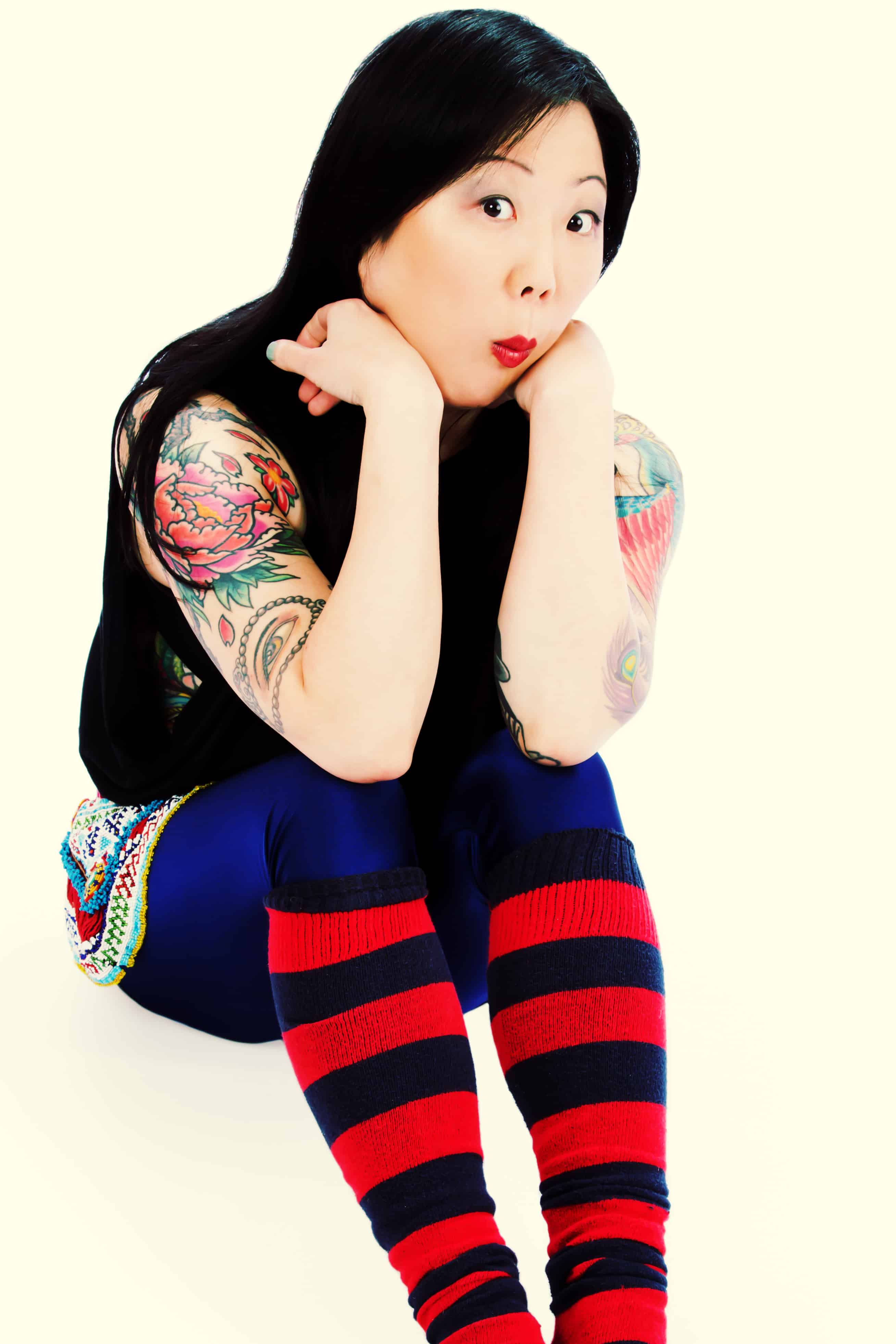 “Gurl I’m sewing a button, and you know how hard that is to do, when you’re holding the phone.”

I sat on the floor in my bedroom and waited for Margaret Cho to call, as one does. But this time it was for real. As we were finally connected, she immediately said “I love you.” I proceeded to poop my panties, but continued on. She apologized for calling me a few minutes late and snuck in a quick complaint about being her own “sweatshop.” A few more quips and we were fast best friends.

Daytona: Why is important for us to come together and support women in comedy?

D: What is your favourite swear word?

D: I say that all the time.

M: It’s like I’m gonna fuck my origin. I can’t so much, that I’m fucking my origin.

D: What is one word we should use more?

D: What is one word we should all use less?

D: Dolce and Gabbana have recently called children conceived with in vitro fertilization ‘synthetic’. Do you think this is a blatant attempt at free publicity, or just idiotic?

M: Well, first of all everyone is calling to boycott Dolce and Gabbana. But nobody has bought Dolce and Gabbana since Warren Beatty bought Madonna that ugly blouse in Truth or Dare. Honey, there is no such thing as synthetic children, but there is such a thing as synthetic fabric–which you use–too much, in your ugly clothes. I said ugly and I shouldn’t have said ugly. But in this case I think it’s deserved.  I want to say Elton John better work. Dolce and Gabbana better stop outsourcing their lines to baby girls in China, and sew a fucking garment yourself.

D: What is the most challenging obstacle in your career?

M: Getting my period and shitting my pants on stage. I have overcome it because I used to have a terrible eating disorder, so I used to take this weird drug, which would literally make me shit orange pizza grease out my ass on stage. And it was a phase when I was literally wearing all white. I mean this was the early 2000’s, like I’m gonna be baptized, a very all-white, imitation-of-Christ look. But then I stopped taking drugs and I learned my life is more valuable than being thin.

D: I’m hungry now. Is there anything off limits in your comedy?

M: I don’t want to hurt people’s feelings, but I also want to point out the truth. So you know, it’s a complicated thing. Sometimes reading people, actually reading people can be hurtful. And can be really funny.

M: To filth! And she is the person I’d reach out to if I bombed. Or if a man hurt me. And she was there.

D: If the whole world suddenly went back in time to the 1950’s and gender roles were reversed, what is the first task you would make the men perform?

M: Or a high heel. A corset and a high heel all night. A corset, full face a makeup, starving because you can’t eat with a corset on, and high heels. And try to be witty and charming. And breathe.

D: Story of my life.

M: Story of all of our lives.

D: I adore the impersonation you do of your mother. Is there anything you like to surprise her with when you visit?

M: Laundry and the dishes that she brought food over in, that I haven’t washed yet so now the food is all hard in the CorningWare.

M: These are the things that I love to bring her.

D: What is your favourite part of Canada?

M: I love Banff, I love Calgary, I love Vancouver, I love Toronto, I love Montreal. I love my friends in all of these places and I love the country itself. It’s a wild frontier in a way, it’s so progressive politically, it’s so queer. I love Bruce LaBruce; I love the Kids in the Hall, especially my husband Scott Thompson. When they came to America it was like the Beatles. I love so much about Canada.

D: I’ve got one more question and I’ll let you get back to your life. What are you binge watching?

M: Tina [Fey] and I, we were working on a couple other things . And I’m so gonna beg her for a job. I’m like; ‘Please Tina, Please Tina’. Tina did a pilot right before that that didn’t make it. Which was also genius. She is a genius and my good friend. And I’m obsessed with it.

D: Tell Tina I said hello! And next time you’re in Toronto I’ll treat you to a bottle of water and some fries.

D: Thanks so much for you time. We hope to see you soon.

Be sure to catch Margaret Cho LIVE at the Danforth Music Hall on Sunday May 3rd for the SheDot Festival Gala! Get your tix HERE.