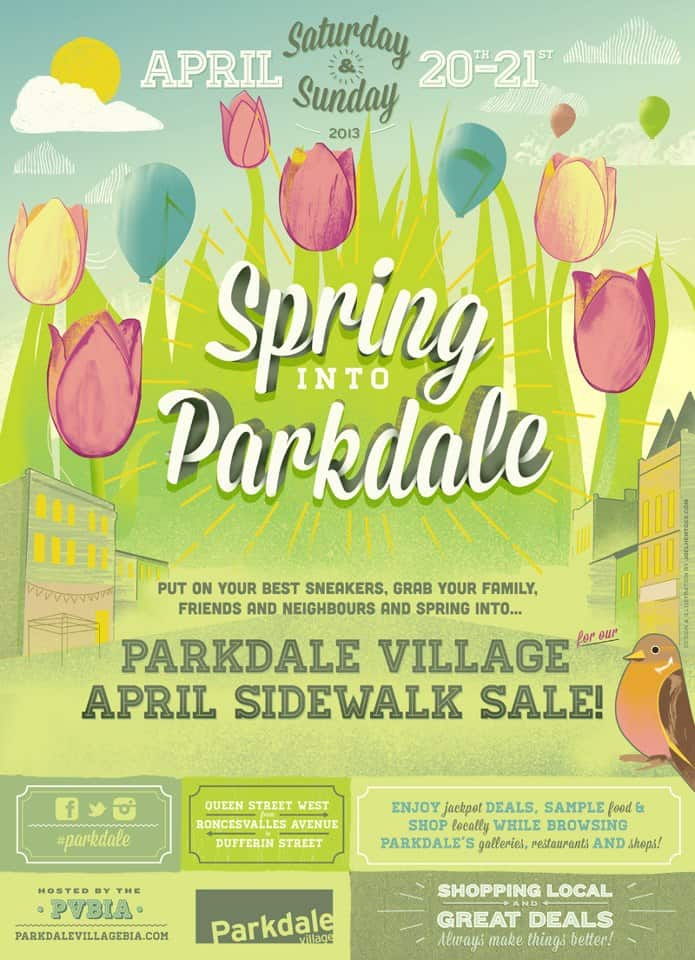 Ahoy there, mates! Here are a few upcoming events we’re really stoked on.

Super great Kensington vintage store Pretty Freedom (165 Augusta Ave.) is turning three! Celebrate with them at their shopping party from 7pm to 11pm, which will be followed by an after party at the Market’s Handlebar (159 Augusta Ave.). Three cheers/beers for PF!

As you probably already know, Parkdale rules. You’ve got great coffee with The Mascot and Capital, great food with Grand Electric, Porzia, and Chantecler, great bars with The Rhino and Pharmacy, and great shopping with…way too many awesome places to list. Head to this up-and-coming ‘hood for an awesome day of food, drink, and shopping. I really, really hope it doesn’t rain.

Girls Rock Camp, an organization that provides a safe space for girls aged 8 to 16 to learn instruments, write songs, and perform, is hosting a concert to raise money for its programs. Taking place at The Garrison (1197 Dundas St. W.) and in partnership with Swap Don’t Shop, this afternoon party promises good music and sweet clothes. Listen to tunes by The Bicycles, Blonde Elvis, Persian Rugs, and Sphinxs, and swap your good quality used clothes for other awesome stuff (for each item you bring, you get a ticket that allows you to swap for something else; max. 30 tickets per person). The swap starts at 12:30, and the concert kicks off at 1pm. Entry is $5 if you just want to see the bands, and $8 if you want to swap. This event is all-ages, plus they have on-site alterations and a nail art bar.

Wednesday, May 1: Inside Out 2013 Festival Launch Party

Celebrate the beginning of the 23rd annual Inside Out LGBT Film Festival with its opening party at The Burroughes (639 Queen St. W.). There will be music by DJ Craig Dominic, a silent auction, food, drinks, and film previews. You don’t have to pay to get in, but they are suggesting a donation of $10. It all kicks off at 7pm and wraps up around 11pm. The festival itself runs from May 23 to June 2.