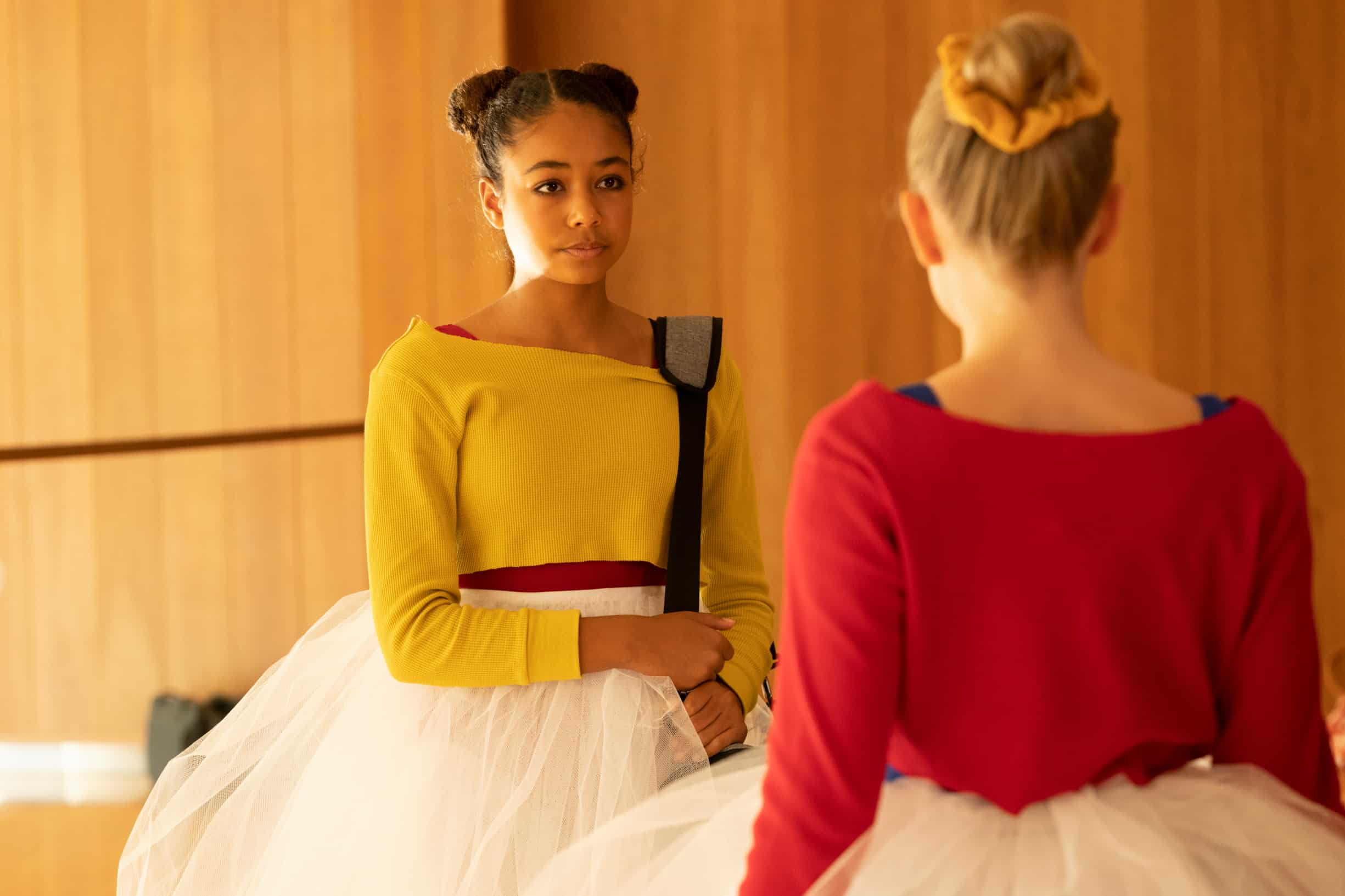 "In terms of storytelling it stands on its own. I have yet to see a show that allows you to see a family through two different lenses, that is what makes the show so impactful."
Series

You may have already read about The Parker Andersons and Amelia Parker, two new family sitcoms arriving to Super Channel Heart and Home next week. Both series have been making waves in the media for a variety of reasons that you can (and should) investigate here and here. The conversations that have emerged are important and necessary.

This piece is about spotlighting two young Toronto actors who give standout performances. 14-year-old Millie Davis (Orphan Black) and co-star Devin Cecchetto (Ginny & Georgia), play siblings Amelia and Victoria, who are learning to coexist under the same roof. Both shows follow the lives of an interracial family, blended by marriage.

The Parker Andersons and Amelia Parker tackle topics like grief and the stress that comes with growing families with tenderness and humour. Each show can be watched on its own, but the overarching plot lines make it more interesting to watch together. It’s a TV treatment that we’ve never seen before, which allows for more perspectives from the characters to be shared with audiences, especially that of young Amelia, who’s grappling with big changes in the wake of her mother’s death. 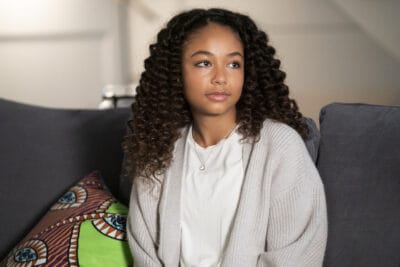 There are so many things that make these two shows unique. What was it that made you want to be part of The Parker Andersons and Amelia Parker?

Millie: I was initially attracted to the character of Amelia. I knew it would be fun playing a girl of a similar age struggling with the same every day things I do! I also loved the idea of being part of a family sitcom as I had never done that before. The diversity being shown on screen was also a real draw. Finally, the idea of filming two shows at once that are related but different was a concept I thought was pretty cool and something I had never seen done before. And who could pass up the challenge of doing it all with a British accent! I was excited to be a part of these shows for all those different reasons.

Devin: When I first read the audition sides there was something about Victoria that really clicked with me. I enjoyed who she was—a smart, quirky, competitive, energetic young woman. There was something so interesting about how Victoria fit in with this very unique family. I immediately fell in love with the relationships and connections between each character. I knew the show would tackle important and challenging topics with a balance of humour and heart which makes it so special.

What themes in the shows did you relate to?

Millie: Well in fact, the situation in the first episode of Amelia struggling to find appropriate makeup for a dance recital was really similar to one that I had when we got the makeup requirements for competitive dance. They were clearly written for white girls and I had to alter to fit my skin tone and worried about what others would think when I didn’t adhere to the strict protocols.

I definitely also related to the themes of families coping with busy schedules and teens being concerned, and overly obsessed, with their social lives!!

Devin: Family and inclusion. Family has always been very important to me. Being a part of a show with so much heart makes me feel honoured. There are many great themes in this show but I truly hope audiences will come away with an understanding of how important family is. 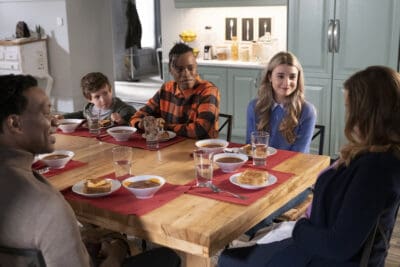 It’s hard to compare these shows to anything else, but have they reminded you of any other series?

Millie: I really don’t think these shows and the concept is like anything else I’ve ever seen. The closest fit in terms of style, would probably be Full House and Modern Family (both of which I loved by the way).

Devin: I get a Modern Family and a Blackish vibe In terms of the fast-paced nature and family connections along with the cultural topics. In terms of storytelling it stands on its own. I have yet to see a show that allows you to see a family through two different lenses, that is what makes the show so impactful. Seeing Amelia’s reflection of the day after watching the Parker-Anderson’s family episode is intriguing and creates a deeper understanding and appreciation of the family dynamic. Truth lives in listening to many sides of the same story. The writers have created something so profound, you get an opportunity not only to learn from your own perception but also from the perception of a 13-year-old girl.

What was it like to play sisters, in a newly blended family? How did you connect offscreen to bring chemistry on screen?

Millie: So I personally loved playing Devin’s sister. We connected immediately! She’s so fun and it was the best casting of an older sister that I could hope for. We definitely hung out outside of set and we still talk regularly now! Fun story, we had a great gingerbread house making contest over the Winter Break. Covid limits us being together in person now, but we are finding ways to stay connected.

Devin: Playing sisters with Millie was amazing. I learned so much from her on and off set. On set there was such a loving energy that sometimes we would get caught up giggling to a point of tears. We spent many lunches together with our other co-star Agape where we would share and listen to each other’s music, create fun Tik Toks or just talk about our life experiences. What I found so special about the filming process was due to Covid and the restrictions the cast was all in one special bubble. We spent time together at Christmas making gingerbread houses and throughout the 4 months of filming I saw my onscreen family more than my actual family. It created a really special bond on and off camera. 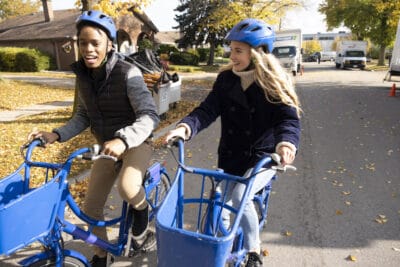 Did being in The Parker Andersons and Amelia Parker make you think differently about grief?

Millie: I think it just reminded me that we never know what people are going through.

Devin: Grief is a complicated topic that people will deal with in many different ways. I think in our show the Parker Anderson’s/ Amelia Parker did a great job of showcasing the family moving through the different stages of grief with a beautiful grounded light approach sprinkled with the right amount of humour. 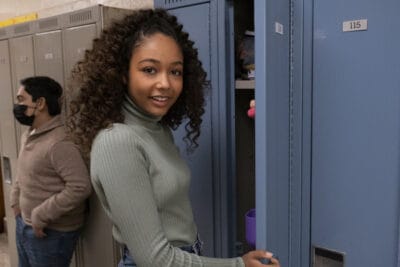 Millie Davis on the set of ‘Amelia Parker’ / ‘The Parker Andersons’

"In terms of storytelling it stands on its own. I have yet to see a show that allows you to see a family through two different lenses, that is what makes the show so impactful."