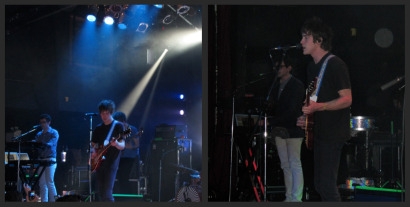 MGMT Has A Curfew? The Band Returns to the Mod Club for a "Multi-Layered Sandwich" of a show.

Words and Photos By Ivana Markotic

MGMT concert ticket two years ago: $13.75. MGMT concert ticket April 29th, 2010: $36.50. Almost two years to the date, MGMT returned to the Mod Club, but this time with their second album, Congratulations and an accumulation of hype. Naturally, ticket prices went up nearly three times in cost.

Arriving close to 8 p.m., the New York based band by way of Southern California, Willowz, was just wrapping up their set. Early? My thoughts exactly. MGMT have a habit of selecting equally entertaining opening acts to accompany their tour; two years ago it was Chairlift (hear: “Bruises” from the iPod commercial became a hit a year later). By 8:30 p.m., MGMT had already taken the stage and the sold out show was barely at capacity.

Founding members, guitarist/vocalist Andrew VanWyngarden and keyboardist Ben Goldwasser took the stage with three other live band members to a blinding salute of camera flashes. It was only fitting their first single “Flash Delirium” from their new album was the introduction to the set. After a whirlwind conclusion to the opening song, they changed the pace for Oracular Spectacular’s “The Youth.” Quickly, the pattern was evident of alternating between song from their first album and Congratulations, resulting in a multi-layered sandwich between electro-pop and 1970s psychedelic rock.

Exchanging his electric guitar for an acoustic one, VanWyngarden runs into a technical glitch at the start of “Songs for Dan Treacy.” Never missing a beat after that, “Electric Feel” garnered handclaps and the last song “Brian Eno” felt like a euphoric race with the sped up tempo.

Returning to the stage after uproarious demand for an encore, “Destrokk” from their EP was played before VanWyngarden introduced “Congratulations” as being “partly inspired by a Canadian band, Neil Young.” Finally, like their previous concert in Toronto, the anthem “Kids” was saved for last. Leaving their instruments and adopting two microphones, Goldwasser and Vanwyngarden dance around the stage and sing the lyrics, seeming like karaoke installment.

MGMT scores an A- on this performance report card. The show wrapping up a little before 10 p.m., this is the earliest time I will return home from a concert.

In the bathroom, several girls proclaim they only made it in time for the encore. It’s okay ladies, the majestic show that is MGMT will be back in Toronto on August 5th at the Kool Haus.

Gotta Get With My Friends: A Valentine’s Spice Girls Party