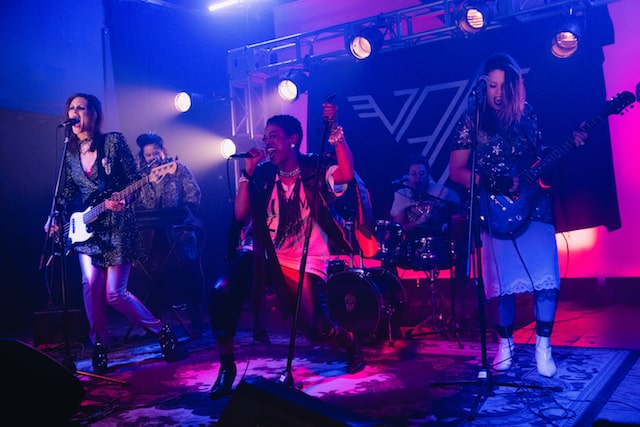 Infertility, a lacklustre marriage, and crushed dreams are just some of the mid-life issues that the characters of Band Ladies are facing before they ditch their book club to start a punk band.

Even if forty is the new thirty (whatever the fuck that means), we’re all ageing; mortality is on our minds. As such, it’s inevitable that once we reach a certain age, we’ll begin to examine our lives: what haven’t we done yet? Next comes a scrutinizing edit of our time: what is it that we want to do, and who do we actually want to spend it with? These are the types of questions that become the subjects of conversation in the first episode of Band Ladies, and daring to share their truths is met with a collective itch to radically shake up their lives.

The themes in this hilarious over-the-top web series will be familiar to many women approaching mid-life: turbulent hormonal shifts, a transforming body (I noticed my first white pubic hair the other day), and a feeling of invisibility. To channel life’s frustrations, some of us take up running, others pound it out at the gym, while many drown it all in wine. In the case of Band Ladies, the characters decide that shouting and thrashing around on the stage of a dive bar is the way to go. 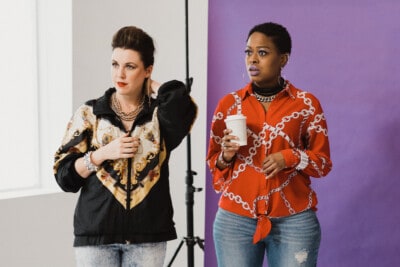 Directed by Molly Flood, and starring Kate Fenton, Dana Puddicombe, Lisa Michelle Cornelius, Vicki Kim and Kirsten Rasmussen, the crew of Band Ladies is a group of some of Toronto’s top women in comedy. The characters in Band Ladies are exaggerated and larger than life, and together they explore the question: what if a group of middle aged women blew up their lives to start a punk band? What would that look like?

It’s a spoof that also touches on serious topics: yearning for children and not having them, having children and losing one’s identity, loneliness, addictive behaviour, shitty husbands. If no issue directly speaks to you, the feeling of rage will.

“Somebody told me about a rage room, and I totally get that that’s in the ether right now,” says Kate Fenton. “I want to go to a room where it’s safe, and totally acceptable to just smash a whole bunch of stuff. Then I can let go of a whole bunch of anger I was bottling up and go back to my life.” The crew imagined that shouting on stage would give them a similar release, and it did! For both the characters and real-life actors. 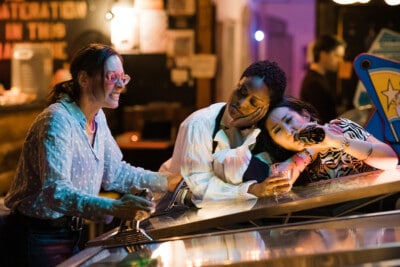 “The idea of getting on stage and pounding out stuff that’s imperfect, they’re saying exactly what they want and expressing exactly how they feel, as opposed to showing off a manicured, ‘perfect’ career, a highly curated FB page. They’re bursting through that. Some of them battle more with image consciousness, others with career pressures, family obligations. This gives them a place to shatter all of that,” says Dana Puddicombe. “It’s okay to do something and not be good at it, to enjoy the act of it, the process.”

Outrageous good fun, this series will have you chuckling out loud and possibly dreaming of what it would look like if you took a wrecking ball to your own life to smash up a tired routine.

Band Ladies will be exclusively available on Highball TV beginning on May 13.