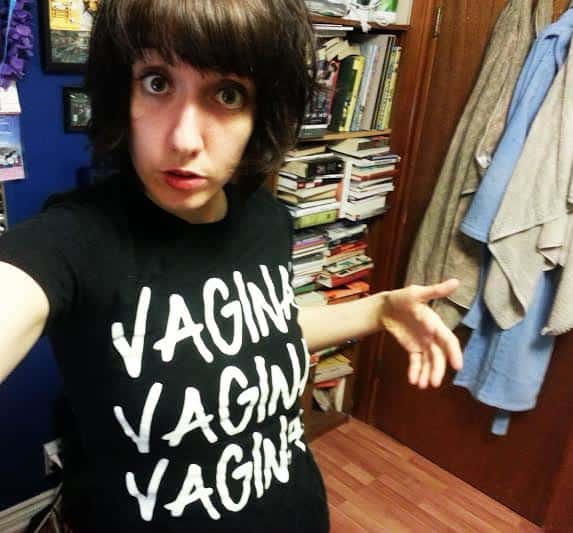 Mistakes I’ve Made As A Feminist

Most people who know me also know that I consider myself a friendly, loveable, militant feminist. I am extremely vocal about it and it seeps into everything I do: my writing, my comedy, my grocery shopping, and my napping are all feminist. So you might be rather surprised to hear that there was a time when I thought the term, which is now a part of my identity, was “just plain stupid.” Can you believe it? CAN YOU?? I can’t, especially now that half of my wardrobe consists of T-shirts that say “Feminist as Fuck,” “Nothing is More Cuterus than Your Uterus” and “Vagina! Vagina! Vagina!” (See photo above).

But my views didn’t always exist in the triple vagina realm. I have said some things in the past which I am not proud of. I think that every feminist at one point in their life has done something that they regret and I have surely made a few snafus. When I look back at these mistakes, I try to cut myself some slack, but also to figure out why they happened and make sure they don’t happen again. That “why” frequently has to do with how I was socialized as a young girl, what I was taught, and the media I absorbed. I’m not trying to shift the blame off of myself here, but at the same time I do owe major credit to Axe commercials for helping me achieve the below list of top five mistakes. Shout out to Axe, messing us all up and making teens smell intense since who knows what year, the worst year, probably.

Mistake #1: Not wanting to call myself a feminist.
My sister was the one who exposed me to the cause and at first I was incredibly hesitant to associate myself with it. Crappy TV, film, and advertising had graciously explained to me what feminism was and I didn’t want any part of it. Sure, I thought women should have the same opportunities as men, but THERE WAS NO WAY I WAS A FEMINIST THEY’RE LIKE SUPER NUTS. Until my sister, who I idolized, said to me one day “Well, I’m a feminist” and then shit got confusing. How could she, my kinfolk, a Nice-n-Normal, be one of THOSE? Those weird women who wanted to burn the boys I was interested in making kissy faces at. Turns out, that’s not what feminism is at all, as my sister helpfully informed me. Now when I hear someone spew a similarly idiotic description I say,“What is this, 1992? Do you not have the internet? Get with the times or get out of my face, I’m a feminist, thank you, bye.”

Mistake #2: Thinking period jokes weren’t funny.
This one is specifically shocking because I now have a comedy podcast called THE CRIMSON WAVE where we exclusively discuss menstruation, menstruating, and menstrual cycles. Yet, I used to believe that I didn’t have the right to tell jokes or even publicly discuss something that happens to me each month, for approximately a week, for an estimate of 40 years. That’s a lot of experience to be ignoring. I somehow got the idea into my head that this type of humour was lame, hack, gross, and a predictable “woman joke.” Hearing someone say “woman joke” today makes me vomit in my own mouth, but I once uttered those exact words. It’s even more maddening that I thought the material should be off limits for other females as well. I mean, who the hell did I think I was? Feminism encourages all women to have a voice, and to talk about whatever the hell you want whenever the hell you want to. You want to share some stories about tampons getting stuck inside of you and leaking through your Cargo Pants at a book fair in elementary school? Do it. I have and it feels amazing (talking about it, the book fair was hell, obviously).

Mistake #3: Judging ladies for wearing short skirts.
I used to be a server at a restaurant in the club district and I frequently left my place of work late on a Saturday night where I would encounter many women dressed in a variety of ways. I would observe the ones who were proudly showing off their bodies and think “That is dangerous and dumb of them to dress that way.” Once again I ask you, WHO THE HELL DID I THINK I WAS? What was dumb about it exactly? Let me tell you, nothing. Absolutely nothing was dumb about it. This is classic slut shaming and victim blaming. I was saying that these women were putting themselves in danger because of fashion, but fashion is not the enemy. The enemy is disgusting losers who assume that a woman wearing a particular outfit is an open invitation for their advances, when in actuality the only invitation is an actual invitation. We should feel safe in whatever threads we’ve chosen to wear and should never be reprimanded for sporting a hot low-cut top, a tight sequinned number, or a full-on nude spandex jumpsuit.

Mistake #4: Seeing other females as my competition.
I was taught as a kid that girls were not my friends, that they hated me, and I should probably hate them. Apparently I couldn’t compete on the same level as the dudes so I was supposed to take down all of the estrogen in the room in order to be successful. I never completely bought into this theory, and had tons of female friends growing up, but I did find myself comparing my achievements specifically to the girls in my classes, which was totally fruitless. Seeing women as your competition never helps you, in fact it actually hurts you, because you’re shutting out an entire group of people who could have been your allies. Now as a huge supporter of women in the arts I have learned that nothing feels greater than being the champion of your fellow sisters and having them be your champion too.

Mistake #5: Having a definition of what a woman “should be.”
Back in high school, I would hear myself make statements like “She should wear more makeup,” “She shouldn’t be wearing all of that makeup,” “That woman should have kids by now,” “That woman shouldn’t have five kids already,” “She shouldn’t just stay at home,” “She shouldn’t spend all of her time at work,” etc. etc. ETC. Women are held to impossible standards in every area of our lives. We are scrutinized for our physical appearance, our careers, our home life, our relationships, even our social etiquette and I was scrutinizin’ along with the rest of ‘em. And who did I scrutinize the most? Myself.

I tried to follow my own ridiculous rules, but the problem was that my definition of a proper little lady was constantly changing. One minute wearing makeup was stupid, another minute it was fundamental. So what was the right answer? There was no right answer. There isn’t one. Either way, women lost, when it should have been either way women win, because every choice does win. There is no “should.” You like lipstick? Great. You don’t like lipstick? Wonderful. You like shootin’ out babies? Perfect. You hate shootin’ out babies? Cool! You like working long hours? Congrats. You don’t like working long hours? Stellar! You’re awesome either way. I’m awesome either way. We’re awesome however we choose to be awesome. This perspective took me a long while to acquire, but once I did, my god was it powerful.

Forgive yourself for your mistakes, but try to move past ’em. We’re all in this together.