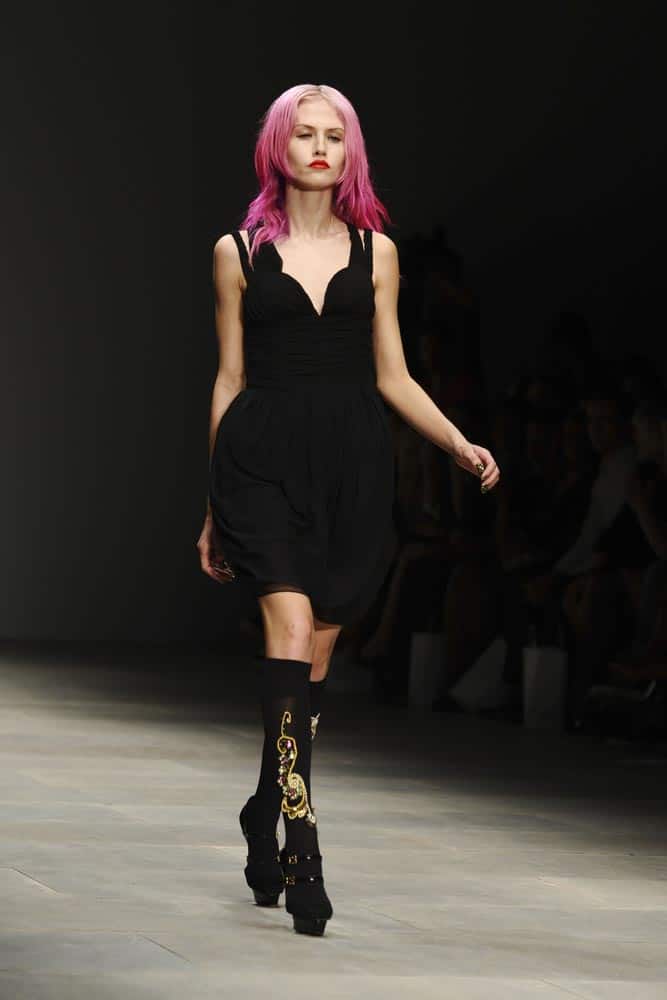 Charlotte Free is the model of the moment. She’s on the cover of the March issue of Flare, and she just landed a contract with Maybelline. Known for her “edgy look,” she’s also courting controversy outside of the pages of fashion magazines. Recently, she made some pretty unsavoury comments on her Tumblr account in support of Terry Richardson, the fashion photographer who has faced several allegations of sexual harassment throughout his career. It all started when a user asked her how she felt about “all of the negative accusations against Terry Richardson.”

Here was her response: “i love terry’s raw sexuality, it’s one of the things i really admire about him. Terry likes to do sexy stuff, that’s his shit. If you don’t wanna be part of it, make it clear in the beginning. Don’t willingly blow the man and get all mad and ashamed about it later… I hate when girls say ‘but he asked me to.’ you should have said no then, stupid bitch! there’s plenty of other girls waiting in line, so he’s not forcing you to do shit. When you make a choice you have to live with it – unless someone got you fucked up against your will. That’s how I feel about it.”

The number of models who report inappropriate conduct and refuse to work with Richardson keeps on growing. Freelance model Felice Fawn claimed that Richardson offered to work with her in exchange for sexual favours. Coco Rocha revealed that she wouldn’t work with Richardson again because her experience with him was “uncomfortable.” Rie Rasmussen even confronted him at a Paris fashion event, saying, “I hope you know you only [bleep] girls because you have a camera, lots of fashion contacts, and get your pictures in Vogue.” And most notably, Jamie Peck wrote about her experiences working with Richardson, wherein he asked her to make “tampon tea” (it’s exactly what it sounds like) and encouraged her to give him a hand job. She obliged, but explained that the whole experience felt like it was out of body: that it was like she was watching it happen to someone else. Coincidentally, this is the same kind of phenomena that is often reported by rape victims when asked about their attacks.

The fact that Free dismisses anyone who has accused Richardson of sexual misconduct as a “stupid bitch” reflects the attitude that much of society still has toward victims of sexual assault. The onus to change what happened is always put back on the victim. Rather than admitting that Richardson shouldn’t be undressing and asking models to give him hand jobs, Free insists that if they were really so uncomfortable, they should have just left because there are other models who will go along with whatever the photographer wants to do, whether it’s appropriate or not. Ironically, Free’s words reveal what makes it so easy for Richardson to exploit young models. There are indeed “plenty of other girls waiting in line.”

It’s not unreasonable to think that a young model who might be on one of her first jobs would feel obligated to do whatever the photographer wants, whether she’s comfortable with it or not. After all, if she walks off the set she’ll have to deal with an angry agent who probably won’t want to book her again because she’s “difficult” to work with. So, all right, maybe “Uncle Terry” (as he reportedly likes to be called) doesn’t literally hold a gun to these models, but it’s easy to see how they can be manipulated when the choices are to either get naked and pose provocatively (or worse) or stand up to the photographer and potentially get blacklisted within the industry.

So where do we draw the line between what’s edgy and what’s skeezy? Richardson has never been officially charged with anything, but it’s easy to see why his reputation is unsettling. Either way, calling a woman who stands up for herself a “dumb bitch” isn’t going to get us anywhere.