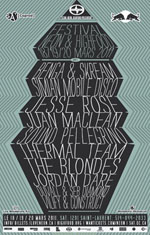 The Uncalled For Drunken St. Paddy’s Day Improv Show @ MainLine Theatre
The brave, initially sober men of the Uncalled For improve troupe will take to the stage, and begin drinking as well as creating spontaneous comedy AT THE SAME TIME. To the increasingly drunken delight of the audience, and to the spiraling dismay of the actors, Uncalled For will knock back everything that is sent their way, and knock out the most unhinged improv show you’ve ever witnessed. Pre-drinking at 10:30pm, show begins at 11pm. $12 admission includes a free shot. MainLine Theatre – 3997 St Laurent.

Montreal St Patrick’s Day Parade @ Along Ste Catherine Street
Brown-bag a Guinness and witness the largest St Patrick’s Day parade in the world, featuring floats, marching bands, Irish Queens and leprechauns, all dyed a mysterious shade of green. The Montreal Alouettes football team will be present to show off their Grey Cup trophy. Parade starts at noon at Ste Catherine and Fort and runs eastward.