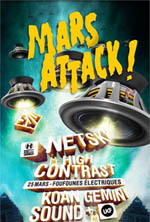 10pm. Project X – VICE Afterparty @ Le Belmont, 4483 St-Laurent. To mark the opening night of Warner Bros’ “Project X“, a movie about parties playing at Scotiabanque Theatre (977 Ste-Catherine West) on March 1st at 7:30pm, VICE will throw an afterparty at Le Belmont. Send your full name to projectxmontreal@vice.com and get +1 to the screening as well as the afterparty at Le Belmont featuring:

10:00pm. Strip Spelling Bee @ MainLine Theatre, 3997 St-Laurent Blvd. Another instalment of the popular Strip Spelling Bee event at MainLine. The game is played a lot like strip poker, but it’s a spelling bee, and it’s played in front of a live audience of hooters, hollerers and hecklers who want to see some smart and sexy skin! Sign up to spell, or come to cheer the spellers on. Sign up at 10pm (max. 15 strip spellers), bee from 10:30pm-midnight. $10 at the door. Spellers do not pay, and get a free drink.

10pm. Mars Attack @ Club Soda, 1225 St-Laurent. Mars Attack!, an electronic concert series happening over four nights this March, launches this Sunday at Club Soda with UK’s Koan Sound and Gemini . Then, Le Belmont hosts drum & bass acts Camo and Krooked on March 14; Club Soda hosts High Contrast and Dynamite MC on March 25. On March 31, the fest wraps up at Le Belmont with a performance by France’s Vitalic. Tickets for the March 4 show are $22, and are available here. A pass for the first three nights costs $40.