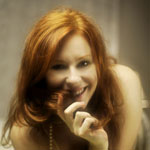 CC: Well, I have been doing coding for a while and I’ve been interested in web development for some time. My boyfriend and I had already been together for a decade and his background is in film and photography. We had been working together and independently on projects for other people, but it wasn’t incredibly satisfying. Our sex life was still going strong, in fact stronger than ever, and we just started playing around with shooting photos. As they became more erotic, we became even more excited and we decided to start a site called Dolorem.com.  It was successful and we started playing around with video, so we decided to open up another site with a more narrow focus called TheArtofBlowjob.com.  The progression was all pretty natural because it was something we did with support from each other.

SDTC: You always make the films with your boyfriend-has this experience strengthened your relationship? How?

CC: Oh, absolutely. It’s a creative project, a job and a sexual experience all rolled into one. We’re been doing this since 2006 and we’ve learned so much about each other in that time. We work well together, the onscreen sexuality fuels offscreen sexuality… It’s been an incredibly positive experience for both of us and our relationship is all the better for it.

SDTC: What are some of the biggest challenges in doing what you do?

CC: There’s a lot to balance and sometimes it’s hard to shut off and do other things, since part of the work I do is just being myself on social media and in my blog. I’ve taken up motorcycling in the past year and I’ve found that it’s a great tool to get me out and unplugged. Aside from that, of course there’s a stigma about sharing your sexuality, but I’ve largely learned to let that just slide off my back. I think what I’m doing is valuable and I’m proud of what I’ve achieved.

SDTC: Sexuality, especially on the internet, can be a tricky discussion. Why do you feel it’s important to do what you do?