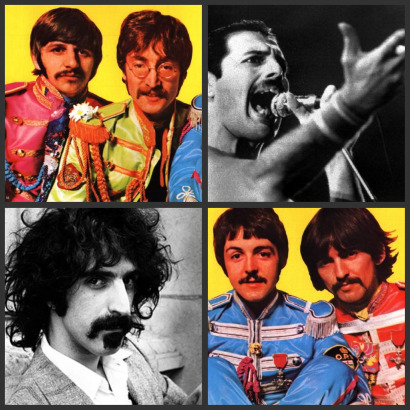 Movember Is The New November

Moustaches and rock go hand-in-hand. Just as a boy picks up his first guitar, he dreams of one day confirming his manhood with a perfectly groomed ‘stache perched above his upper lip. In honour of Movember (an annual November moustache-growing event to promote awareness of men’s health issues), let’s take a moment to appreciate all those men who rocked the look best.

The Beatles: There’s no doubt that Sgt. Pepper’s is one of the best albums of all time, but often overlooked is how it gave way to one of the first moustache supergroups, influencing many other bands for years to come. Sure, the matching band outfits are cool and all, but those moustaches are flawless!

Frank Zappa: A lot can be said about his quirkiness, but the man sported a damn good moustache. Heck, his imperial ‘stache was so influential that its image was even copyrighted by the Zappa Family Trust. That deserves a round of applause.

John Oates: Hall may have been credited with being the better vocal half of the popular 80s duo Hall & Oates, but Oates had that perfectly sculpted facial hair. Since shaving it off in 1990, fans have never let him live it down, and rightfully so.

Freddie Mercury: Mercury was not only blessed with wonderful vocal chords, the man knew what manhood is all about, rocking both a perfectly groomed moustache and matching chest hair. Men take note; this is what champions are made of.

Kings of Leon: They may be new on the scene, but they’re doing the look well. It’s no coincidence that their recent success came alongside the growing of les moustaches. Never underestimate the power of a little facial hair.