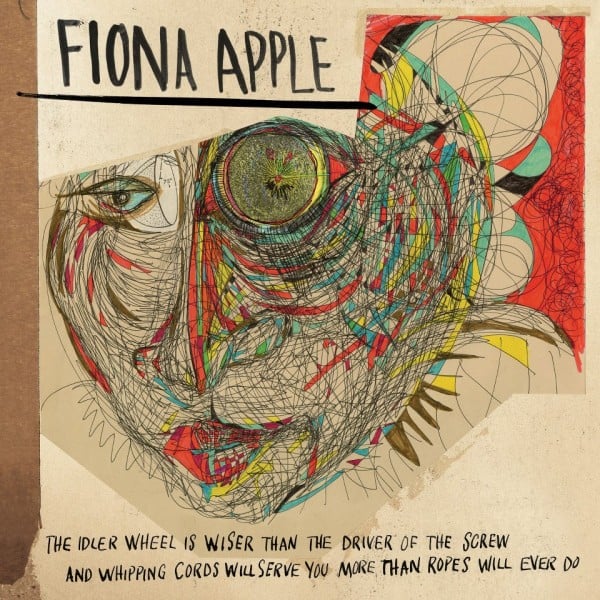 Okay, I know I’m almost a year behind the curve on this one, but let me preface this by saying I’m not some amazing hipster music lover. I rarely know about a hip new band before anyone else,  I enjoy music the way most people enjoy television, that is, in normal doses, often on the recommendation of a friend.(television, however, I consume in unhealthy quantities and excuse as “research”).  While my husband Chris was like Patrick Fugit’s character in Almost Famous, my relationship with music in high school leaned heavily on musical theatre soundtracks. Needless to say my taste in music has improved quite a bit as a result of our marriage.

About a month ago Chris told me that he had the latest Fiona Apple album, and suggested that we listen to it together while working on some projects at home. About halfway into the album, I basically stopped everything I was doing and just sat there absorbing the record. The wordplay of the lyrics is clever and perfectly melancholy. The music is complex and dissonant and somehow still incredibly pleasant. As soon as the last song ended, we immediately started raving about the album to each other, as if we hadn’t both heard the entire thing.

I have had it playing on my iPod basically non-stop since then. To say I am obsessed is obviously an understatement. I haven’t been this stuck on an album since I was a moody teenager listening to Damian Rice every night. Or the Thoroughly Modern Millie Soundtrack. You get the idea. The full title is “The Idler Wheel Is Wiser Than the Driver of the Screw and Whipping Cords Will Serve You More Than Ropes Will Ever Do,”  because it’s Fiona Apple,  and why not? Even though it was released in June I insist on calling it “the new Fiona Apple album,” because it is the most recent and it’s very new to me. Some people refer to it as “The Idler Wheel…” which is probably the most practical choice.  I’ve played it for my friends. I put several songs from it on a mixtape I made for my 17 year old sister. I recommended it to my 50 year old naturopath. I’ve listened to it at home, walking around the city, in car rides. I’ve had to physically stop myself from dancing/grooving on the streetcar when certain songs come on. It’s like an involuntary response where my legs start bouncing and I’m grinning like an idiot.

Basically this music is everything to me right now. And I am so, so happy about that.